The 26th collection of episodes from Mystery Science Theater 3000 arrives on DVD from Shout! Factory with two episodes fans thought would never arrive, along with two other episodes that are true gems, plus some entertaining and informative bonus features. 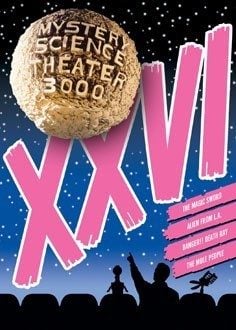 As I’ve stated in my previous reviews of these sets, judging the video quality of an episode of MST3K is difficult. The movies are usually in fairly bad shape, with sub-par transfers that the series’ producers had to contend with.The only fair thing to do is to judge the host segments, and the quality improves as you get later into the series. Disc one has some minor softness to it, but colors are consistent. The remaining discs are excellent, with increased detail and well-defined colors. Throughout all four discs, however, there are some brief minor anomalies inherent in the broadcast masters, such as dropouts, but these are few and far between.

As with Shout! Factory’s other MST3K boxed sets, the menu designs on each disc are themed with the episode, with decent CG animation, and are very funny. Also included in the set are a set of original comic book style mini-posters for each episode, identical to the DVD covers. All five discs come housed in THIN-Pak keepcases within a paperboard sleeve.Disc One (The Magic Sword):Bert I. Gordon: The Amazing Colossal Filmmaker (7:48): The famed B-movie director and special effects producer discusses his career.MST Hour Wraps (5:09): Mystery Science Theater Hour was a short-lived hour-long version of the series for syndication (splitting each original episode in half), with Mike Nelson, in his Jack Perkins character, bracketing each episode.Theatrical Trailer (2:41): The original theatrical trailer for The Magic Sword, presented in 16:9 widescreen.Disc Two (Alien From L.A.):Interview With Albert Pyun (8:26): The modern-day Ed Wood discusses making Alien From L.A. under his production deal at The Canon Group.Theatrical Trailer (1:23): The original theatrical trailer for Alien From L.A., presented in 4:3 full frame.Disc Three (Danger! Death Ray):Life After MST3K: Mike Nelson (11:57): Mike Nelson discusses his career, starting as a writer on MST3K, his novels, and starting RiffTrax as a way to continue the work he enjoyed on the hit series.Theatrical Trailer (2:43): The original theatrical trailer for Danger! Death Ray, presented in 16:9 widescreen.Disc Four (The Mole People):Of Mushrooms and Madmen: Making The Mole People (17:20): C. Courtney Joyner, Bob Burns, and Tom Weaver discuss the state of the horror film at Universal prior to the making of The Mole People, the mandates the studio made regarding the use of stock footage on lower budget pictures, and some of the issues the film had with the production code.Theatrical Trailer (1:59): The original theatrical trailer for The Mole People, presented in 4:3 full frame.

Shout! Factory continues to put a lot of much-appreciated effort into their MST3K sets, and the show’s fanbase will yet again likely not be disappointed with this release. Fans will also be pleased that many episodes long thought to be “lost” forever in licensing hell are finally getting released.

I got my copy today. I'm looking forward to watching it soon.

I also got my copy today.I will start watching this set tomorrow.I'm not even sure I've seen the whole episode of Mole People.

A word of warning: when it comes to MST3K sets, it's very important that you only buy from reputable sources. That means no eBay, no Amazon Marketplace, etc. I got hit with a bootleg with Volume XXV and it was literally the highest quality bootleg I've ever seen. You couldn't tell from the case or disc art. The discs themselves, however, were compressed from 8GB down to 4GB, which negatively affected the video quality. But even that didn't initially occur to me. If the mini posters hadn't been folded in half I never would have known.

I contacted Shout Factory directly and they broke the news to me.

So far i have the 18 box sets plus over 30 shows i recoded live on my vcr so this set will be next. Thanks for the warning about the bootlegs...i would have never guess that was happening.

It looks like the titles for Volume XXVII have been announced on the official MST3K Facebook page:

Alien from LA, my #2 most wanted episode just behind Time of the Apes. So I'm doublely happy.

The Hardy Boys!...and their load.
You must log in or register to reply here.