This 29th collection of episodes from Mystery Science Theater 3000 on DVD from Shout! Factory contains some forgotten gems from the series, particularly The Pumaman from season nine. Fans will likely enjoy many of the special features in this set, as well. 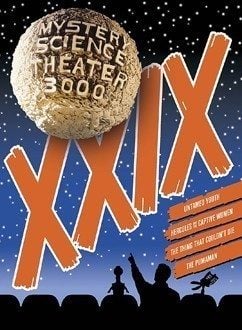 As I’ve stated in my previous reviews of these sets, judging the video quality of an episode of MST3K is difficult. The movies are usually in fairly bad shape, with sub-par transfers that the series’ producers had to contend with.The only fair thing to do is to judge the host segments, and the quality improves as you get later into the series. Disc one has some minor softness to it, but colors are consistent. The remaining discs are excellent, with increased detail and well-defined colors. Throughout all four discs, however, there are some brief minor anomalies inherent in the broadcast masters, such as dropouts, but these are few and far between.

As with Shout! Factory’s other MST3K boxed sets, the menu designs on each disc are themed with the episode, with decent CG animation, and are very funny. Also included in the set are a set of original comic book style mini-posters for each episode, identical to the DVD covers, created by Steve Vance. All five discs come housed in THIN-Pak keepcases within a paperboard sleeve.Disc One (Untamed Youth):Introduction by Joel Hodgson (1:43): Hodgson discusses season one and how this was their first film that wasn’t horror or sci-fi.Interview with Mamie Van Doren (7:04): The actress discusses how she was discovered and her work on Untamed Youth.About Joel Hodgson’s “Riffing Myself” (5:40): Hodgson talks about his limited-run one-man show.Theatrical Trailer (1:55)Disc Two (Hercules and the Captive Women):Introduction by Joel Hodgson (3:09): Hodgson talks fondly of this episode, particularly why Gypsy was brought into the theater at the beginning of the movie, as well as the Hercules series of movies features on the show.MST3K Artist in Residence: Steve Vance (10:33): DVD menu animator Dave Long interviews DVD cover artist Steve Vance, who discusses his approach to each cover and how the back covers began as a lark but Shout! Factory liked them so much they decided to use them.The Posters of MST3K: A photo gallery of all of Steve Vance’s posters he created for Shout! Factory’s MST3K releases.Disc Three (The Thing That Couldn’t Die):The Movie That Couldn’t Die (9:13): Film historian Tom Weaver narrates this documentary on the making of The Thing That Couldn’t Die.Theatrical Trailer (1:53)Disc Four (The Pumaman):Un-MST’d Pumaman (1:36:43): The original version of The Pumaman, and, unfortunately, is the same print and transfer used in the episode.Interview with Star Walter G. Alton, Jr. (24:32): Alton talks about how his career as a lawyer got briefly sidetracked by an acting career, making The Pumaman in Italy, and how much he dislikes the MST3K version.Much Ado About Nanites (3:46): Members of the cast and crew of MST3K discuss the evolution of the nanites.

Shout! Factory has put out yet another solid set of episodes from MST3K, and managed to come up with some pretty nifty special features that fans will likely eat up.