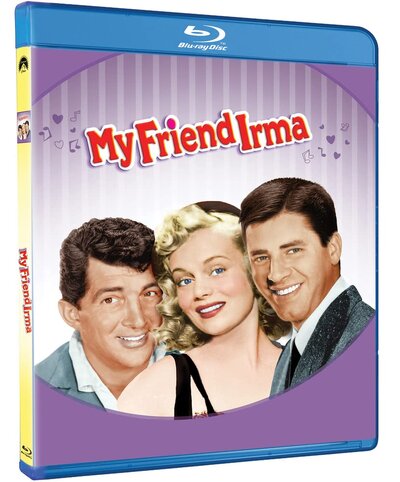 Well, I'll buy this; not for Dean and Jerry though, for Marie Wilson.

Not my favorite Martin and Lewis and the DVD looks decent enough but I'll buy anyway in the hopes it will encourage Paramount to release their better films on blu ray (Artists And Models, Living It Up, Hollywood Or Bust, You're Never Too Young, Pardners etc.)

The first pairing of the team affectionately known by fans as “the boys.”

From Mr. Crowther of The NY Times:

“We could go along with the laughs which were fetched by a new mad comedian, Jerry Lewis by name. This freakishly built and acting young man, who has been seen in night clubs hereabouts with a collar-ad partner, Dean Martin, has a genuine comic quality. The swift eccentricity of his movements, the harrowing features of his face and the squeak of his vocal protestations, which are many and frequent, have flair. His idiocy constitutes a burlesque of an idiot, which, is something else again. As a hanger-on in the wake of Irma, he's the funniest thing in this film. Indeed, he's the only thing in it that we can expressly propose as a reason for seeing the picture.”

Well this was a pleasant surprise.

ahollis said:
Well this was a pleasant surprise.
Click to expand...

I had an "accidental" conversation almost two years ago with someone who told me he was in discussion with Paramount to release their Jerry Lewis library to Blu-ray. I am hoping that this is the start of that negotiated deal. I do know that all his films are currently available in digital HD from the studio.

I bought this and have to say it was a colossal waste of money. Huge deficits to major portions of the image, marred by anemic grayscale and contrast, horrendous amounts of edge enhancement, and aliasing, and some age-related artifacts, which I could have overlooked if everything else was in check. It's not. Also, grain does not appear film-like, but clumpy. What a wasted opportunity to honor Martin and Lewis. Atrocious effort on Paramount's part. Don't waste your coin!
You must log in or register to reply here.