“When legend becomes fact - Print the legend.” That line, from The Man Who Shot Liberty Valance, surely could be applied to almost every iteration of Wyatt Earp’s life presented on the big screen. When the story, regardless of veracity, is embraced and repeated so often that it becomes all that is known of a person or an event, the legend has indeed become ‘fact.’ My Darling Clementine may contain more truths about this thin slice of Marshall Earp’s life, from John Ford’s meeting with Earp and he recalling of the O.K. Corral gunfight, than other films that have sharpened and emboldened Earp’s image (his legend,) but a reverence to the man remains companioned with a more measured approach to exploring who Wyatt Earp was. 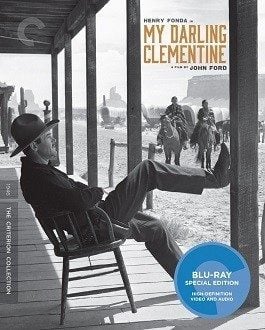 Running cattle across the unforgiving, untamed American west, the Earp Brothers rest near a town called Tombstone. Heading into the lively town for a shave, they leave behind the youngest brother to watch the herd. They find Tombstone to be a sprightly but unkempt town, uncultivated and prone to violence. Wyatt himself must step in when an unruly, drunk Native American dangerously fires off his gun, interrupting Wyatt’s shave, and the town Marshall, too scared to step in, quits. Wyatt is offered a job, but turns it down. He’s not interested in anything but getting his herd to California.

Arriving back at their camp, finding their herd taken by rustlers and their younger brother murdered, Wyatt has a change of heart. He heads back to town, accepts the job, and sets himself and his brothers on a road to justice that will ultimately culminate at the O.K. Corral.

Henry Fonda fills the shoes of the iconic Wyatt Earp character with a surprising evenness of emotion and expression. He neither rises with excitement nor becomes saddled with despair or grief, even when his brothers are killed. But Fonda, in burying the highs and lows of Earp, fosters a simmering torrent of capability and control. And in the framework of Director John Ford’s masterful film, where the mere mention of the name ‘Wyatt Earp’ steals smiles from criminal’s faces, he does not embrace or reject his widely known reputation. He simply does what needs to be done, and not much more. Ford wisely understates Wyatt Earp’s presence onscreen. Not interested in galvanizing a simple celluloid, Hollywood hero - with long strides and confident presence in battle and love – the director presents a tough and focused man, yes, but not an infallible gunslinger, nor sainted hero assured in love. Quite the opposite. Here, Ford crafts a straightforward man, experienced in the law but one who must have spent so much of his life committed to forging a civilized American West that he’d gained no experience or confidence in matters of love. The ruffling of his straight exterior when the lovely Clementine Carter, beautifully portrayed by contract actress Cathy Downs, arrives in town, is central to the story being told. Earp’s surprise, then caution when he discovers that Clementine has come to see Doc Holliday (Victor Mature,) is the antithesis of how heroes of the Old West were typically presented. It’s superb.

John Ford, arguably the greatest director of the Western genre, masterfully captures both the beauty and rawness of the untamed American West, layering the era with the towering glory of Monument valley (whether geographically accurate or not,) and painting his vision on the black and white canvas in tall, deep shadows, and complicated skies. Visually, Ford has no equal in his capture of the West, and My Darling Clementine is more evidence of that honor.

Maturity in its storytelling approach, assuredness behind the camera, and the braced and even performance by Henry Fonda in the Earp role, establish the greatness of Clementine. Watching Victor Mature wrestle with the unstable and , at times, angry Doc Holliday is a pleasure, and seeing Fonda and Mature morph their characters from untrusting, cautious men, to friends and brothers, remains a delight and a warm element of this masterpiece. And My Darling Clementine is the masterpiece it is considered because of a combination of magnificent contributions. Cyril J. Mockridge's alternately rousing and nuanced score (under the musical direction of the great Alfred Newman) is a strong contribution as much for when it is used as when it is absent. Performances from the entire cast support a high caliber. Victor Mature, returning to a serious role after more than a decade in lighter fare, is particularly good, with darkness.

At its very core, My Darling Clementine represents everything about the Western genre, a tale of good versus evil seeking to install order and allow ‘civilization’ to win out and take root among the untamed wilderness. The surprisingly unexpected approach to this most famous of stories, with Earp taking his time in Tombstone, faltering in matters of love, and carving a patient figure, often seated, against the dusty West, is an advanced approach to the narrative of the Western, and the sign of incredible narrative prowess in the hands of Ford, writers Samual G. Engel and Winston Miller, and producer Darryl F. Zanuck who may have tempered some of Ford’s bolder approaches, but helped tip the scales of the film to become a magnificent accomplishment.

Presented in its original aspect ratio of 1.33:1, My Darling Clementine is the recipient of a new digital transfer created in 4K resolution from a 35mm nitrate composite fine-grain held by the Museum of Modern Art. The print has been cleaned of considerable dust, debris, dirt, scratches and other print issues.

The work on the transfer is commendable. Film grain is intact, though not as untouched (or rather protected) in some scenes. Still, comparing the pre-release print version, available as a special feature on this release, one can see a less than pristine state of a print and an example of the work required by the technicians.

Blacks are very deep, contrast strong and detail rich. Smoke and dust, in rooms and streets respectively, have distinction, and the clever use of light (thanks to Director of Photography Joseph MacDonald, A.S.C) is allowed to shine.

According to the accompanying booklet, the original monaural soundtrack was remastered at 24-bit from the Museum of Modern Art’s 35mm nitrate composite fine-grain and restored at Audio Mechanics in Burbank, CA. Innumerable instances of clicks, thumps, crackles and other distortions were eliminated. The result is a highly pleasing 1.0 track that conveys with impressive depth the dialogue and the effective film score. The clarity on hand is where fans of the film will be most impressed.

Criterion’s presentation of Ford’s classic My Darling Clementine comes with a delighting batch of special features, the most welcome being the 103-minute pre-release version of the film that re-inserts several scenes and alternate approaches to moments in the final cut released to theaters. Also of considerable value is the comparison between the two versions by Robert Gitt, USLA Film and Television Archivist, who provides informative background, explanation, and suitable hypothesis for what was changed, and why. In all, there are hours of fun to be spent examining and reexamining this classic film.

A Bandit’s Wager, a 1916 short costarring Ford and directed by his brother, Francis Ford, featuring new music composed and performed by Donald Sosin

Though based on a real figure, one whom director John Ford had known as a younger man, the romanticized legend of Wyatt Earp’s life and deeds has long supplanted the realities of his accomplished service as Marshall of Tombstone. But My Darling Clementine isn’t really about the gunfight at the O.K. Corral, or Wyatt Earp’s establishment of his legendary status. It’s about the affect a beautiful women has on him and his friendship with Doc Holliday, and how, among a certain ruthlessness in Tombstone, he fights to make the town a place where ladies like the lovely Clementine Carter can come, attend church, and even someday run the school.

My Darling Clementine is a film produced with considerable caliber in front of and behind the camera. It is of little wonder this film has become revered as one of the greatest westerns ever made. By all accounts an atypical western, where gun slinging and saloon fights are secondary to an examination of a man and the woman who affects his life, My Darling Clementine is a wonderful, wonderful classic of American cinema.

Criterion has produced a stunning release and it is Highly Recommended.

I've been waiting for this release ever since it was announced!

Thanks for the review, Neil--making me want it even more!

Now I just need to wait for that next Barnes & Noble Criterion sale...

Earp lived to die peacefully at age 80 and be buried in Colma, the cemetery town south of San Francisco. The MoMA print Neil references is the one I used to watch in my youth. It is (was?) really gorgeous. MoMA stored many of the Fox archival nitrate 35mm prints and showed them periodically. Little did we know that so many riches would be lost within a few years!

One of the best westerns ever made and nice to see two versions of it too.
L

Just had to order after hearing all these good reviews found on eBay for 26.00

Thanks for the review Neil, will be picking this up for sure.I have the Fox Classic dvd which many of us probably have
it also has two versions of the film which I think look good by dvd standards. Looking forward to see Criterion's release.

Will definitely be added to the collection. Been waiting for it since it was announced (saw the announcement just as I was about to pull the trigger on the DVD and decided to wait).

Costco locations are selling this for $19.99.

Finally got around to watching this (I know, shame on me). Excellent classic western (and tonight at 11, ice is cold ). Looking forward to having time to go through the wealth of supplements.

Never did get around to picking this up. Might need to remedy that when the next Barnes & Noble sale comes around....

Watching this one now with the really insightful audio commentary by Joseph McBride, since I've seen it a few times before. Very good pq. Amazing to see it with this quality since the last time I saw it, maybe 15 years ago, it was rather blurry and dirty.
Last edited: Nov 27, 2016
You must log in or register to reply here.