My Beautiful Laundrette is a fine example of the kitchen-sink drama, with Pakistani culture in Thatcher’s England of 1985 the core subject of exploration, along with the rekindled relationship between two young men from different cultures. Though the subjects of racism, homophobia, and class struggle are candidly explored, and the inflective cultural identity of Pakistani immigrants among the capitalist-twist experienced by the UK in that decade are examined, the overriding spirit of the film is one of positivity. That it can find a wonderful streak of humor through challenges internal and external to one’s culture, is one of the great gift offered here through Stephen Frears keen direction and Hanif Kureishi’s potent script. 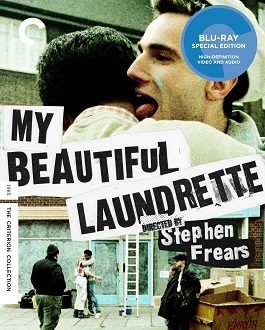 “Ain't nothing I can say to make it up to you. There's only things I can do to show you... That I am with you.”

Omar is listless. Caring for his ailing and alcoholic father, Papa, in a cramped London flat, he’s going nowhere. Papa, a former journalist of some influence in Pakistan, is a shadow of the man he once was, but he calls upon his brother, Nasser, to give Omar a job and get him off the dole (unemployment benefits), and into the veins of prosperity promised under Prime Minister Margaret Thatcher’s view of England.

Omar is naive, young and innocent, and he wears a positive spirit like a badge of pride. He happily accepts a job working for his uncle, and does well. He starts out washing cars at his uncles parking garage business but soon rises in estimation and esteem. Before long he is entrusted with one of his uncle’s under-performing and raggedy laundrette’s, and given license to turn it around. A chance encounter one evening as he’s driving his uncle’s right-hand man, Salim and Salim’s wife home after a party, reunites Omar with an old friend, Johnny. Omar is enchanted by the serendipitous reunion and soon reaches out to Johnny offering him a job restoring the laundrette he now runs. Johnny, still a member of a gang, jumps at the chance to do something more meaningful with his wayward life. Though his former gang friends feel slighted by Johnny choosing to work for a Pakistani, Johnny doesn’t care.

Omar and Johnny do some questionable things to secure the funds needed to complete the ambitious renovation of the laundrette, but their ideals are pure and their rekindled relationship brings about happiness for them both – against all odds and an unsuspecting (and, should they find out, disapproving,) group of family and friends.

Stephen Frears’ economic direction partnered with Hanif Kureishi layered script is both charming and bold, premiering in 1985 during the painful years in the UK for workers as the successes and deep failures of Thatcher’s government splintered the working class and made even harsher the lives of the underclasses and the under-served. My Beautiful Laundrette isn’t intended to be a social commentary of Thatcher’s England, but it is. It doesn’t serve solely as an exploration of a young, racially mixed gay couple, or the deep examination of racial attitudes among the poor and working classes during England’s transformative years under debatably the UK’s most divisive Prime Minister, but it welcomingly layers in so many fascinating ideas, people and places, that it delivers very capably on all these subjects. Largely, though, My Beautiful Laundrette is a sweet, dramatic, and darkly comic film examining a moment in time and a specific place in the world with the shifting, grating of cultures and class, and the unease within cultures of pursuing the ‘new way’ of making it serving as the backdrop to the various characters

Performances are uniformly excellent. Gordon Warnecke’s wide-eyed Omar grows the most substantially between the opening and closing moments of the film, falling victim to folly and a pursuit of greed that his friend and lover, Johnny, portrayed with great gift by Daniel Day-Lewis, finds discomforting.

“I want big money. I'm not going to be beat down by this country.”

Johnny and Omar had been friends when younger, but Johnny had fallen in with the Skinheads; the misguided and dangerous thugs who saw outsiders of almost any kind (race, sexuality,) as the reason for whatever ills marred their lives (typically unemployment). Daniel Day-Lewis is deliberate, handsome, and subtly complex as Johnny. He balances a certain physical threat prospects in Johnny with a longing for something better under the weight of low prospects. And his scenes with his former gang, all of whom feel betrayed by his now working for Omar, play out with a territorial discomfort.

Gang Member: Why are you working for these people? Pakis.
Johnny: It's work, that's why.

The rest of the accomplished cast add allure and nuance by turns, with Roshan Seth’s role as Omar’s father, Papa, displaying a great intellect hampered by ailments and alcoholism. Saeed Jaffrey’s Nasser – the generous uncle – is marvelously charismatic even as he cavalierly indulges in his white mistress and questionable business practices. He’s earnestly trying to make wealth and elevate himself in the ‘new England,’ but ultimately isn’t fulfilled by the wealth he achieves. Derrick Branche’s Salim, perhaps the most unsettling of the film’s characters, drips with contempt for Omar. Branche plays the role as an unlikely spoil with just enough weakness to invite sympathy. Shirley Ann Field portrays Rachel, mistress to Nasser, with grace and beauty and ultimately vulnerability. She’s quite lovely in the role and given a surprising and genuinely heartfelt moment late in the film during a confrontation with Nasser’s daughter, Tania (a spirited Rita Wolf.)

My Beautiful Laundrette at times feels like a play. Small, simply set, and existing just outside reality. There is striking authenticity in the film – in the feelings of the characters, in their words, and in the rough, worn, tired and depressed corner of England – but an almost fictional possibility wraps around the unpleasantness; around the hopeful and earnest relationship between the innately likeable Omar and Johnny as they work hard against all odds to turn a downtrodden Laundrette into a shining bastion of possibility.

Though coming to take charge of the run-down Laundrette, and renovating it into something surprising and exciting plays as the central plot device, the film exists to explore a moment in time with a collection of interesting characters with something to say about their station in that world at that time. It’s a fascinating film and one that has something important to say about England in the 1980s; something that sadly will still hold relevance today.

Originally intended as a television film, My Beautiful Laundrette was shot on 16mm. Director Frears and Director of Photography Oliver Stapleton make fine use of low-light locations and the drab of South London’s streets to imbue the film with authentic textures. For the Criterion Blu-ray release, a new digital transfer was created in 2K from a 16mm interpositive made from the 16mm original A/B camera negative. Almost every scratch and flash of debris has been removed preserving the wonderful grain and feel of the film. Colors are presented excellently and the paleness of the streets and contrasting colors of home interiors are superbly rendered.

The original monaural soundtrack was remastered at 24-bit from the 35mm magnetic track and is presented issue-free. Besides the sounds of the trains on the tracks outside Papa’s flat, the audio is tasked mainly to deliver dialogue – and does so cleanly throughout. The score by Ludus Tonalis is allowed to stand out during just a couple of well-timed moments where it signals the cheeky, lighter tone of the film. A pleasing, appropriate presentation of the audio.

A modest, but informative collection of special features are included on the disc, along with yet another fine accompanying essay in the fold-out booklet. The conversation between Director Frears and his producer on this film, Colin MacCabe is perhaps the most charming of the available extras, as Frears’ unflinching honesty and entertaining recollection of the era in which the film was made, prove fascinating.

My Beautiful Laundrette today plays like a surprising period piece, capturing the mid-eighties in London with considerable realism – even as the characters around that realistic London play out a story and moments in a somewhat heightened sense of real life. Bold for its time, Director Frears and team assembled a wonderful cast and elicited a fine set of performances from all involved. The love story that anchors the emotional center of the film is quite lovely and, among the dire socio-political commentary, surprisingly and warmly hopeful.

Thanks for the review, Neil!
You must log in or register to reply here.