According to www.comicscontinuum.com The first volume of Mutant X episodes is coming from ADV films June 24.

ADV Films has provided The Continuum with a first look at for Mutant X: Season One, Disc 1, the first DVD volume of the syndicated television series Mutant X, set for a June 24 release.

Mutant X: Season One, Disc 1 includes the series' first two episodes: "The Shock of the New" and "I Scream the Body Electric."

In "The Shock of the New, " a top-secret human genetics program has gone awry, giving its unwitting human subjects, including Brennan and Emma, incredible special powers. The Mutant X team, led by the calm and mysterious Adam, are on a mission to protect these mutants from those who would exploit their amazing abilities.

In "I Scream the Body Electric," the Genetic Security Agency, controlled by the maniacal Mason Eckhart, will stop at nothing to capture emerging mutants. Emma comes to acknowledge her own "elempathic power and joins the Mutant X team to save her friend Brennan. 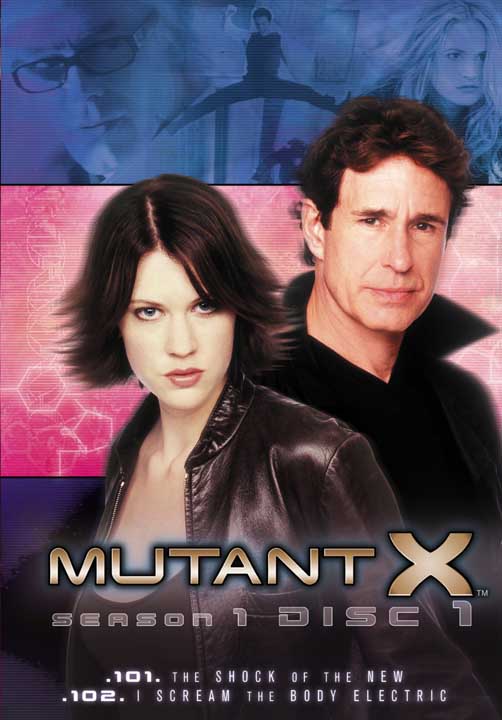 does anybody know why they are releasing the episodes separately instead of just making a "complete season 1" box set?

Becaus it's the same way ADV released Farscape and Andromeda. I'm guessing that, like those series, a box set will eventually get released as well. Just be patient.

I think ADV realized their mistake too late- that boxed sets are much more lucrative than individual releases.
Unfortunately they already released them individually before they lowered their MSRP across the board (except Farscape:frowning.

Andromeda box set is excellent for $40, and I'd definately go for a similarly priced Mutant-X box (hopefully lower) if the transfer is as good. Say what you want about ADV's series, they do some of the best DVD transfers in the business.

I am really annoyed at ADV. I have been purchasing the Andromeda, Farscape and Mutant X dvd's. And now they release seasons sets and a much lower price. They should have offered something for those who bought the individual discs early.

Todd I agree . I started buying these as they said no season box sets would be available . Now they release them as season sets and then cut the prices almost in half

capt
You must log in or register to reply here.