Warner Archive continues to add to its catalog of impressive Blu-ray titles with the release of the classic film noir Murder, My Sweet. 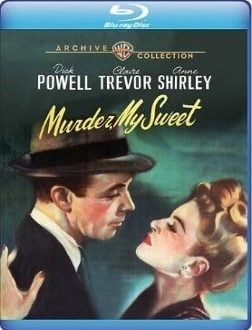 When Raymond Chandler wrote "Farewell, My Lovely," the novel upon which Murder, My Sweet is based, he described Moose Malloy thusly: "He looked about as inconspicuous as a tarantula on a slice of angel food." One could say the same about Mike Mazurki, who plays Malloy in the film. The story is told in flashback, as blindfolded private investigator Philip Marlowe (Dick Powell) is being interrogated by the police. He describes Malloy silently entering his office one evening. Marlowe is sitting there alone, his office illuminated only by a flashing neon sign across the street, when he gazes at the window and sees Malloy's hulking reflection in the glass.

In a surprisingly soft, gentle voice Malloy tells Marlowe "I'd like you to look for somebody. I looked for her where she worked. But I've been out of touch." Marlowe tells him to come back tomorrow, but Malloy tosses two twenty-dollar bills on the desk, saying "I'd like to show you where she worked." Marlowe then accompanies Malloy to a run-down joint called Florian's. "She was cute as lace pants," says Malloy. "A redhead. Eight years since I seen her. Six she didn't write. But she'll have a reason." They walk up the stairs to the bar, where Malloy begins to question the obviously frightened bartender about the whereabouts of his girl, Velma. This being Malloy's second visit to ask questions about Velma, the owner comes over and puts his hand on the big man's shoulder. "Look, Joe," he says. "I'm sorry about your girl, and I know how you feel. But she ain't here. No girl's been here since I owned this place." Malloy spots a young woman sitting at the bar and goes over to speak with her. When the owner tries to intervene, Mallow picks him up and throws him across the room. Moose Malloy is not someone to trifle with.

Marlowe agrees to search for Velma and he pays a visit to Mrs. Florian, the widow of the man who owned the place when Velma worked there. Marlowe plies her with liquor, but she denies having any memory of Velma. She then goes into her bedroom to pull out a file of photos of the women who worked at Florian's, but Marlowe notices that she removes one photo. He retrieves it against Mrs. Florian's will, and he sees that it was signed by Velma. Mrs. Florian refuses to say why she tried to hide the photo. Marlowe then leaves, but he looks back through the door window and sees Mrs. Florian, who had appeared to be drunk, on the telephone having what appears to be a coherent conversation.

The plot then takes a sharp turn when Marlowe is visited by Lindsay Marriott (Douglas Walton). Marriott tells Marlowe that he is meeting some men at a secluded spot at midnight to buy back stolen jewels for a friend, and he wants Marlowe to come along. He offers the private dick a hundred dollars for a few hours of work, and Marlowe accepts. They drive out to the area where the payoff is to take place, and Marlowe gets out of the car to look around. Finding no one there, he returns to the car but is knocked unconcious by a blackjack from behind. When he wakes up he discovers the dead body of Marriott in the front seat of the car.

Marlowe is questioned by the police, but they conclude that they have nothing on which to book him. However, one of the detectives cryptically warns Marlowe to stay away from someone named Jules Amthor (Otto Kruger). Marlowe has never heard of Amthor, and the warning only serves to make him want to see the man. Returning to his office, Marlowe is greeted by Ann Grayle (Anne Shirley), who initially poses as a newspaper reporter and asks Marlowe if Marriott told him who owned "the jade" which he was buying back. Marlowe suspects that the reporter is an imposter, so he dumps out her purse and discovers her true identity. It turns out that she is the daughter of a wealthy elderly man who has married a young woman named Helen (Claire Trevor), and he is the owner of the jade which was supposed to have been recovered by Marriott. When Marlowe goes to visit Ann's father and stepmother, he is left alone with Helen Grayle and she brazenly flirts when him. Marlowe learns that the Grayles know the mysterious Jules Amthor, and the plot thickens. In the meantime, Moose Mallow is still pressing Marlowe to find Velma.

Murder, My Sweet is a complex film noir and one of the finer examples of the genre. Dick Powell, who had previously appeared primarily in musicals, is superb as the hard-boiled Marlowe, a role which completely changed the focus of his acting career. Claire Trevor, who was dubbed "The Queen of Film Noir," is wonderful as the duplicitious Mrs. Grayle. Anne Shirley is excellent as the loving daughter who is contemptuous of her stepmother, and Mike Mazurki does what he always does in his film appearances. Murder, My Sweet is directed with aplomb by the prolific Edward Dmytryk, and the moody, evocative cinematography by Harry J. Wild is something to behold.

Any aficionado of film noir will want to add this outstanding Blu-ray to his or her film library.

This luminous black and white transfer is delivered in 1080p via the AVC codec. The film is properly framed at 1.37:1 and is simply stunning. Cinematographer Harry J. Wild worked with Orson Welles on Citizen Kane and The Magnificent Ambersons, and the influence is apparent when you see Wild's use of shadows, light, and unusual camera angles. Inky blacks, excellent shadow detail, natural grain structure, and outstanding detail all combine to make this one of the best-looking catalog releases of the year.

But don't take my word for it. Read the praise for this release from our resident expert, the estimable Robert A. Harris:

The English 2.0 DTS-HD MA audio is excellent, with clarity and strength that is impressive for a film which is 70 years old. There is a bit of age-related hiss which can be heard in the quieter scenes, but I forgot all about it once I got into the film. My impression is that Warner decided against tampering with the soundtrack, preferring to retain its full dynamic ranger rather than trying to eliminate all of the hiss. There is no crackling, popping, or distortion to interfere with your viewing pleasure.

The extras on the Blu-ray disc include the somewhat ragged original theatrical trailer, which gives you a good idea of what the film would have looked like without the tender care it has been given, and a commentary track by Alain Silver, co-author of such books as "Film Noir: The Encyclopedia" and "Film Noir Reader." He provides many interesting insights into the film. One point which I had not thought about is that surprisingly few film noir titles involved private detectives such as Philip Marlowe.

Murder, My Sweet is a truly classic film noir, and this outstanding Blu-ray from the Warner Archive more than does it justice. Watch it once for the story and performances, and then watch it again to savor its cinematic stylings. It can be ordered directly from the WB Shop.