One of the most authentic southern fried melodramas in many decades, Jeff Nichols’ Mud feels right from the very beginning and never makes a false step throughout its lengthy two-plus hour running time. With pitch perfect performances from a large cast and a story that ties together three rocky romantic relationships with a coming of age story that will linger long after the film ends, Mud is unquestionably one of the year’s best pictures. 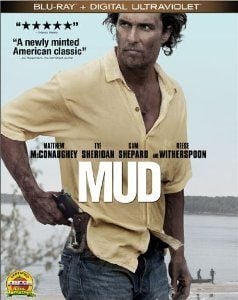 Youthful Arkansas river buddies Ellis (Tye Sheridan) and Neckbone (Jacob Lofland) come across fugitive Mud (Matthew McConaughey) hiding out on a remote island in the Mississippi and begin helping him as best they can. He’s shot and killed a man who was mistreating his longtime girl friend Juniper (Reese Witherspoon), and he’s come to the area to take her away with him. But he’s being hunted by the dead man’s wealthy relatives who have put a rich bounty on Mud’s head causing the web of discovery to continually be drawn tighter around him. Ellis in particular is drawn into the world of Mud’s romantic woes because his own parents (Ray McKinnon, Sarah Paulson) have hit a rocky patch and are on the verge of separation, and Ellis has fallen hard for pretty May Pearl (Bonnie Sturdivant), but she’s running hot and cold with him, and he’s at a total loss in understanding girls. With lots of problems on his mind, Ellis finds himself on an emotional roller coaster as the time for Mud’s departure approaches.Director Jeff Nichols’ script and direction are beautiful pieces of work capturing the look and feel of the modern day Mississippi River life as well as any film ever has and delving into matters of the human heart and its effect on youthful naiveté with notable brilliance. Ellis’ father tells him that “You can’t trust love,” and the film certainly bares out that homily (one of many that get mentioned during the course of the film) as the film’s three central male-female couplings all take rocky twists and turns. On the other hand, there are other facets of love that are as strong and true as can be including the deep friendships and long term platonic relationships that eventually turn out to be salvations for more than one character. With the Arkansas area of the Mississippi River as the setting for this unusual tale, the film doesn’t sound or look like anything else in recent memory, and director Nichols has captured the cadences of the area to perfection. If the script is a little too pat in places and some plot turns are a little telegraphed (a snake pit focused on in a couple of shots early on plays a major part later, a convenient sniper is present right when he’s needed), the film is so involving and eventually so exciting (the climactic face-off between the vengeful family with Mud), any small lapses are certainly easily overlooked.Tye Sheridan and Jacob Lofland are exceptional child actors, completely unselfconscious before the camera and playing the regular youthful teenagers that they both are with naturalness and great appeal. Matthew McConaughey hits another career high spot as the desperate and yet genial Mud, and Sam Shepard as his friend Tom Blankenship is likewise operating on all cylinders. Reese Witherspoon plays the object of Mud’s affections as a Miss Right Now as opposed to a Miss Right, and her enigmatic feelings toward the title character never quite get the expected payoff. Ray McKinnon as Ellis’ firm but loving father is wonderfully engaging, and Sarah Paulson, with less screen time as Ellis' mother, manages to make a case for her character’s feelings. Also excellent are Michael Shannon as Neck’s guardian and Paul Sparks and Joe Don Baker as the family out to get Mud.

The film has been framed at its theatrical 2.35:1 aspect ratio and is presented in a 1080p transfer using the AVC codec. Sharpness is very good throughout with lots of detail present, and color is rich and consistently presented with accurate flesh tones. Black levels at their best are quite good but occasionally are a bit lighter than at other times. The film has been divided into 16 chapters.

The DTS-HD Master Audio 5.1 sound mix doesn’t quite make the most of its surround opportunities. The music by David Wingo gets a reasonably good spread through the fronts with some echoes in the rears, but sound effects don’t make much of an impact except in the front soundstage, and with the richness of nature all around, one does expect it would have been a busier, more immersive mix. Dialogue has been well recorded, however, and appears firmly rooted in the center channel.

Audio Commentary: writer-director Jeff Nichols reminisces about the conception, planning, and shooting of the film from ideas he’d been forming for a long time. There are plenty of silent patches, but it’s a worthwhile listen for fans of the film.A Very Personal Tale (11:37, HD): director-writer Jeff Nichols, producers Sarah Green, Aaron Ryder and Lisa Maria Falcone, and cast members Tye Sheridan, Jacob Lofland, Matthew McConaughey, Sam Shepard, and Reece Witherspoon comment on the story and the director’s approach to the very personal material.The Arkansas Ensemble (7:11, HD): director Jeff Nichols talks about his casting choices (three of whom were first choices with their parts written with them in mind), and the principal cast comment on their roles.Southern Authenticity (6:14, HD): Jeff Nichols speaks on the importance of the story being shot on location in Arkansas to give it the feeling of truth.The Snake Pit (1:30, HD): behind-the-scenes look at the preparations for the snake pit sequence with Tye Sheridan being covered with hundreds of snakes.Promo Trailers (HD): Emperor, The Lincoln Lawyer, Winter’s Bone, Ring of Fire.Ultraviolet: code sheet is enclosed.

Mud is one of the year’s best dramas springing from a place of personal truth on the part of the writer-director and marvelously involving the audience in its engrossing story for over two hours. Highly recommended!

I didn't realize the film was that long so I'll probably place this one on my weekend viewing list. It sounds like an early Saturday morning viewing for me in about four days.

I eagerly await your comments on this film.

Matt, I knew you would love MUD.

I normally wait for a movie to hit one of the premium channels (HBO, etc) or Netflix but I'm going to buy this one for some of the special features. I grew up in the area of Arkansas where this was filmed. Most of the "city" scenes were filmed in Dumas, AR and the island is just outside of Eudora, AR. My hometown is right in the middle of those.

A very fine film, one I'm going to revisit with the audio commentary.

My wife commented that the writing was especially crisp. Not a wrong note in the dialogue. Combine a good script with some good performances and it usually adds up to a winner.

What a shame that more people don't know about this film.
You must log in or register to reply here.