I checked the message posting archives and this particular vintage tv property didn't receive much in the way of mileage in this discussion forum.

Is the Timeless Media Group MR. LUCKY THE COMPLETE SERIES 4-disc set worth getting?

Some reviewers-consumers say the source elements are very good while others insist they're terrible.

Obviously it can't be both.

Any reliable and certain opinions on it here to be shared?

Some episodes are fine, some are fairly poor as I recall--sadly not cleanly remastered like Peter Gunn. However, it's a pretty good series, and is also pretty inexpensive. We're also unlikely to get a better version (and you get a free Mr. Lucky soundtrack CD)..

Thank you. It's a really wildly offbeat show with a great opening title. I was hoping for the best.

The episodes don't look great, but they are passable. But it's a lot of fun to watch so I'd say it's a more than acceptable trade-off. I bought it primarily because I love anything Ross Martin does and have been very pleased with it.

MR. LUCKY (CBS 1959-60) rated quite well (21 of the top 25 tv shows) it's first season but (apparently) lost its sponsor and a replacement wasn't found forcing its premature cancellation.

I remember seeing John Vivyan in an episode of THE ADVENTURES OF SUPERMAN (Syndicated 1952-57, ABC 1957-58) titled "The Gentle Monster" (24/03/1958) in which he played a mob boss appropriately named "Duke" and he was quite funny. I really enjoyed it!

It seems that the series underwent a format change mid-season transforming Mr. Lucky's base-of-operations from a floating gambling casino to a floating restaurant just to please its sponsor.

Oh brother! How dumb can one get?! Gambling was this show's mistique and attraction. Paladin (Richard Boone) was always gambling on tv and nobody seemed to mind that.

Thanks to everyone for your (helpful) responses.

Otherwise, I found the entire series to be quite watchable, with some episodes better than others. The show includes enough original Henry Mancini music to account for two albums, "Mr. Lucky" and "Mr. Lucky Goes Latin." 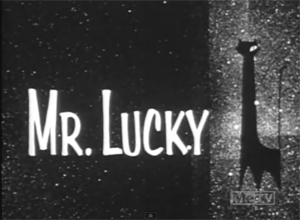 I'm sold on the tv series but the (disappointing) quality of the video transfers in this particular DVD release is the discouragement. I well knew (or at least suspected) from the inexpensive price that it was likely not the best quality.

Maybe someone will attempt a better issue. It warrants it.

Once again thank you my friends for your (appreciated) responses and most interesting discussion.