Sherlock Holmes is probably the most cinematically active character in the history of movies, but why no one has ever thought to portray the man at the end of his remarkable life is a mystery worthy of the great man himself. That lapse has been rectified with Bill Condon’s Mr. Holmes, a lovely meditation on the aged detective struggling to maintain his mental agility against his greatest adversary: old age. Featuring illuminating performances and a beautiful production, the movie only comes up a bit short by not providing Holmes with a case worthy of his final efforts. 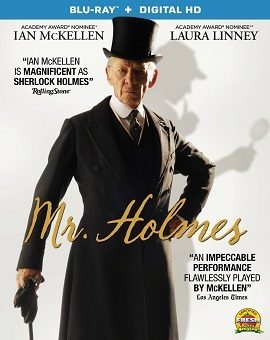 True to his always stated intentions, Sherlock Holmes (Ian McKellen) has spent the past thirty-five years of retirement tending to his bees in Sussex, but he has been haunted all these years by his final unsuccessful case and now nearly at the end of his life at age 93, he’s eager to put a final cap to it. The problem is his age is proving a burden as he attempts to reconstruct the minutia of the case. He’s just returned from Japan hoping that some prickly ash he’s retrieved there will bring back his mental acuity. He’s also spurred on by the idolizing of the young son Roger (Milo Parker) of his present housekeeper Mrs. Munro (Laura Linney). It seems to be a race against time to see if Holmes can put the case down on paper before he loses memory of it entirely.

Jeffrey Hatcher’s screenplay based on the novel A Slight Trick of the Mind by Mitch Cullin utilizes multiple flashback scenarios which jump us back and forth from late 1940s Sussex to London right after World War I when the case of the mysterious housewife (Hattie Morahan) has Holmes trailing the woman at the behest of her distraught husband (Patrick Kennedy) mixed in with more recent flashbacks which involve Holmes’ time in Japan meeting with Tamiki Umezaki (Hiroyuki Sanada) who is helping him find the ash he hopes will sharpen his memory but who also has ulterior motives for wanting to meet the famous detective. All of the plot strands do eventually coalesce though mystery aficionados may be the slightest bit let down that the eventual solution to Holmes’ final case pieced together throughout the movie’s running time isn’t more of a puzzler. On the other hand, there are more than a few compensations for the less-than-scintillating mystery we’re following: Watson (whom we see only in brief, out-of-focus glances), of course, had written up the last case as another successful outing for the great sleuth, and at one point, Holmes visits a local cinema to see the movie version of the story which, naturally, appalls him utterly (clever touch: Holmes in the movie is played by Nicholas Rowe who played the juvenile Holmes in Barry Levinson’s Young Sherlock Holmes three decades ago). During one of the Japan flashbacks, Holmes and Umezaki go to a burned up garden in Hiroshima to find the ash he’s searching for (the setting is post World War II): it’s a haunting, somewhat mortifying sight to see the blackened rubble aftermath of that first atomic blast. And all of the scenes with Holmes and the adoring Roger are a tonic as he spurs the detective on with challenges to his deductive abilities, his insatiable curiosity about the final case, and his growing interest in beekeeping. Director Bill Condon does a superlatively steady job guiding the different periods of the storytelling making some witty visual gags contrasting the real Sherlock Holmes with the literary version invented by John Watson and staging some marvelous scenes that make the most of both city and country settings for the widescreen camerawork.

Ian McKellen is a sensational Holmes, clearly a man with mental deftness but who’s just on the brink of falling victim to dementia, and offering both a view of old age and of the great detective that have been rarely portrayed in cinema. Laura Linney is equally astute as the devoted housekeeper frightened that the future for herself and her child doesn’t look so rosy once the great man passes away. Milo Parker does terrific work as the inquisitive Roger, never enough to be irritating but rather ingratiating and always eager to please. (A melodramatic plot event in the film’s second half adds a bit of drama but seems somewhat ill-conceived though it does allow Holmes to make one final great deduction.) Patrick Kennedy and Hattie Morahan are fine as the aggrieved couple at the center of the mystery with Frances de la Tour getting to steal a scene or two as a music teacher who is involved in the investigation. Hiroyuki Sanada is excellent as the Japanese businessman with his own personal agenda. One does wish more could have been done with John Sessions as Sherlock’s brother Mycroft.

Filmed digitally with the Arri Alexa, the movie’s theatrical 2.35:1 aspect ratio is faithfully rendered in 1080p resolution using the AVC codec. Sharpness is dazzling throughout with special kudos to the make-up crew for aging Holmes some thirty-five years for the various timelines of the movie complete with facial liver spots which are detailed and very realistic. Color is nicely saturated and visually rewarding with life-like skin tones. Contrast has been beautifully sustained while black levels are rich and inky. The film has been divided into 16 chapters.

The DTS-HD Master Audio 5.1 sound mix offers an outstanding aural presentation of this moderately budgeted movie. The haunting, often mournful music score by Carter Burwell gets an excellent spread through the fronts and rears, and atmospheric effects get the split surround treatment when warranted though they are fairly infrequent. Dialogue has been beautifully recorded and has been placed in the center channel.

Holmes: The Icon (2:21, HD): a very brief production vignette featuring short soundbites about the title character and how he varies in this treatment from director Bill Condon, writer Jeffrey Hatcher, producer Anne Carey, and stars Ian McKellen and Laura Linney.

Promo Trailers (HD): Love & Mercy, Z for Zachariah, The End of the Tour, Some Kind of Beautiful.

An engaging mystery-drama concerning an aged detective trying mightily to rectify a mishandled final case, Mr. Holmes despite a few niggling flaws still manages to enchant with superb performances and an evocative period reconstruction that draws the viewer into the action. Recommended!

I meant to see in the theater and timing for me was just off. I hate to say the lack of bonus content (You're 2 of 5 stars seems right to me.) means I will rent this and see if I love it enough to purchase.

Mark Walker said:
I meant to see in the theater and timing for me was just off. I hate to say the lack of bonus content (You're 2 of 5 stars seems right to me.) means I will rent this and see if I love it enough to purchase.
Click to expand...

Yes, the lack of real bonus material was a definite disappointment. Would love to have heard Ian talk about the character of Holmes as he grew up with it before taking it on in the film.

I took my kids (9 and 13) to see this last summer (we were the only people under 70 in the audience at a matinee and I'm sure they all thought I was evil for bring my kids there, at least at first). I wanted my kids to have something other than the usual summer fare and we all very much enjoyed this film. It will definitely be added to the collection. McKellen is so good as Holmes, my one regret is we never got to see him play Holmes while at the height of his powers. Still, a very enjoyable movie and one I will re-visit often for the performances.

PaulDA said:
McKellen is so good as Holmes, my one regret is we never got to see him play Holmes while at the height of his powers. Still, a very enjoyable movie and one I will re-visit often for the performances.
Click to expand...

I thought the same thing as I finished watching the film. We missed a chance for a great Sherlock Holmes thirty years ago. I am very grateful to have a great elderly Holmes, of course.

Matt Hough said:
Yes, the lack of real bonus material was a definite disappointment. Would love to have heard Ian talk about the character of Holmes as he grew up with it before taking it on in the film.
Click to expand...

I finally got around to watching this film last night after a friend had asked me about it several days ago.


What a wonderful film. While I would love a commentary track from McKellan, Linney, and Condon, the film is one I know I will enjoy with repeat viewings, making it a no-brainer to purchase.


Bill Condon has redeemed himself after (what seemed to me to be him) earning a big paycheck (and assuaging the concerns that Twilight writer Stephanie Meyer was anti-gay), with his direction of the last two Twilight films, which are four hours I wish I could get back.