I think I'm avoiding theaters entirely until there's either a vaccine or cases are down to almost zero.
Reactions: Mike2001 and Robert Crawford

Sean Bryan said:
I was looking at the Cinemark info, and it said they would block out seats next to parties. Like it you go with a significant other or household member you’d be sitting right next to each other and the seats on each side would be blocked. But what about if you wanted to go with your friend? I’d still want at least a seat between us. Would I have to purchase 3 seats? Of course they couldn’t sit anyone in between you, but will they allow you to purchase two seats that aren’t next to each other? It doesn’t make sense it not, but they weren’t clear on that.

I‘m not likely to risk a theater this summer, especially since people won’t be wearing masks, but I’d still like to better understand how that is supposed to work. Anyone aware of more specifics on how the seating is supposed to work at Cinemark?
Click to expand...

My guess is that you'll basically be buying multiple seats so you and your buddy can decide how you want to space yourselves among the total number of seats you have. If not, I guess you could make separate purchases with seats next to each other and that would give you spacing between the two people.

Who is Adam Aron? And what is his position on the issue? 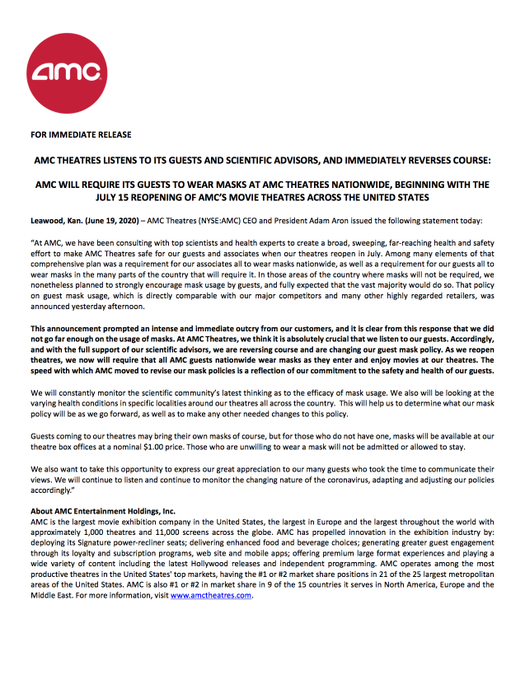 I'm glad to see that they listened to the people who said "What are you guys? Dumb or something?" and did the right thing.
Reactions: ManW_TheUncool, Sean Bryan, Tino and 1 other person

AMC has changed their policy. Mask will be required when theaters open.

I don't see how they can enforce it without hiring professional security people at each theater. Theater staff are going to be in constant conflict with a handful of patrons, and potentially be put into dangerous situations on a regular basis.
Reactions: Sean Bryan

Robert Crawford said:
Do we need a separate thread when we’re already discussing this topic in two other threads?
Click to expand...

Could you just merge this one with the sticky pandemic thread?

Jake Lipson said:
Could you just merge this one with the sticky pandemic thread?
Click to expand...

TravisR said:
My guess is that you'll basically be buying multiple seats so you and your buddy can decide how you want to space yourselves among the total number of seats you have. If not, I guess you could make separate purchases with seats next to each other and that would give you spacing between the two people.
Click to expand...

They have significantly reduced ticket prices and said concessions would be discounted as well, so buying extra seats isn’t too rough I suppose. I don’t think I’ll risk it anytime soon, but I also like to know my options.

Here’s hoping over the next few months that we continue to hear of things like the recent report that treatment with dexamethasone decreases the fatality rate by about a third. There are multiple therapeutics undergoing trials that should hopefully have good data over the next few months. Summer isn’t looking that safe to me, but I’m hoping that by Fall there may be a few more “remdesivirs“ and “dexamethasones“ so that, when COMBINED with behavioral risk mitigation (masks and physical distancing) the risk for doing something like attending a movie indoors might be more acceptable.
Reactions: ManW_TheUncool and Tino

After the push back against AMC and its reversal on mask wearing,now Regal will require a mask be worn in a movie theater.

EXCLUSIVE: We have just received word that No. 2 film exhibitor Regal Cinemas is requiring all patrons to wear face masks. In an updated policy made public Friday on the chain’s website, &#82…

Garysb said:
After the push back against AMC and its reversal on mask wearing,now Regal will require a mask be worn in a movie theater.

EXCLUSIVE: We have just received word that No. 2 film exhibitor Regal Cinemas is requiring all patrons to wear face masks. In an updated policy made public Friday on the chain’s website, &#82…

What the theaters should do is give patrons the option to leave and get a refund if they spot people in their auditorium not wearing a mask. I would never confront someone not wearing a mask nor would I expect an usher to do so. Its too dangerous.
Last edited: Jun 20, 2020
Reactions: Sam Favate and ManW_TheUncool

Garysb said:
What the theaters should do is give patrons the option to leave and get a refund if they spot people in their auditorium not wearing a mask.
Click to expand...

I have to imagine that you'd be able to get a refund. Even if it's not official policy, I'm sure the people working there would rather refund you the money rather than risk starting a problem with an idiot who might be a potential maniac.

Officials also reported 18 deaths in the past 24 hours, which is seven more than Sunday. The Public Health department has identified 85,942 positive cases of COVID-19 across all areas of L.A. County, and a total of 3,137 deaths.

“Today marks the third day in a week that we have reported 2,000 or more cases of COVID-19,” said Dr. Barbara Ferrer, the county’s director of public health. “And while some of the increases are due to test reporting issues, it is clear that much of the increase represents more community transmission.”
Click to expand...

More at the link:

Los Angeles County health officials said today that the region saw a record 2,571 new cases of coronavirus on Monday — which is more than 20% higher the previous daily mark set last week. Off…

I bring up Deadline's coverage of this specifically, rather than a more generalized news organization, specifically because their main focus is entertainment news, and they're running this alongside recent stories from the last couple weeks about theaters readying to reopen for Mulan and Tenet.

Those two things do not feel like they go together. I mean, it's fine for Deadline to cover the virus, but it doesn't feel like there should be conversations happening about theaters reopening while virus cases are continuing to rise to record levels. Los Angeles is, as we know, traditionally one of the biggest moviegoing markets in the country. I don't see how Mulan or Tenet can keep their dates with things continuing as they are.

Due to posting incidents in other threads in which people have ignored Moderator warnings. The following is to remind the membership to refrain from political references of any kind, no matter the thread or forum area:

The next person that makes a political reference in this thread will be banned from it. Just because you're upset with how this pandemic is being handled doesn't mean you can disregard our posting guidelines regarding no-political talk.

Edit: Furthermore, Ownership and the Moderator Staff are concerned with the number of vitriolic posts in this thread. That needs to stop, otherwise, we will have no choice, but to close this thread down. Going forward such posts will be deleted and those that post them will be subject to being banned from this thread. We can't allow such emotional and personal comments to become the norm in our community.

There will not be any further warnings!
Reactions: Jake Lipson

One of my local Cinemark theaters -- not my immediate closest one, but another one that is slightly out of the way -- is still planning to reopen on Friday. They are already selling advance tickets.

Obviously, there's no way I would go to anything at this point. Cases are still surging here at an alarming rate. However, I got curious and started clicking around the seating charts on their website just to see what is selling and what they're doing with capacity limits.

I looked at The Matrix, Wonder Woman and Back to the Future. Matrix and Wonder Woman have four seats sold so far for each of their first matinee screenings; Back to the Future has sold six. Because these are "comeback classics" and not first-run new films, ticket prices are $5 each. When someone chooses to buy tickets, they can buy seats next to each other for members of a single party. After a purchase is made, the system automatically blocks out four seats on either side of the party's seats, for a total of 8 seats blocked out surrounding each party. The blocked out seats are referred to on the seating map as "Safer Seat Spacing," and are greyed out with an X over them. Seats that people actually bought and will be occupying are greyed out with no X and are called "Unavailable."

All this means that currently the theater has been paid a total of $20 for the screenings I looked at, or $30 for BTTF, unless some of the tickets are for children. In that case, their price would be $3.

Putting aside the obvious health risks of going to a movie right now at all, I don't see how it is financially viable to open at this level of attendance. There's no way they will actually be making any money when sales are that low and tickets are that inexpensive. It will cost more to run the theater than they will bring in in ticket sales. Obviously, they're hoping that people will buy concessions too, which is what their model is built on even when we're not in a pandemic. But even if each of those people per screening bought a giant popcorn tub and large drink (which is a big assumption), I'm still struggling to see how the math would work to have the theater come out ahead on these screenings. Plus, concessions are being heavily discounted over what they normally would be, too.

Probably a mixture of wishful thinking along with accounting/tax law calculations. It may be a matter where if they’re closed, they can’t claim much in losses, but if they open and make less money this weekend than they did last year at the same time, then use that disparity to take a tax write off on the difference.
You must log in or register to reply here.
Share:
Facebook Twitter Reddit Pinterest Tumblr WhatsApp Email Link