A minor murder mystery with some high powered stars of their era and one which makes an efficient use of the 20th Century Fox backlot, Gregory Ratoff’s Moss Rose captures some of the atmospheric spell of Victorian England while failing fairly strongly to make a star of its top-billed player. There are quite a few famous names in the cast, and the movie has its pleasures, but for the leading lady, this film must have been a somewhat bitter consolation prize after having the leading role in Forever Amber taken away. 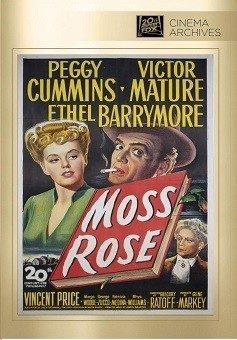 London chorus girl Belle Adair (Peggy Cummins) sees a man leaving her friend Daisy Arrow’s (Margo Woode) room late at night before she discovers that her friend has been murdered. Through some amateur sleuthing of her own, she learns that the man is fabulously wealthy Michael Drego (Victor Mature) and intends to inform on him to the police despite his protestations of innocence to her when she hatches another scheme. If he’ll agree to treat her to a fortnight’s stay at his lavish country estate where she can learn the habits and manners of a lady (her lifelong dream), she’ll forget what she knows. He agrees and brings her to Charmley Manor where he meets Michael’s severe fiancé Audrey Ashton (Patricia Medina) and his warm, stately mother Lady Margaret (Ethel Barrymore). During her stay, she and Michael become very close and Belle (whose real name is Rose Lynton) realizes that he doesn’t really love Audrey and is going through with the marriage to please his mother. When another death occurs, however, Belle/Rose becomes keenly aware that her life is in danger from someone with decidedly malicious intent.

The script by Jules Furthman and Tom Reed from a novel by Joseph Shearing has a fair share of mystery and suspense (they pretty much bookend the movie with a long middle section that offers more light-hearted fare), but certain motivations and the use of a central key symbol (the moss rose of the title embedded in a Bible) aren’t made clear at all (to say more would spoil the mystery). Director Gregory Ratoff kind of loses focus in the film’s middle section as the mystery concerning the death of Daisy is abandoned as the movie concentrates on the growing attraction between Rose and Michael. And yet, there is some great atmosphere here. The sequence where Rose blackmails Michael for those two weeks in the country is held on a wonderfully foggy and sinister section of Waterloo Bridge making one swear he’s in England, and Rose’s tour of Michael’s childhood bedroom is quite eerily claustrophobic and off-kilter. The screenwriters don’t do as much with their detective characters (played by the ever-reliable Vincent Price and Rhys Williams) as one would expect in a mystery, and there aren’t enough red herring suspects to make the killer’s true identity the real shocker it’s meant to be.

Though originally from Wales, Peggy Cummins struggles mightily with her cockney accent with it going in and out sometimes to distraction. Otherwise, she’s full of spit and spunk as Belle/Rose, kicks a mean leg in her chorus girl scenes early on (though she certainly leaves her work for her two-week sojourn in the country with nary a problem), and looks smashing in the Victorian-era clothes René has provided. Victor Mature is a rather lackluster Michael with no discernible accent (explained away by his having spent his formative years in Canada), but Ethel Barrymore is elegance and class personified as his accommodating mother. Patricia Medina has a good moment or two as Michael’s jealous fiancé Audrey, and Margo Woode is likewise effective in the early scenes before her murder as Belle’s chorus girl chum. George Zucco makes for a splendidly sinister butler Claxton while Vincent Price and Rhys Williams play the detectives professionally but without much spark (likely due to indifferent writing).

The film’s original 1.37:1 theatrical aspect ratio is faithfully provided in this transfer. The grayscale is nicely achieved with mostly good contrast (a scene or two look to have come from an earlier generation master) and decent black levels along with fine white levels. Sharpness is quite good, and despite the age-related video artifacts, the transfer does have a very film-like look. But the amounts of speckles and debris are sometimes considerable (occurring more frequently near each of the reel change markers which are clearly in evidence), and there are a few noticeable scratches as well. The film has been divided into chapters every ten minutes so this disc contains 9 chapters.

The Dolby Digital 2.0 sound mix is decoded by Dolby Prologic into the center channel. While dialog, music, and sound effects have been woven together with a sure hand, the age-related problems with the soundtrack can’t be overlooked. There are frequent examples of scratchy distortion and crackle, pops which seem to occur near the reel change marker placements, and a couple of notable bumps as well as occasional light hiss.

With a considerable fan base from her noir classic Gun Crazy, Peggy Cummins fans may be a bit disappointed with her work in Moss Rose. She’s got lots of energy and enthusiasm that rise above her problems feigning a British cockney character, and the mystery itself while not exactly top notch is surrounded by some effective suspense and a good moody atmosphere that are not total disappointments.