Disney recently announced the premiere date for Monsters at Work. So I thought now is as good a time as any to start a thread for it. As its name implies, it is a spinoff series from Monsters, Inc. It is set after the events of the movie, once the Scare Floor becomes the Laugh Floor. The first episode will start streaming July 2 on Disney+.


TV Line said:
The streamer announced Wednesday that Monsters at Work will debut on Friday, July 2. According to the official logline, the sequel series picks up the day after the Monsters, Incorporated power plant started harvesting the laughter of children to fuel the city of Monstropolis, thanks to Mike and Sulley’s discovery that laughter generates 10 times more energy than screams. The series is told from the prospective of Tylor Tuskmon (Superstore‘s Ben Feldman), “an eager young monster who graduated top of his class at Monsters University and always dreamed of becoming a Scarer” — that is, until he lands a job at Monsters, Incorporated. There he discovers that “scaring is out and laughter is in.” 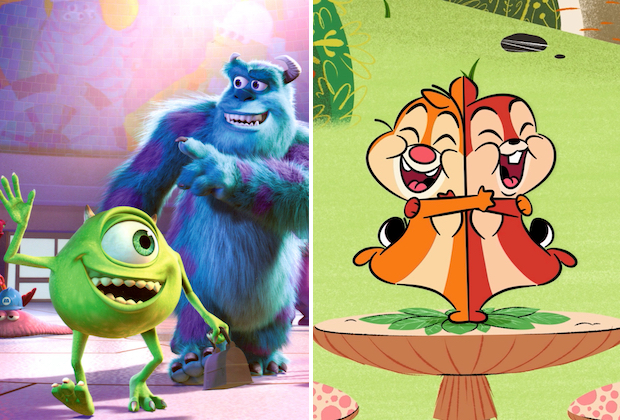 Monsters, Inc. fans will finally get the answer to a 20-year-old question when the Disney+ spinoff premieres this summer. The streamer announced Wednesday that Monsters at Work will debut on 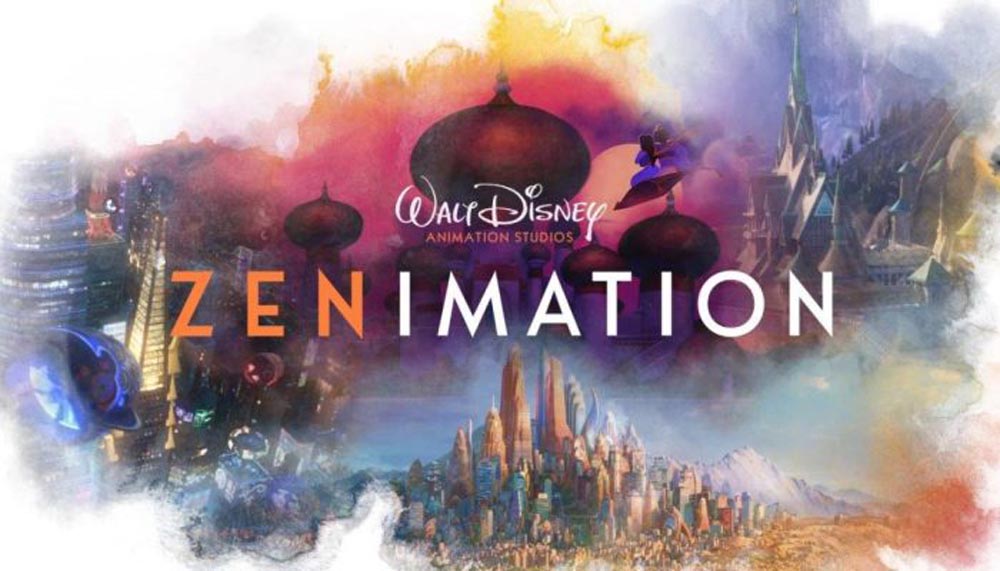 UPDATE: The Monsters at Work premiere date has been changed to Wednesday, July 7, and Disney+ has released a trailer — watch it below. PREVIOUSLY: Disney+ has ordered a second season of its a…

So it isn't actually being produced by Pixar proper. That feels a little weird, especially since Pixar just announced a bunch of things for Disney+ which they're going to be doing themselves, like Dug spinoff shorts from Up. I wonder how many people will even realize this has been outsourced to a different subdivision of Disney, since Monsters is well-known and associated with the Pixar brand. I'm not sure what to think about that but I'll probably still watch it. I hope it's good. At the very least the monster world is a fun one to spend time in.

IMDb also lists Kelly Marie Tran in the cast too playing a character named Val Little. She's been getting around a lot lately with a variety of voice work. She voiced Dawn Betterman in The Croods: A New Age and of course is one of the titular characters in Disney's Raya and the Last Dragon which is coming on Friday.

This seem like the year for Disney+'s original programming. There is going to be an abundance of stuff for every sort of fan. I think this show will get a lot of attention, especially if it has the charm of the movies (yes, Monsters University wasn't as good as the first film, but it was still pretty good).

I know this is a thread for the D+.Monsters spin off, but they coupled this with news of a Chip and Dale reboot. The C&D character redesigns look terrible.

I agree. I'm not nearly as interested in that. But to give them the benefit of the doubt, maybe they will look better in motion?

Jake Lipson said:
I agree. I'm not nearly as interested in that. But to give them the benefit of the doubt, maybe they will look better in motion?
Click to expand...

You have a point there. I won't totally write them off until we see them moving. I just found the designs off-putting because of my familiarity with what the characters looked like from their classic period. They were redesigned for the Rescue Rangers TV series, but still looked closely to the originals. These new designs are really pushing it.

Maybe motion will improve them though. The retro designs for the Mackey Mouse show worked pretty well when in motion. I must have watched the one where he was a taxi driver in India about a dozen times. The BGM for that episode was spot on. I really dug it and I'm not a big BGM person.

Check out "City of Ghosts" on Netflix if you get a chance. I know you are a big fan of animation and I'd like to hear your thoughts on it. I was fairly impressed with it, considering it is rated Y7. I'd like it to get more episodes, but Netflix is notorious for killing shows after one season, and I'm not sure how it will go over with kids because aspects of it feel like it is more relatable to an adult.

Edit: I started a thread on it, but I doubt it will get any responses.

Val Little, the character previously attributed to Kelly Marie Tran, will now be voiced by Mandy Kaling. It's not clear if the previous news of Tran voicing the role was inaccurate or if this is a recasting for whatever reason.

Edit: Here's an older Hollywood Reporter article which announces Kelly Marie Tran as Val Little. Therefore, I assume this was true at one point and Mandy Kaling is being brought in as a recasting. 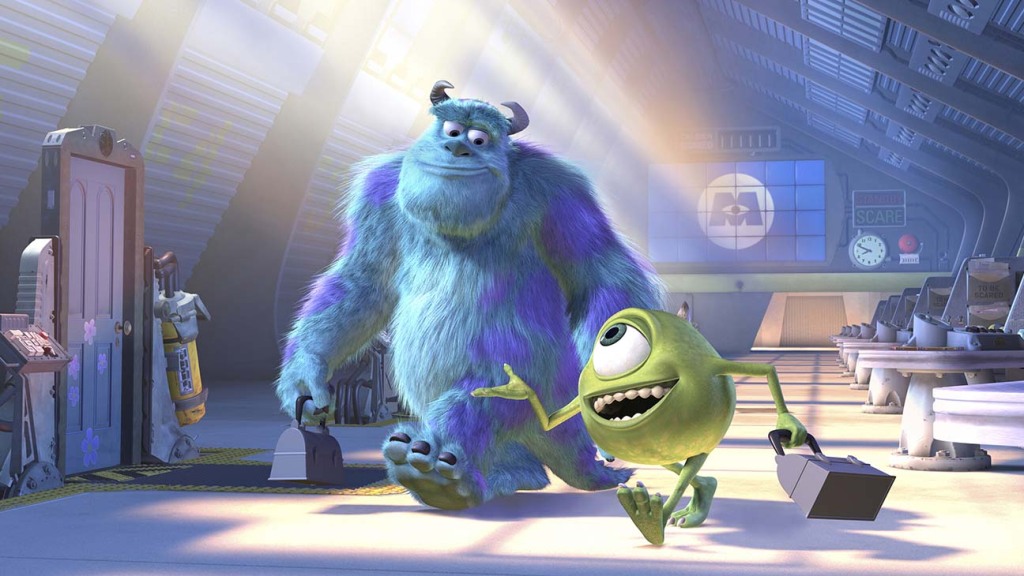 Disney+, the forthcoming streaming platform designed to rival Netflix, is getting the Monsters, Inc. gang back together — and inviting some new friends to the party. Monsters at Work, the upc…

Back to the actual new story. Besides Kaling joining the cast, Bonnie Hunt will be returning as the voice of Ms. Flint, who trained new recruits at Monsters, Inc. in the first movie. 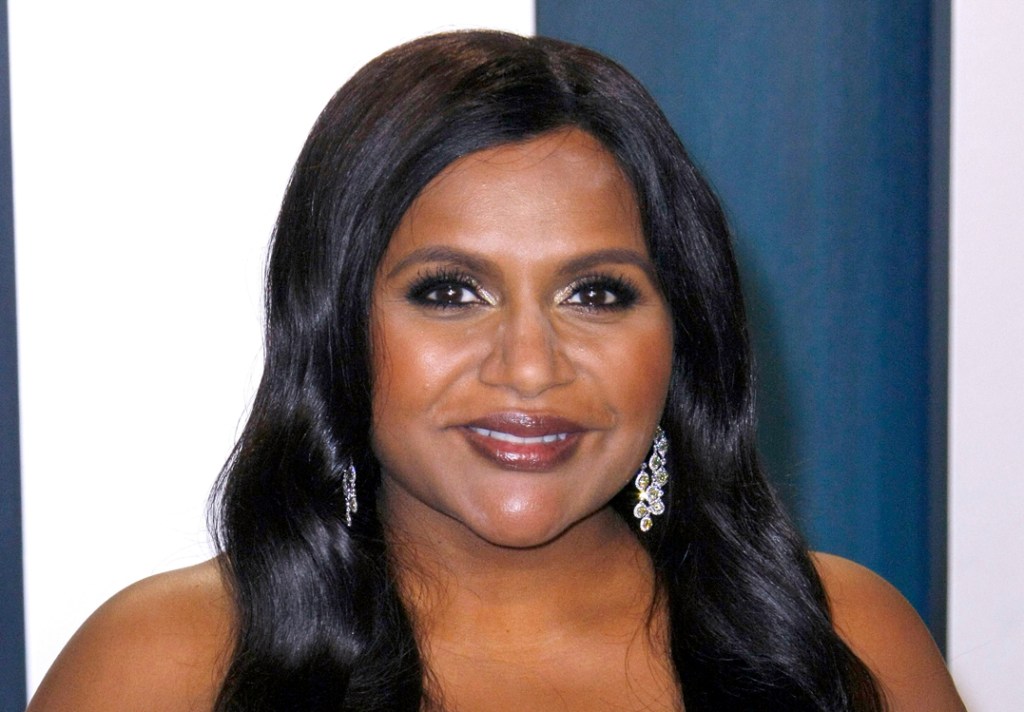 Disney+ social media unveiled some new character images. However, oddly enough, they didn't attach names to the new characters. Obviously we know who Mike and Sulley are, but it would be nice to have names to go with the rest of those featured here. Entertainment Weekly has an article with the same pictures as above, but they have character names: 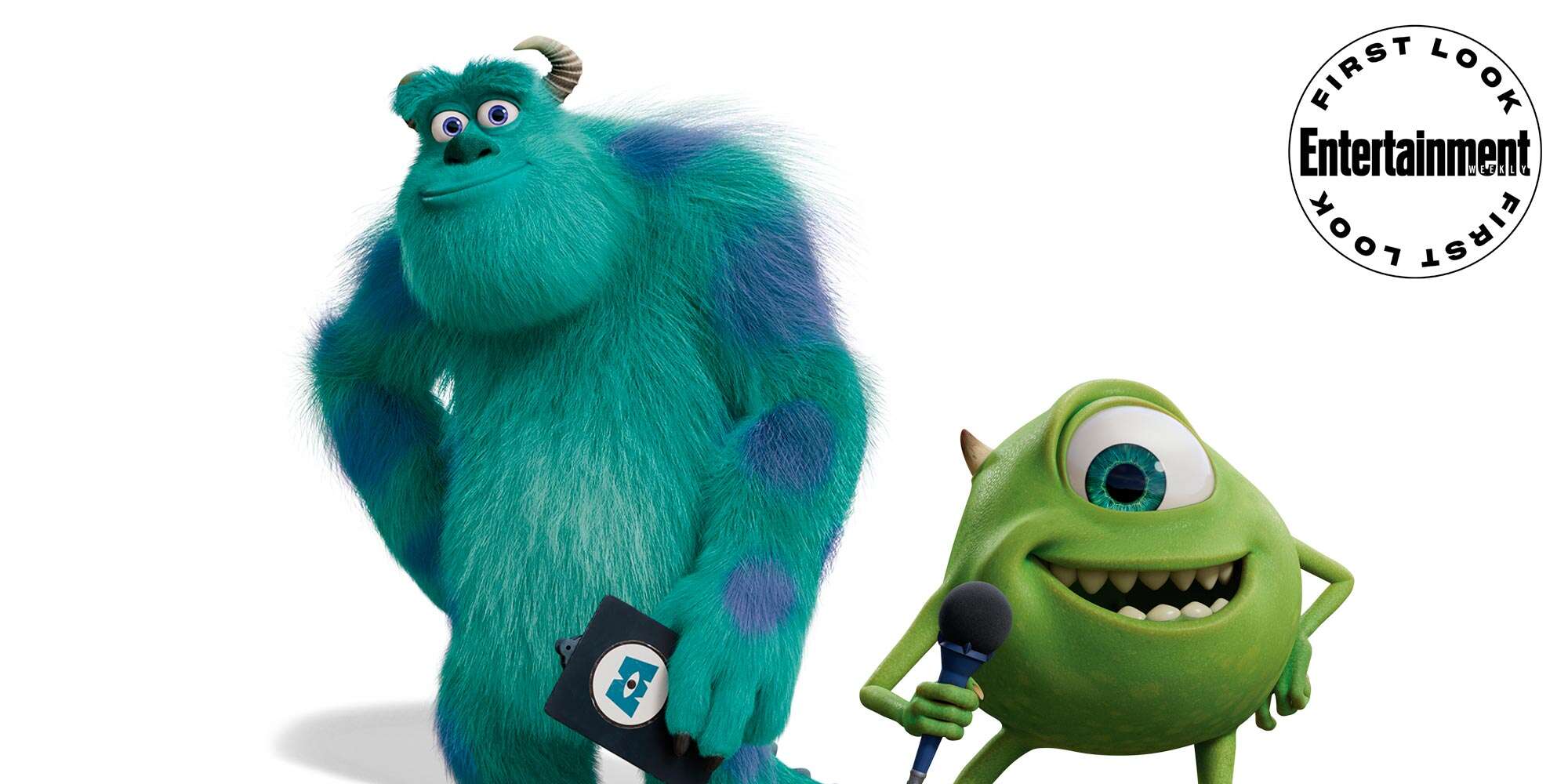 Meet Mike and Sulley's new co-workers, including characters played by Mindy Kaling and Bonnie Hunt, in this preview of the 'Monsters, Inc.' spin-off show.

ABC has been running some random Disney movies on Monday nights lately. I'm not usually interested in that because I don't like to watch movies on TV with commercials and potentially cropped, especially if It is something I own. However, I bring this up because Monsters, Inc. is the movie on Monday, May 17. Of course I own that on Blu-ray and would always choose to put in the disc to watch the film. But it occurred to me that we haven't yet seen a trailer or any footage at all from Monsters at Work even though it is supposed to debut on July 2.

It would make sense, promotionally speaking, to include a sneak peak of the series during the broadcast of the movie. I want to be very clear here that I don't have any insider information at all and I don't know what they are planning. It could very well just be that they're airing the movie to fill time and there is no connection whatsoever with the series. But July 2 is only 48 days away, so the marketing campaign for the show will have to start sooner rather than later if it is maintaining that previously announced date. So I set my DVR to pick up the movie just in case. I have no interest in actually watching the film in a television format, but I'll go through the recording after it airs and see if there's anything of interest promoting the show.

Give it to me right now!

I've been so busy recently that I didn't know this was happening so seeing this commercial on Instagram this morning was a very pleasant and welcome surprise.

Looks like a lot of fun. We'll be tuning in every week. I noticed just now that the new trailer indicates the series will be streaming July 7 rather than the previously announced July 2.

July 7 is a Wednesday.

This is kind of irritating because it means that for the first three weeks of this run, Monsters at Work will be dropping new episodes on the exact same day and time as Loki.

I like Loki being on Wednesdays because it spreads the Disney+ debuts throughout the week. Now, by picking Wednesday for this show as well, Disney has kind of defeated that purpose. Because I always stay up and watch at midnight, that means Tuesday night/Wednesday morning is going to be really long with the combination of both of these shows before I go to bed. I enjoy watching them as soon as possible (and in particular with the Marvel shows I don't want to risk getting spoiled online), but that's part of why I like having Loki on a different day so there isn't a pileup of multiple programs at once. Oh well.

These also confirm that there will be two episodes on premiere day, which is now July 7 since Disney+ shifted all of their series to Wednesdays. Billy Crystal was on Jimmy Kimmel Live recently to promote the show. In addition to the interview, this video also includes a new clip from the show I hadn't seen before.

Here is a short featurette with Dominic Lewis, who is the composer for the show. Randy Newman, who scored the Monsters films, is not involved with the show.

Variety has an interview with showrunner Bobs Gannaway and actor Ben Feldman. Feldman provides the voice of Tylor. 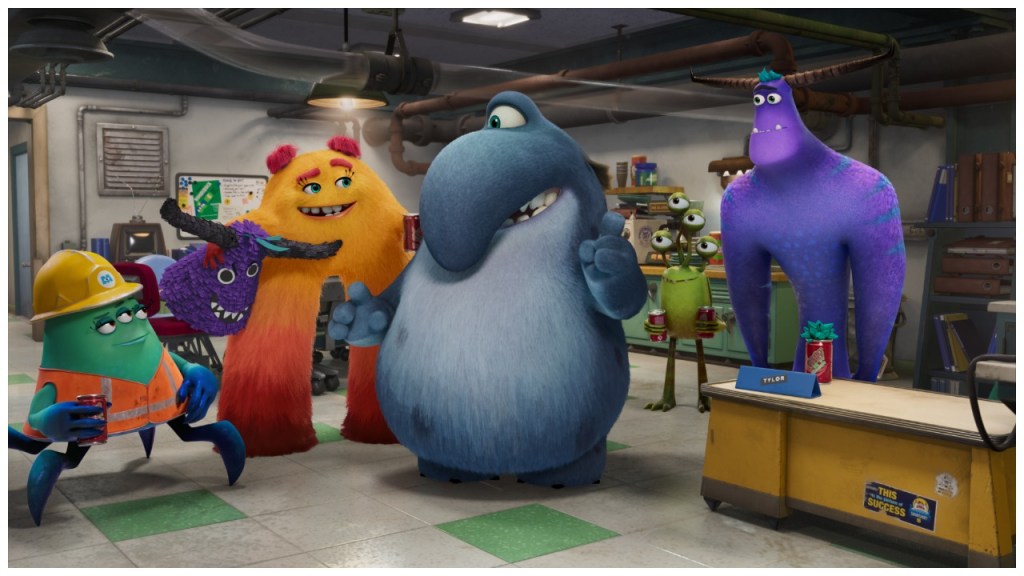 Two decades after the wonderfully zippy, goofy “Monsters, Inc.” was released in theaters, Pixar is bringing back Mike Wazowski and James P. “Sulley” Sullivan for another adventure. The upcoming tel…

First two episodes dropped today and I watched them with the kids today.

It picks up basically right at the end of Monsters Inc. and tells the "what happened next" story.
You must log in or register to reply here.

Disney+ Dug Days (from Up)