Six seasons into its run and the five-time Emmy winner for Best Comedy Series Modern Family has another hilariously entertaining season. Is it as good as the earlier seasons were? It’s debatable, and most prognosticators are not giving the show great odds of winning yet another Emmy for season six, but that said, there are no duds among this season’s episodes, and with the children growing older and their having different types of situations to propel stories much different from their younger years, the show is exploring new areas for comedy each year and doing a fine job with it. As for the adults, time has only enriched the multi-faceted relationships they enjoy (and provoke) among themselves. 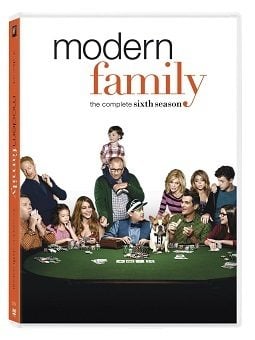 After all these years, the actors continue to play together like a well-oiled machine, and any combination of them together seems to work superbly so whether siblings Mitch (Jesse Tyler Ferguson) and Claire (Julie Bowen) and their significant others Cam (Eric Stonestreet) and Phil (Ty Burrell) are paired with the kids’ father Jay (Ed O’Neill) and his soon-to-be-a-citizen wife Gloria (Sofia Vergara) or the show’s very talented array of younger actors playing their various offspring: budding stylist Haley (Sarah Hyland), brilliant super-student Alex (Ariel Winter), less-dim-bulb-than-he-appears Luke (Nolan Gould), suavely nerdy Manny (Rico Rodriguez), and deadpan line deliverer Lily (Aubrey Eammons-Anderson), the results are likely to be uproarious with an expectedly generous amount of heart sewn into each episode (especially true for one of the season’s highlights: the season finale which finds Phil stranded away from Alex’s graduation party and represented by a robot Phil interacting with members of his troubled family: Mitch who’s lost his job, Cam who suspects Mitch is cheating on him, Hayley who’s spent the entire season in relationship limbo, and Claire who is stymied in finding the perfect graduation gift for Alex.

Apart from the absolute hilarity of the stories and performances each week, these actors bring a smile to the face by just facing the camera. Yes, the show uses one of those faux documentary style templates with the characters often talking straight to the camera and with a crew around filming the families as they conduct their daily lives. So whether Phil is trying to surprise Jay with a new deluxe grill for his birthday or forces super serious student Alex into taking her Senior Ditch Day to explore some old haunts of his (where Phil and Luke enact a comedy of errors for Hayley and Alex who then bond over her upcoming Cal Tech college experience, whether Cam and Mitch finally buy that upstairs condo for themselves or make a final decision on adopting another baby, the documentary cameras pick it all up with the casts’ candid confessions always adding to the fun. The stories concentrate much more time with the rapidly maturing children this year. Hayley spends the season attracted to manny-turned-real estate apprentice Andy Bailey (Adam DeVine) (and he with her in turn but neither fully expressing how each feels toward the other apart from a beautifully executed hospital scene), while Alex undergoes the trauma of college visitations, acceptance and rejection letters, awards’ day, the final announcement of valedictorian, and her graduation. Luke proves himself to be more skilled at things than he’d ever shown before while taking baby steps away from his grown up kid/father Phil who considers him his closest pal. The always special holiday episodes this season concentrate on Halloween, Thanksgiving, and Valentine’s Day (yes, Clive and Julianna make guest appearances). And in the season’s best and most creative episode, told completely through a computer screen, Claire attempts to keep tabs on her errant family in a series of Skypes, text messages, e-mails, and Facebook posts.

Here are the twenty-four episodes contained on three discs in the season six set:

The transfers retain the widescreen television aspect ratio of 1.78:1 from network broadcasts, and they are anamorphically enhanced for widescreen televisions. After four seasons of Blu-ray releases, season six is the second season relegated only to DVD. Last season’s transfers were soft and thoroughly unappealing. These are considerably better than last season’s transfers with good to very good sharpness (for standard definition) and color that is solid and consistently maintained. Contrast is likewise continuously well applied resulting in better than decent standard definition transfers of the 720p quality of the broadcast material. Each episode is divided into five chapters.

The Dolby Digital 5.1 sound mix mirrors the broadcast quality of the program. It offers a solid encode for the show’s most important element: dialogue. It’s placed firmly in the center channel and has been expertly recorded. Occasionally, there are some fleeting uses of the fronts and rears for ambient sounds: voices of muffled chatter in several restaurant scenes, a vehicle speeding past, and the like. Apart from the main title music, a background score is not really present in the series unless the characters enter a location which has piped-in music.

Awesome Halloween (4:35): actor Nolan Gould introduces the behind-the-scenes look of the Halloween episode with actor Ty Burrell recounting the plot of the episode.

Modern Connections: The Making of an Episode (8:55): a behind-the-scenes look at the two days of shooting and the weeks of post production putting together episode 616. Creator/producer Steve Levitan discusses the genesis for the episode and their pride in doing something never before attempted on television.

A Day with Julie (6:08): pretty much what it promises, we get snippets from a day on set with actress Julie Bowen in hair and make-up, at craft services, and then blocking and shooting a scene for episode 621.

An excellent if not outstanding season of Modern Family, season six proves the comedy engine for the show has not run down very much in fashioning hilarious escapades for the Pritchetts and the Dunphys. While Fox continues to disappoint by releasing this terrific series only on DVD, a good upconverting player makes this year’s DVD transfers a grudgingly acceptable compromise to no Blu-ray release.