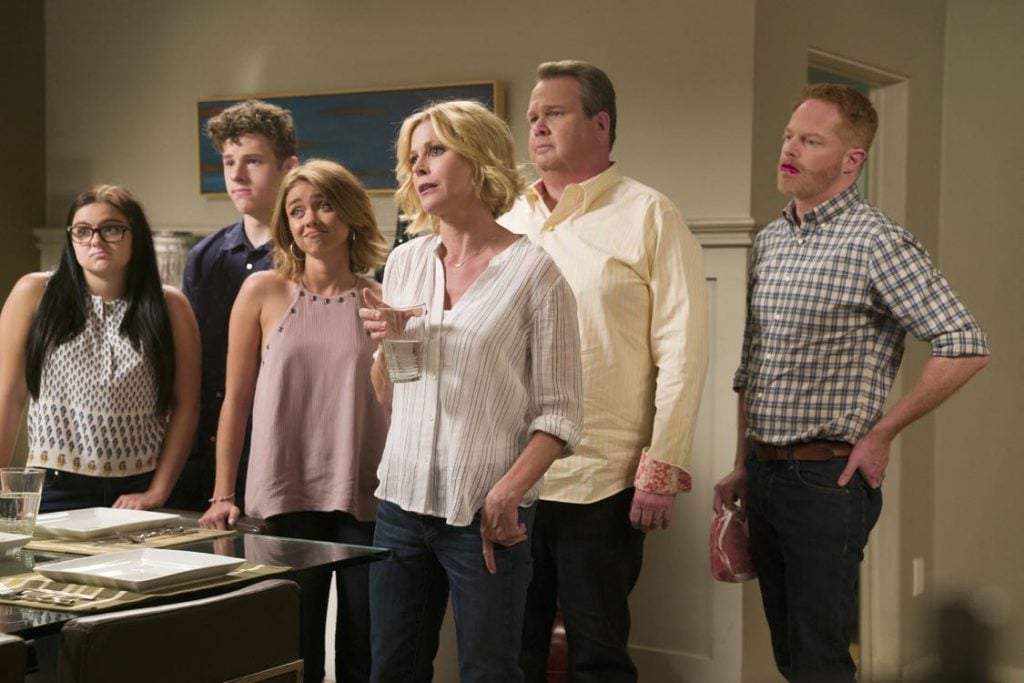 It’s pretty inevitable that after eight years on the air, the freshness and zip in the writing and performing would have abated somewhat in any television show, and sadly that also applies to ABC’s Modern Family, still the network’s highest rated comedy series but one that is no longer the ratings powerhouse it once was.

Thanks, Matt. I enjoyed the season a bit more than you did. My wife and I still watch it every week. My biggest problem with the series is that the Dunphy kids aren't as appealing now that they're older and the show is better when they are minimized. Conversely, the girl who plays Lily is a terrific child actress and steals every scene she's in.

I love seeing Fred Willard, but am concerned that he's aged so much and looks borderline frail. I know he's in his late 70s now, but he looked so good for so long that it's a shock to see him now. Hopefully he will continue to make appearances,

Sadly I quit buying the releases when they moved to DVD only. But it is Fox so fans are lucky the show even gets a release.
Reactions: Matt Hough

Watching the show on a weekly basis, I didn't notice any particular run of mediocre episodes, but watching all of them back-to-back over the course of three days brought out to me that it was a very uneven season for them. There are about four episodes that precede the Niecy Nash program that elicited nary a smile for the entire show, and for my history with Modern Family, that's very rare but indicative of the creative juices starting to slow.
Reactions: Steve...O

I had to laugh at that comment about the younger actors not being appealing any more with age. Are you suggesting that the show should get its own "Cousin Oliver"? Besides, there's Lily and Joe for the cuteness quotient. It'll be interesting to see how Manny and Luke make it in the outside world as Phil and Claire deal with the potential of an 'empty nest' in Season Nine. There are a lot of potential stories to be told there.
Reactions: Steve...O

Charles Ellis said:
I had to laugh at that comment about the younger actors not being appealing any more with age. Are you suggesting that the show should get its own "Cousin Oliver"?
Click to expand...

They already have their equivalent to Cousin Oliver and that is Joe. Sadly, I find him to be incredibly mediocre. Yeah, I know, he's only a kid, but I much prefer it when he's hardly used (or at least doesn't have a speaking part). If he doesn't improve, they should consider leaving him out almost entirely (just off-screen references or rare non-speaking scenes) or recasting.

I guess he just doesn't have natural acting ability. Thankfully, the girl playing Lily has gotten really good at the acting thing.

I, too, have stopped buying at Season 4, all because of the blu-ray thing. If Fox are going to pull that stunt, I'll just wait on the later seasons and snap them up at a flea market for five bucks apiece someday. The show certainly gets enough rerun play in my market that I'm definitely not starved for 'new' reruns.

Too bad this isn't offered on blu in other territories like some CBS shows (like Hawaii Five-0).
Reactions: MatthewA and Steve...O

This show needs to end. If they had ended last year, they might have gone out with some dignity left. Now it's just another sitcom that started good but wore out its welcome.
You must log in or register to reply here.