Agatha Christie introduced her elderly spinster sleuth Miss Jane Marple in a series of six 1928 short stories, but it wasn’t until 1930 in the cozy village mystery Murder at the Vicarage that she achieved more international exposure. Though the character is today wildly popular, Christie trotted her out only occasionally between those first efforts and her last appearance in a novel in 1976’s Sleeping Murder (which had actually been written during World War II and salted away for future publication). There were only twelve full length Jane Marple mysteries ever written. Despite this paucity of viable material, Miss Marple has been appearing in theatrical films and made-for-television movies for more than five decades and has been played by a host of award-winning actresses, among them Margaret Rutherford, Helen Hayes, and Angela Lansbury. But the greatest representation of the character has undoubtedly been offered by Joan Hickson who was the perfect embodiment of the no-nonsense bloodhound of the Christie novels and who managed to film all twelve of the Marple mysteries before her death in 1998. Over an eight-year period, Miss Hickson filmed all of the Miss Marple novels, and BBC has been bringing out the TV-movies in remastered Blu-ray transfers over the past few months in four-episode collections. This Volume 3 release offers the four final Miss Marple stories published (though these are not in the order in which Miss Hickson filmed the shows). 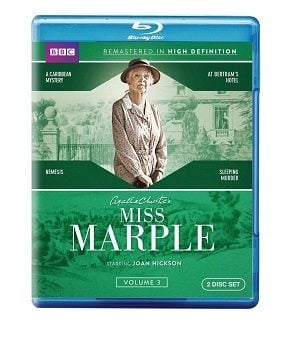 To get Miss Marple out of her staid village of St. Mary Mead to add some variety to her puzzles, Christie began sending her on vacation jaunts, and A Caribbean Mystery¸ perhaps the finest of the later Marple books, takes her to Barbados where the death of near-senile old Major Palgrave (Frank Middlemass) who had claimed the night before his death to have the picture of a murderer in his possession begins a series of three murders at this picturesque resort hotel. There are love affairs aplenty going on here and a handful of unhappy people making a great effort to make merry without much success. In addition to solving the murders, Miss Marple also makes the acquaintance of millionaire Jason Rafiel (Donald Pleasence) who not only assists her in her investigation but names her “Nemesis,” a title that will have wicked connotations later on in Miss Marple’s sleuthing career.

Miss Marple spends a vacation fortnight in London in her next adventure At Bertram’s Hotel, a sedate, proper hotel she had once stayed at in her youth. While there, she runs into an old acquaintance, gossipy old Lady Selina Hazy (Joan Greenwood) who introduces her to the cream of society who are also lodging there and might seemingly be involved in something potentially sinister. In the news during her stay is a succession of train robberies being pulled off without a clue for the police to investigate, but Miss Marple instead gets swept up snooping about in a couple of other interesting occurrences: a love triangle involving a mother (Caroline Blakiston) and daughter (Helena Michell) both involved with a former race car driver (Robert Reynolds) and the mysterious disappearance of absent-minded Canon Pennyfather (Preston Lockwood). This is one of those mysteries in which the murder happens very late indeed in the story, and Miss Marple’s herculean task is to find out how all of these disparate elements are somehow entwined.

Jason Rafiel (Frank Gatliff) reenters Miss Marple’s life in Nemesis, the closest Christie ever came to writing a sequel to one of her works. On his deathbed, Rafiel tasks Miss Marple with investigating the death of Verity Hunt, a young girl who had been engaged to Rafiel’s son Michael (Bruce Payne). Michael was the prime suspect of her brutal murder, but a lack of evidence saved him from prosecution though the specter of her murder has hung over his head ever since, and Rafiel wants his dogged “nemesis” to search out the truth to either finally free his son from guilt or send him to the gallows. To do this, Miss Marple and her nephew Lionel (Peter Tilbury) take a coach tour of historic homes and gardens which sends them to the area of England where the murder had occurred many years previously. Miss Marple is eager to solve the puzzle: a reward of £20,000 awaits her on the completion of her investigation. Like in so many of her final books, it’s a murder-in-retrospect puzzle, but it’s a very good one and one that again introduces us to a number of very unhappy people trying to carry on bravely through mutual loss and guilt.

Sleeping Murder brings the stories of Miss Marple to a satisfying if perhaps too easy conclusion, one of the simplest of all her many detective novels to solve. Upon buying a home in Dillmouth, newly married Gwenda Reed (Geraldine Alexander) is shocked to discover that she had once lived in this same house as a very small child, and she has vague memories of watching through the bannisters overhead someone named Helen being strangled in the hallway below. Vacationing in the area, Miss Marple assists Gwenda and her husband Giles (John Moulder-Brown) in determining the identity of the murdered woman, Helen Kennedy who had been Gwenda’s father’s second wife for a brief period before allegedly running off with another man. Helen’s older half-brother James (Frederick Treves) has a few letters she sent to him after her disappearance but knows only that she had three previous suitors who might have either been the one to carry her off or to do her in and dispose of the body. With Miss Marple investigating this twenty-year old murder in retrospect, the identity of the killer will become relatively obvious to one and all even before Miss Marple arrives at the conclusion.

All four of these made-for-TV films on two Blu-ray discs (all except A Caribbean Mystery divided into two parts for easy television broadcast over a two-week period) feature Joan Hickson’s superb performance as Jane Marple: the steely stillness and the calm, unflustered delivery of the actress paramount in making her the screen’s ideal representation of the elderly sleuth. And with these new Blu-ray transfers, the glorious location work in the Caribbean and in various points in and around England with first-rate acting from all of the guest performers really make these the best versions of the Christie novels on which they are based even with slight alterations of character suspects to eliminate clutter in the storytelling.

Filmed in 16mm originally, these programs are brought to Blu-ray in their original 1.33:1 broadcast aspect ratio in 1080p resolution using the AVC codec. Compared to the soft, brownish transfers found in the VHS and DVD versions of these programs, these new transfers are alive with vivid color, believable skin tones, and sharpness that makes the films come alive once again. The dust and dirt which were present on previous video releases have also been eliminated making these the go-to versions of these classic programs.

The DTS-HD Master Audio 1.0 sound mixes betray their age through a lack of rich fidelity. They have certainly been cleaned of any age-related problems with hiss or crackle, but there isn’t much on the low end of the sound design, and the upper registers can sound tinny and lacking resonance. Still, the dialogue is always easy to understand, and each mono track has been deftly mixed with occasional sound effects and music score to produce a decent audio program.

A Very British Murder – Part Three: The Golden Age (50:05, HD): Dr. Lucy Worsley discusses the 1920s and 1930s, the golden period of British detective fiction noting works by Agatha Christie and her personal favorite Dorothy L. Sayers. Surprisingly, Dr. Worsley commits a cardinal sin by revealing the identity of the murderer in one of Mrs. Christie’s most famous novels The Murder of Roger Ackroyd, so those who have neither read the book nor seen the David Suchet TV-movie version of the novel would do well to skip this entry entirely. Dr. Worsley also discusses a couple of famous real-life murder cases of the period – Dr. Crippen and William H. Wallace as well as the crime fiction writing of Graham Greene.

[A note on availability: BBC is making this set available to buyers through their website on June 9. Those who wish a discounted set through Amazon apparently will now have to wait until October 16th for it to become available through them.]

Miss Marple: Volume Three sadly brings the glorious era of Joan Hickson’s enactment of Miss Marple to a pleasantly satisfying end. As with the other two volumes in this series, the Blu-ray transfers put their standard definition counterparts to shame, and it’s unthinkable that fans of the author or these programs would want to have them in any other format. Highly recommended!

This is the version of Miss Marple that I recall watching on television growing up in the UK. No other actress has come close, in my mind, to portraying this role with quite the same tact as the delightful Joan Hickson.


Thanks for the review, Matt.

Got mine on order although for some weird reason I thought it was delayed until October.

SAhmed said:
Got mine on order although for some weird reason I thought it was delayed until October.

I've got a note about the set's availability in the special features section of the review.
M

Is there a preferred order for watching these (along with first two volumes)?


I see the note but I am still confused as my order is with Amazon but if you follow the link, the page states that the title will be released June 9th. Now this is still true but I am not sure how that then turns into an October time frame? Did you mean that this title maybe further discounted around then ?


I grew up with this series as well although ( I also very much like Margaret Rutherford's run at Miss Marple as well - different charm! ) and believe that Joan Hickson is the perfect embodiment of Miss Marple (as David Suchet is for Hercule Poirot)


Loved the review, very excited about it particularly as it contains my favorite episode, Nemesis. As a side note, can you imagine Miss Marple as a kind of terminator i.e. cannot be negotiated with and will not stop until she gets to the truth ...

A close friend of mine who pre-ordered the set from Amazon received a note from them stating that the release had been delayed until October 16th. When checking Amazon, I think they simply haven't gotten around to updating their Blu-ray page yet. The search page that pulls up both the Blu-ray and DVD listings does state October 16th.

Mike2001 said:
Is there a preferred order for watching these (along with first two volumes)?
Click to expand...

Well, the BBC has released the three volumes of films in their publication date order with Murder at the Vicarage coming first and Sleeping Murder coming last, but Miss Hickson's last appearance as Miss Marple was actually in The Mirror Crack'd from Side to Side in 1992 (found in Volume 2 in this series).

I am very much looking forward to this third set. There is really no adequate comparison between these and the DVDs which are, now, unwatchable for me.
You must log in or register to reply here.

F
Lie to Me Blu-Ray