DVD Review Meet Me After the Show DVD Review

XenForo Template Meet Me After the Show DVD Review

Another of Betty Grable’s puttin’ on a show musicals, Richard Sale’s Meet Me After the Show finds the star still peppy and ready to sing and dance despite the paper-thin plots she was continually pushed into. While this one didn’t bring forth any song standards, most of the numbers are enjoyable and offer some clever variations on Grable’s usual song and dance repertoire. A new leading man in Macdonald Carey was also a good idea even if the role he’s saddled with makes the film’s entire plot fall completely apart. But movie musicals of this era didn’t go in for complex narratives, so the song and dance has to do the heavy lifting here, and it offers a reasonably good time. 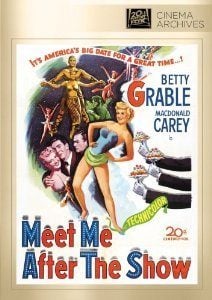 Tired of being undervalued by her impresario husband Jeff Ames (Macdonald Carey) and suspicious of his involvement with the backer (Lois Andrews) of his new musical, Broadway star Delilah Lee (Betty Grable) files for a separation in an attempt to wake up her husband. When these legal maneuvers don’t work, she appears to be going through with a divorce when she’s involved in a traffic accident that leaves her with amnesia. She only knows herself in her former guise as showgirl Kitty Lee who worked in a dive in Miami, so that’s where Jeff and Delilah’s Broadway leading man Chris Leeds (Eddie Albert) head to find her and attempt to restore her memory. Once there, though, they find she’s taken up with beachcomber David Hemingway (Rory Calhoun) and not interested in becoming a Broadway star.The screenplay by Mary Loos and director Richard Sale might have been a suitable frame for the movie’s song and dance if they hadn’t made Carey’s Jeff Ames such a completely dislikable and obstinate person. No one in the audience could be rooting for her to get back with him, and his hot and cold feelings for her and what’s she’s doing to attempt to bring him to his senses continue to be a turn-off throughout the movie. The score by Jule Styne and Leo Robin provide some fun if forgettable numbers, but the really memorable moments in this movie are provided by the film’s choreographer Jack Cole. He gives Grable two sensational showcases: “It’s a Hot Night in Alaska” in which she bubbles recreating a number as the lowdown Kitty Lee and “No Talent Joe” which finds her writhing around a stage full of bodybuilders (in a warm-up for his work with Jane Russell’s “Ain’t There Anyone Here for Love” two years later) featuring a snappy tune and another sensational dancer at her side – the young Gwen Verdon (who also takes part and gets billing in the seriously unexceptional finale “I Feel Like Dancing”). In fact, Cole also stages the other notable production number in the movie, the jazz-infused, stylized “Betting on a Man” which also allows Betty some impressive tapping making him the movie’s unquestioned M.V.P.Betty Grable was 35 at the time of the film’s production but playing a character here that she was probably ten years too old to be playing. Her singing and dancing are just fine, and Cole’s staging brings out the best in her abilities to be either sincere or saucy, but the end was clearly in sight for this kind of movie for her. Macdonald Carey shows off a surprisingly pleasing baritone voice in “Let Go of My Heart,” his lone song in the film, but he’s straight-jacketed by the impossible role he’s playing: an ungrateful, egomaniacal jerk who treats his wife as his own personal creation and who doesn’t actually seem to grow much by the end of the film. Eddie Albert is completely wasted as Delilah’s musical comedy co-star (even though he’s not given a note to sing despite having just starred on Broadway in Irving Berlin’s Miss Liberty), and Irene Ryan isn’t given much funny business as Delilah’s maid. Rory Calhoun makes a dashing if superficial romantic challenger for Delilah’s affections, and Fred Clark pops in for a few sardonic scenes as Jeff’s lawyer trying to get him to open his eyes to see what he’s throwing away.

The film is framed in its theatrical 1.33:1 aspect ratio. Sharpness is okay throughout the presentation, but color clarity, saturation levels, and appealing hues are not. Despite the junking of their Technicolor records for these films, even the remaining Eastmancolor prints feature color here that is mostly lackluster and lacking any punch. There are a couple of numbers where color seems a bit brighter and lusher, but most of the film offers a very unappealing, washed out color palette. Black levels aren’t anything to write home about either, and the print used for this transfer has colored dust specks, debris, and a late movie reel change marker very evident. The film has been divided into chapters every ten minutes, so this film has 9 chapters.

The Dolby Digital 2.0 sound mix is decoded by Dolby Prologic into the center channel. Not encoded quite as loudly as other Fox MOD titles, you’ll still likely find it more pleasing to turn the volume level down a few notches. There is some light hiss present and some crackle here and there, but fidelity is pretty good with dialogue no way compromised by the age of the sound elements or the sound effects and music which share the track with it.

The Fox MOD releases offer no bonus material, not even a trailer.

One of the last of Betty Grable’s showgirl musicals, Meet Me After the Show is reasonably enjoyable light entertainment. The Jack Cole-staged numbers themselves are the things that make this movie stand out from the unusually irritating leading male character and the film’s forgettable plot.

Oh dear. I love Betty Grable, I love musicals and I love the songs of Jule Styne. I do not love DVDs with bad picture quality.

Sorry Fox: no quality = no sale.

Another excellent review. While this dvd presentation through the Fox Cinema Archives program is definitely not up to the quality standards set by Warner Archive or Sony Choice, it's still very watchable. Of course, a remastered print would be preferable and those of us who love film deserve that type of respect, however, this version is a vast improvement over the vhs tape I recorded off the Disney Channel back in the late 1980's. Who knows if I have another 25 years plus to wait for the next iteration of digital home entertainment?
You must log in or register to reply here.
Share:
Facebook Twitter Reddit Pinterest Tumblr WhatsApp Email Link