After the phenomenal eight-year success of The Andy Griffith Show, Andy Griffith signed a movie deal with Universal that went nowhere. So, he came back to television and searched for years for a vehicle that would reestablish him with a massive television audience. (In the intervening years, he did headline two failed sitcoms, guest star on other programs, star in several made-for-TV films, and play supporting roles in movies starring other people.) Matlock brought Griffith back with a bang playing a wily Atlanta attorney whose folksy ways masked a diabolical ability to ferret out the truth from the tiniest of clues. An above average courtroom mystery series which enjoyed a nine-year run, Matlock is easy-going and easy to take. Matlock: Greatest Cases collects twelve episodes (eleven cases) on three DVD discs which offer those curious a nice sample of the character's typical courtroom behaviors (though several of these mysteries were certainly not high water marks in the series). 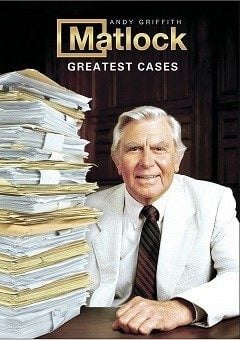 As in Perry Mason, the murder mysteries are almost always solved on the witness stand and most are constructed along a standard formula: we’re shown a person with a number of enemies (a nasty comic, a muckraking talk show host, a crooked used car dealer, a careless plastic surgeon, a randy marriage therapist), the person is killed, and Matlock and company (who changed quite a bit over the show’s nine-year run: see below) sniff out the killer. Occasionally, a Columbo-styled episode is attempted: we’re shown the murder first including who did it and how (the first two episodes on disc one from season one are examples of this, and there are two others in this set which also qualify). Then, we watch as Matlock tracks down clues to lead him to the solution we already know. The show never quite reaches the heights of surprise or suspense of Perry Mason or Columbo, but the episodes on their own are entertaining, especially with the congenial Andy Griffith playing the title character with charm and sass, picking up his ukulele occasionally to serenade us (in one episode here, he joins in a song with country star Randy Travis who’s playing an itinerant worker), and always showing us the missing elements needed to solve the crime before the end of the hour.

The show featured an unusually high number of turnovers in cast during its lengthy stay on different networks, many of whom are reflected in the episodes which have been chosen for inclusion here. Linda Purl lasted only the first season playing Matlock’s daughter Charlene and during her tenure (and for two additional years) Kene Holliday played Ben’s investigator Tyler Hudson. Nancy Stafford joined the cast as Ben’s legal associate Michelle Thomas and for much of her five-year stay, Clarence Gilyard, Jr. played Ben’s new investigator Conrad McMaster. Brynn Thayer played Ben’s other daughter Leanne for a couple of seasons with Daniel Roebuck as investigator Cliff Lewis. From his former Andy Griffith Show days, Andy brought in Don Knotts (as a screwy next-door neighbor) and Anita Corsaut (as a feisty judge) for occasional appearances during the show’s lengthy run. In this box set of highlight episodes, the guest stars are plentiful. Among the more famous names and faces are Dick Van Dyke (as a judge trying a case where he himself is the murderer, the set’s best episode), Piper Laurie, James McEachin, Conchata Ferrell, Robert Culp, Nancy Dussault, George Gaynes, Gregory Itzin, Scott Bakula, Seymour Cassel, Samantha Eggar, Patricia Heaton, Julie Sommars, Bryan Cranston, Milton Berle, Paul Leeds, and Terry O’Quinn.

Here are the twelve episodes covering the years 1986-1994 contained on three DVDs in this set:

The show’s 1.33:1 aspect ratio is faithfully delivered in these transfers. Though color is often strong and sharpness is above average (except when the cameraman is favoring his star with some soft focus photography in close-ups), the episodes are crawling with distracting aliasing, moiré patterns, pixilation, combing, and interlaced video noise likely due to its originally being shot on videotape and then ported to film. There are a few examples of white specks or other slight debris on various episodes. The shows are still entertaining to watch, and black levels are often very impressive, but those video artifacts may be problematic from time to time, especially with any kind of patterns being pictured. Each episode is divided into 6 chapters.

The Dolby Digital 2.0 stereo track makes impressive use of the music being filtered through the left and right channels (though there is a bit of a phasing problem on the first episode). True, that’s the only use of them since the center channel carries all of the other sound for the show: dialog and sound effects. And there is occasionally some light hiss present on a couple (but certainly not all) of the episodes.

There are no bonus features with this set.

Though not one of the greatest of television’s mystery series, Matlock has a certain easy charm and humor mixed with its mysteries. Those fans of the show likely already have all nine of the seasons which have been previously released. So, this sampler of eleven notable cases will likely be of interest only for those who want a taste of what this show offers.

(In the intervening years, he did headline two failed sitcoms, guest star on other programs, star in several made-for-TV films, and play supporting roles in movies starring other people.)
Click to expand...

IMDb lists it as being shot in 35mm; are they wrong (again)?

I don't believe you could have such interlacing artifacts if these shows were shot originally on film. I had always been told it was a videotaped series that was transferred to film, and it certainly doesn't look like other shows of the day which were shot on film. But I could be wrong. Maybe others will weigh in.
You must log in or register to reply here.