After the Oscar-winning success of Kentucky, it’s obvious 20th Century Fox would want to wring another horse racing drama out of its stable and thus Henry King’s Maryland was born. It’s not a sequel, obviously, as the films (while both starring Walter Brennan) take place in different states and involve different kinds of horse racing, but much of the feeling is the same, and they were both originally splashy Technicolor productions. Like Kentucky, Maryland is fairly predictable, but it features a winning cast and some decent sequences which give the movie an aura of authenticity since much of it was filmed on location. 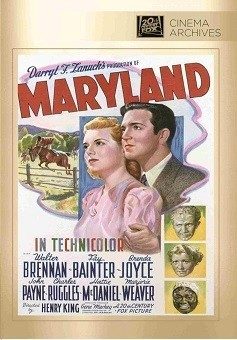 After her husband (Sidney Blackmer) dies in a tragic fox hunting accident, his widow Charlotte Danfield (Fay Bainter) closes their extensive stables and forbids any horses ever again on her property. She ships her young son off to boarding school in Europe, and years later when Lee (John Payne) returns, he’s (much to her chagrin) established himself as an expert horseman especially skilled in steeplechase. Danfield’s former trainer William (Walter Brennan) started his own stable after he was fired and plans to run his prized jumper Cavalier in the Maryland Hunt Cup, the top steeplechase race in the state, and Lee agrees to ride the horse in the race for his beloved “Uncle Bill.” This causes a rift with his mother who doesn’t want her son to ride under any circumstances for fear that she’ll lose him like she lost his father, and she’s determined to find a way to keep him from keeping his promise to ride.The movie opens almost as a travelogue of the state of Maryland with some historical references to the state’s concentration on horse breeding and racing, and the Ethel Hill/Jack Andrews screenplay includes some wonderful establishing ambiance of the Danfield’s love of horses nicely filmed by director Henry King and capped by a fine fox hunt sequence which, of course, ends in tragedy and which serves as the impetus for the remainder of the plot. The script does seem to spend an unconscionable amount of time with the rascally servant Shadrach (Ben Carter) showing his addiction to gambling and then indulging in an extremely overextended revival meeting where he gets “saved” (but not too saved). The widow’s fierce obsession against racing once she loses her husband is rather melodramatically written and acted, and though the bulk of the story occurs in (then) modern 1940, you’d think with a plantation-styled mansion filled with African-American servants that the events were transpiring a century earlier. But there’s no denying the climactic race is pretty exciting even if director King has to resort to some feeble rear projection and foreground actors on fake steeds to achieve the near-photo finish he wants for the ending. There’s a romance inserted into the story, too, between John Payne’s Lee and Uncle’s Bill’s granddaughter played by Brenda Joyce, but it’s not as saccharine as many such forced romances were in films of this era.Walter Brennan gets top billing here and gets to age from something closer to his natural age to the more grizzled character we’re more accustomed to seeing him play. He’s as cantankerous as ever and just as entertaining as always as a man truly obsessed with horses. Fay Bainter has to play a rather stuffy, insufferable character for most of the film, but the early scenes have her playing younger and more vivacious, and she’s a treat in these scenes. John Payne and Brenda Joyce are both perky and beautiful with paper-thin characters they could act in their sleep. Also on view (too briefly for my taste) is the wonderful Hattie McDaniel as the house cook and conscience and, as previously mentioned, Ben Carter as her shiftless husband who gets far more screen time than his Oscar-winning co-star. Charlie Ruggles has a few scenes as a family friend who tries to change Charlotte’s mind about horses but is unsuccessful.

The film’s original 1.37:1 theatrical aspect ratio is faithfully rendered here, and the image is very sharp with more than decent detail for a DVD. But there are line twitters and flashes with flowered dresses and patterns on occasion, and there is some colored debris that pops up from time to time, too. The Eastmancolor elements derived from the (likely) vibrant Technicolor three-strip originals aren’t bad, and skin tones are actually pretty lifelike with reds and blues registering especially well (greens seem anemic). Contrast has also been dialed in consistently. The film has been divided into chapters every ten minutes so there are 10 chapters present.

The Dolby Digital 2.0 mono mix has, like many Fox Cinema Archive releases, been encoded at excessive levels of volume which will require some manual adjustments to prevent distortion. Alfred Newman’s score and the various sound effects have been blended nicely with the well-recorded dialogue so that the track plays smoothly. There is a bit of hiss near the beginning of the movie, but it never becomes intrusive.

As good as Kentucky with a formidable cast and excellent location photography, Maryland makes for a decent addition to the Fox Cinema Archive collection.

Nice to hear of a non-disaster Technicolor release from FCA. If I might ask though, how problematic is color fringing? That's a hallmark of Fox Technicolor titles not given proper restorative care.

I didn't notice any problems at all with fringing. When they derived their master for this from their three-strip elements, someone did a careful job.
You must log in or register to reply here.