When you're a television offshoot of perhaps the biggest movie franchise going at the moment, you know you're going to be in for a lot of scrutiny. Marvel’s Agents of S.H.I.E.L.D. had a sizable premiere audience due to the vast popularity of that summer’s The Avengers, but it had a rocky road for the first two-thirds of its run with almost weekly decreases in audience numbers. Seemingly meandering and unfocused with an engaging episode followed by one or two that appeared disconnected and pointless, the show seemed to be in trouble. But when Captain America: The Winter Soldier brought a change to the Marvel universe that could be reflected in the television series, the show suddenly caught fire with the last half dozen episodes galvanizing in their speed, story construction, and a seismic shift in personalities of some major characters and with personal connections either strengthened or lost. And audience numbers seemed to perk up, too. The show was renewed for a second season and put in a later timeslot for its upcoming season to reflect its more serious nature. Looking back over the first season in retrospect, the episodes do seem tighter and more of a whole than they appeared on first viewing. While the season’s major twist does not appear to have been planned by the show’s writers in the early going, it was the best thing that could have ever happened to the show. 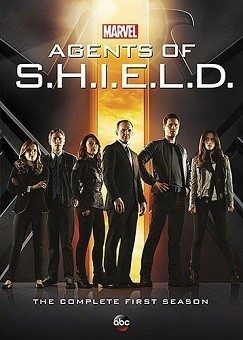 Strategic Homeland Intervention, Enforcement and Logistics Division (that’s S.H.I.E.L.D.) head honcho Nick Fury (Samuel L. Jackson who makes a couple of cameo appearances during the season as does Cobie Smulders’ Maria Hill) appoints newly revived Agent Phil Coulson (Clark Gregg) to man a small, elite squad of agents to investigate unusual, otherworldly events and individuals around the globe. Coulson chooses Grant Ward (Brett Dalton) as his muscle, Melinda May (Ming-Na Wen) for avionics, Leo Fitz (Iain De Caestecker) and Jemma Simmons (Elizabeth Henstridge) for engineering and technical know how, and recruits ace hacker Skye (Chloe Bennet) from the computer hacking vigilante group Rising Tide to give his team a try. While the three younger agents are completely green in terms of field operations, over the course of the season, each of them grows into their roles as wicked operatives who can deliver the goods under pressure, and pressure is what they get in a number of highly risky cases the team undertakes during the first half of the season. The pilot episode was written by siblings Joss Whedon, Jed Whedon, and Maurissa Tancharoen and directed by Joss Wehdon whose fingerprints are everywhere to be seen in the pilot and in subsequent episodes where his trademark wryness and dry wit even under a cloud of danger gives the series a hipness and cool vibe that carry it through some of the weaker episodes from the early going.As they go about these missions, a pattern begins forming that there is a growing enemy of power out there pulling the strings in the background. The team faces genetically altered men from Centipede (one of whom Mike Peterson/aka Deathlok played by J. August Richards recurs throughout the season), must deal with a mysterious woman in a flowered dress named Raina (Ruth Negga) who has her own unknown agenda, become aware of an enemy called the Clairvoyant who seems to know their every move, come up against cutthroat Cybertek lobbyist Ian Quinn (David Conrad), and must deal occasionally with another supervisor who is not a fan of this new ragtag team Victoria Hand (Saffron Burrows). All of these mysteries are dealt with while the team itself is exploring conundrums within its own ranks: Coulson is seemingly back from the dead with vague memories of Tahiti that don’t ring true and that he’s eager to find answers for. Skye, an orphan, becomes obsessed with finding out about her past. Melinda and Grant begin a sexual affair which seems ill-timed. Fitz and Simmons become self-conscious about their lack of field experience. The latter situation constitutes one of the better episodes from the first half of the season as Grant must take Fitz into the field on a dangerous mission in which the two men, the antithesis of one another, must work together and eventually bond over their shared experience, a relationship that reaps big dividends in the season’s final third.The major twist that revitalizes the series and sets it off on a different course for season two comes with episode 16, and once Bill Paxton joins the show as S.H.I.E.L.D. operative John Garrett (with B.J. Britt’s Antoine Triplett as his right hand man), all of the disparate threads from earlier in the season begin to tie together and go to make the series a crackerjack adventure yarn with mountains of suspense each week. By this point, the show has become highly serialized, so unlike the earlier episodes which could conceivably be seen out of order, the final half of season very definitely follows a careful building of a plot that plugs directly into the events of Captain America: The Winter Soldier and must be seen in sequence. With shifting allegiances, shocking discoveries, and lives definitely on the line, Marvel’s Agents of S.H.I.E.L.D. finally delivered on the promise of its pilot and its franchise feature films.Here are the twenty-two episodes contained on five DVDs. The names in parentheses denote the participants in that episode’s audio commentary:1 – Pilot2 – 0-8-43 – The Asset4 – Eye Spy5 – Girl in the Flowered Dress6 – Fzzt (writer Paul Zbyszewski, actors Elizabeth Henstridge, Iain De Caestecker)7 – The Hub8 – The Well9 – Repairs10 – The Bridge11 – The Magical Place (writer Brent Fletcher, actors Clark Gregg, Chloe Bennet)12 – Seeds13 – T.R.A.C.K.S. (writers Lauren LeFranc, Rafe Judkins, actors Ming-Na Wen, J. August Richards) this is the best of the episodes before the twist14 – T.A.H.I.T.I.15 – Yes Men16 – End of the Beginning17 – Turn, Turn, Turn18 – Providence19 – The Only Light in the Darkness20 – Nothing Personal21 – Ragtag22 – Beginning of the End

The program’s widescreen television aspect ratio of 1.78:1 is faithfully delivered in these anamorphically enhanced transfers. For standard definition transfers, they are at the top of the line with excellent sharpness and color that is solid and consistent with believable skin tones. Due to the vast amount of green screen work which is used here, the standard definition nature of the transfers probably works in their favor allowing the foreground live action and the background added-in computer visuals to blend seamlessly. With standard definition, of course, there is almost always the risk of moiré patterns and aliasing, all of which are present but not to a debilitating degree. The early episodes have been divided into 6 chapters while later ones that begin with recaps have 7 chapters.

The Dolby Digital 5.1 sound mix on these DVDs mimics the network broadcasts quite well and provides an active and involving soundscape for this action-based series. Dialogue is well recorded and has usually been placed in the center channel with an occasional bit of directionalized dialogue used in appropriate moments. Split sound effects reverberate throughout the fronts and rears when appropriate with notable panning across and through the soundstage. Bear McCreary’s music also gets a nice spread through the fronts and rears.

Audio Commentaries: there are three available (see episode list above). None are particularly effective. The first is rather quiet (Iain De Caestecker barely speaks), and the other two are overly chatty with people talking over one another and little information given about the production of the actual episodes.Journey Into S.D.C.C. (13:13): cast and select crew members relate their first trip to Comic-Con 2013 before the series had premiered: the problems on the road, their fear of fan expectations, and their wildly enthusiastic reception.Assembling a Universe (43:02): a television special that documents the Marvel franchise brand beginning with Iron Man and continuing through the TV series and the most recent Captain America movie. Many Marvel executives and sound bites from the cast and crew of those Marvel films and the television series are interspersed with clips from the movies and series.Field Reports: brief behind-the-scenes looks concentrate on one or more actors’ experiences in certain episodes:VFX Breakdowns: two sequences involving major CGI effects are shown in various stages ofe execution. “Lola Takes Flight” (1:09) and “Free Falling (1:36)Gag Reel (6:34)Deleted Scenes (6:56): eight scenes may be viewed individually or together in montage.Promo Trailers: Guardians of the Galaxy, Captain America: The Winter Soldier.

After an erratic start, Marvel’s Agents of S.H.I.E.L.D. found its way into becoming a fine action series in the latter third of its first season, and the second season promises to build on the strong premise left to the regulars starting out with a new directive. While Marvel didn’t send Blu-rays for review, the DVDs which were sent offer very good video and audio that an exceptional upconverting player can make look quite pleasing.

I stuck with this show throughout the first season, and was really glad I did. The patience paid off with the home stretch of episodes. I give Marvel a lot of credit for embracing the seismic shift brought about by events in Winter Soldier - it really did provide a means for the show to finally come into focus.

I would be really interested in rewatching the season without the multi-week interruptions that seemed to constantly disrupt any sense of continuity the show was trying to build over the first half of the season.

Word is for season 2, the show will air half the episodes in consecutive weeks with a break to introduce the Peggy Carter show, then AoS will return for the second half, again - uninterrupted.

This and "Black List" are the two shows I'm most looking forward to returning. Thanks for the review!
You must log in or register to reply here.