An alternative point of view retelling of the Sleeping Beauty fairy tale, Robert Stromberg’s Maleficent might not quite have the enchantment and delicate magic of the classic 1959 Disney animated feature, but it certainly scores points for its emotional storytelling for its title character and for fleshing out characters who were certainly one-dimensional creations in the original work. Running a very comfortable ninety-plus minutes and paced cleanly to hit the familiar story’s high points with some neat twists along the way, Maleficent is definitely a crowd pleaser and well worth seeing. 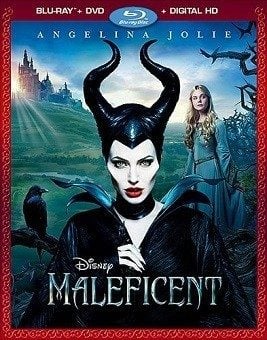 Childhood friends whose innocent affection grows into something stronger as they mature, the fairy Maleficent (Isobelle Molloy as a child, Angelina Jolie as an adult) and human stable boy Stefan (Michael Higgins as a child, Sharlto Copley as an adult) seem to disprove the notion that the fairy and human worlds can’t live together harmoniously. But when King Henry (Kenneth Cranham) fails to conquer the fairies led by Maleficent, he offers his kingdom to anyone who can bring her down, and Stefan can’t resist the temptation of the crown, so he clips Maleficent’s wings permanently grounding her. When King Stefan and his wife have a child Aurora (Elle Fanning as a teen), Maleficent crashes the christening and curses the child to a sleeping death before her sixteenth birthday if she pricks her finger on a spinning wheel spindle. When three fairies (Lesley Manville, Imelda Staunton, Juno Temple) take the child deep into the woods to raise her, Maleficent with her enchanted assistant Diaval (Sam Riley) oversees her upbringing and gradually comes to love the girl with a sparkling personality, but she can’t reverse the curse she has already placed and must try to think of another way to thwart the curse and Stefan and his forces who will definitely seek vengeance on her once the spell takes effect.Though it could have easily gone campy and unbridled, Linda Woolverton’s screenplay manages to sidestep that for the most part (though maybe a few more jokes and some added slapstick at the expense of the three dimwits who supposedly are Aurora’s guardians might have lightened things up a bit more since there are definite changes in many characterizations from the animated to the live action version). The backstory of Maleficent and Stefan’s doomed relationship is quite touching in its dastardly betrayal allowing both adult actors to play the treachery and unfaithfulness quite nicely and giving Maleficent motivation for her evil curse on an innocent child. Since Aurora and Maleficent’s relationship forms the central core of the story, more might also have been done with it, especially since the “official” guardians are nowhere to be seen during those years when the dark fairy is befriending her “enemy” and convincing her she’s her fairy godmother. But the special effects are superb throughout this fantasy (the moors are especially fascinating with its odd mix of fairies, ogres, and woodland sprites and other creatures), and the final confrontation with Stefan and his guards (yes, a dragon is involved, but it’s not Maleficent) makes a rousing climax to the picture. Who would have ever guessed that in this version of the fairy tale, King Stefan would emerge as the true villain of the piece?Weighed down with enough prosthetics to cover a football field, Angelia Jolie still manages to convey every needed emotion and makes Maleficent one of the true misunderstood dark characters of the Disney legacy. Her acting prowess and screen charisma allow her to dominate her every appearance, and she shares scenes beautifully with all of her co-stars. Primary among them is the role of her assistant Diaval played by Sam Riley. Merely a squawking raven in the animated feature, here he’s a multi-purpose associate changed by the dark fairy into any form that’s needed, and he also serves as a sort of Jiminy Cricket conscience for Maleficent garnering audience sympathy for the pair of them. Elle Fanning’s Aurora is bright and shining, slightly more fleshed out than the animated version of the princess and instrumental in saving Maleficent when things look darkest for her. Sharlto Copley’s Stefan turns malignant before our eyes as ambition overpowers his love though once he makes that transition, he’s a standard edition villain eager to retain his power at all costs. Brenton Thwaites as Prince Philip has very little screen time to develop a character (he’s pretty much a non-factor in all of the climactic events unlike the animated fairy tale) while the trio of Lesley Manville, Imelda Staunton, Juno Temple are certainly incompetent nitwits but might have been used more thoughtfully to flesh out Aurora’s growing-up years.

The film’s theatrical aspect ratio of 2.40:1 is faithfully rendered in this 1080p transfer using the AVC codec. Sharpness is beautifully maintained despite tons of green/blue screen backgrounds, and color is eye-popping in the movie’s brightest scenes before gloom and doom hits the area. Skin tones are appealingly realistic. Black levels, very important in the forest of thorns sequences and in the dingy interior of the castle for the climax, are exemplary. Contrast is also superbly maintained. The film has been divided into 20 chapters.

The DTS-HD Master Audio 7.1 sound mix offers another reference quality soundtrack for those with the added back speakers in their array. There are lots of impressive pans across and through the soundstage along with split effects that give a wide-ranging expanse to the sound design. Dialogue has been masterfully recorded and gets the directionalized treatment for specific scenes in the film (though most of it goes into the center channel). James Newton Howard’s bold and brassy music also gets splendid placement in the fronts and rears, and there is plenty of bass throughout to keep the LFE channel busy.

Deleted Scenes (6:41, HD): five scenes may be viewed individually or in montage.Aurora: Becoming a Beauty (4:53, HD): producer Joe Roth and stars Angelina Jolie and Elle Fanning talk about their great fondness for Sleeping Beauty and their excitement about this new retelling of the tale.From Fairy Tale to Feature Film (8:13, HD): producers Joe Roth and Palak Patel, writer Linda Woolverton, director Robert Stromberg, and actors Angelina Jolie and Sam Riley express their lifelong interest in the character of Maleficent and their desire to tell a different story about her.Building an Epic Battle (5:48, HD): writer Linda Woolverton discusses the importance of the battle that ends Act I of the film while producer Joe Roth, effects supervisor Carey Villegas, and the stunt coordinator talk about the effect that went into making it all appear seamless on the screen.Classic Couture (1:34, HD): an intimate examination of the elaborate headpiece for Maleficent and her rings with voiceover from costume designer Anna B. Sheppard.Maleficent Revealed (4:45, HD): scenes are shown as they were actually filmed and then with special effects layered in to make for a completely composited picture. Promo Trailers (HD): Cinderella, 101 Dalmatians. DVD/Digital Copy: disc and code sheet enclosed in the case.

While it’s a great shame that Disney has once again chosen not to release the 3D version of Maleficent domestically (the fantasy elements of the story would appear to be made for the medium as much as in Alice in Wonderland and Oz the Great and Powerful, also produced by Maleficent’s Joe Roth and released here in 3D by Disney), the movie is sure to become a family favorite with its alternate entertaining telling of one of the world’s most famous fairy tales. Reference quality picture and sound of the 2D version makes this release one that will likely be prized by many.

I'm a big Disney fan and have seen all the classic animated features any number of times. I wasn't really sure if I wanted to bother with this film.

But you have made it clear that I should give it a chance and we will let the chips fall where they may!

Personally, I think Angelina Jolie is under-rated in terms of her acting. I think people are overwhelmed by her beauty and sometimes can't get past that. So now I will look forward to seeing what she does with this intriguing role.

My criticism is in sync with yours: the only part of the the film that left me wanting was the three little fairies. They felt very underdeveloped to me. Otherwise, I was surprised how much I enjoyed this.

Thanks again for a review of the Blu-ray.

I haven't seen it, but the wife has, and I have been told I must get her the Blu-ray.
You must log in or register to reply here.

UHD Review A Few Words About A few words about...™ Black Widow -- in 4k UHD Blu-ray