Robert B. Bean’s Made for Each Other takes the comedy of neuroses and beats it to within an inch of its life. The two main characters in the film are painfully flawed and sometimes almost dangerously dysfunctional, and despite the fact that we know going in that the stars who wrote and are playing them are married in real life, there’s not enough evidence offered here that they truly belong together. There are plenty of wry lines, and a nice cross section of New York character actors gets the chance to perform in the spotlight for a few choice scenes, but Made for Each Other (which has nothing whatsoever to do with the classic 1939 romantic drama of the same name) is more shrill than swell. 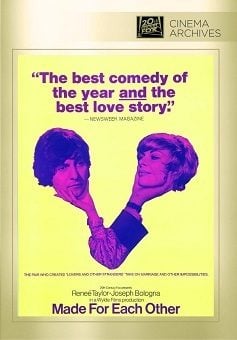 Meeting at a group therapy class, unlucky-in-love singles Pandora (Renee Taylor) and Giggy (Joseph Bologna) find they have their incredibly dysfunctional childhoods (she’s Jewish; he’s Catholic) in common, and they begin to go out together. Pandora wants a career in show business in the worst way, but her career has been stymied due to a genuine lack of talent. After going to bed together where Pandora enjoys her first-ever orgasm, she’s sure Giggy is the man for her, but he despises her new nightclub act and knows his strict parents will never welcome a Jewish girl into the family, so he’s convinced he needs to end things with yet another failed attempt at establishing a relationship with the opposite sex.

After scoring a great success with their script for the hit film Lovers and Other Strangers (adapted from their Broadway play), Renee Taylor and Joseph Bologna obviously wrote this script with themselves in mind to play the leads. While they fit the roles to perfection, they turn out to be characters in whom we don’t have much interest. We’re offered extensive flashbacks (sometimes amusing ones as Giggy tries to find himself unsuccessfully trying the priesthood, barbering, and black activism) to pivotal moments in the growing up years of both characters (seeing each of them fail in love relationships and both of them smothered by assertive, critical parents or an indifferent one in the case of Panda’s father) perhaps to generate some sympathy for them with the audience. But the script and Robert B. Bean’s direction focuses on far too much yelling throughout the storytelling (especially tiresome at the New Year’s Day family dinner at Giggy’s folks’ house); this is a film where lung power is as important as acting talent, and it all becomes wearying long before we get to the climactic face-off at the waterfront between the two protagonists where they scream their way to a resolution. Bean also relies far too much on close-ups of actors rarely allowing the mise en scène to develop naturally within the sequences (this especially hurts Pandora’s new nightclub act complete with a tragic Marlene Dietrich impersonation that we don’t see well since the camera is too close all the time), giving the film more of a TV rather than movie appearance.

While the star duo of Renee Taylor and Joseph Bologna certainly made plenty of film and television appearances, their stars never rose particularly high; they don’t quite have the sparkle to carry a character-infused comedy such as this one on the big screen (though it probably plays better on television). But they’ve got a terrific cast of character actors to support them. As her parents, the entertaining Helen Verbit and the rascally Louis Zorich; for his folks, the incredibly domineering Paul Sorvino and the forceful Olympia Dukakis. Ron Carey and Despo have some bright lines in the group therapy sessions led by Norman Shelly’s Dr. Furro, while Candy Azzara as one of Gig’s girl friends and Adam Arkin as the young Gig make memorable impressions in small roles.

The film’s 1.85:1 theatrical aspect ratio is faithfully reproduced in this anamorphically enhanced widescreen transfer. The problem comes with the print used for the transfer: it’s very brown with lots of soft focus (not just the flashback scenes are soft but many other moments in the movie), and color is drab with unappealing skin tones and not a tremendous amount of detail. There are also dirt and dust specks and a little debris that make themselves known throughout the presentation (though reel change cues are not present). The film has been divided into chapters every ten minutes so this film has 11 chapters.

Volume needs to be adjusted downward to prevent distortion on home playback equipment. The Dolby Digital 2.0 sound mix is decoded by Dolby Prologic into the center channel. You’ll hear some minor hiss and sporadic crackle in the background, and dialogue is sometimes muddy, perhaps a problem with the recording and the lack of a budget for looping afterwards. Trade Martin’s nondescript music blends well with the atmospheric effects and dialogue, but it’s an underwhelming soundtrack rendering.

The 1971 version of Made for Each Other seems a bit forced and heavy-handed now some forty-four years since its big screen premiere. The dry wit and some comic confusion still plays well enough, and fans of New York character actors will likely enjoy rediscovering them again in this overloud comedy-drama. The Fox made-on-demand disc, however, does the film no favors in presentation.

UHD Review In the Line of Fire UHD Review