Machete Kills, as you might expect, hacks its way onto Blu-ray with an edition that shows off the bloody business as well as could be expected. It’s unlikely that anyone expects a great movie out of this material, but Robert Rodriguez isn’t trying for art here. Fans of Danny Trejo and Rodriguez will likely enjoy the carnage as the title character slashes his way around, but things drag on a bit too long for more casual viewers. The Blu-ray presents the movie in solid high definition picture and sound, with a minimum of special features included on the disc. 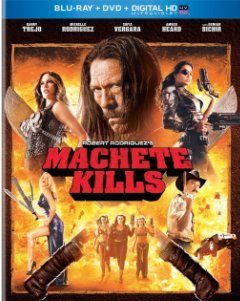 Ah, January. Normally at this time of year, we can expect the latest direct-to-video opus from Roel Reine, usually including Danny Trejo in a fury of low budget goodness. For 2014, we seem to have been spared that onslaught, mostly due to Reine’s Dead in Tombstone having been inflicted on Blu-ray back in October. On the other hand, we have been tossed a new Robert Rodriguez Machete sequel, starring Trejo but featuring a healthier budget and the strong directorial sensibilities of Rodriguez. Produced by Rodriguez at his facility in Texas, Machete Kills is a well-directed but overlong presentation of an intentionally, gleefully bad script. For those unfamiliar with this material, I’ll keep it as brief as I can. The Machete concept stems from one of the joke trailers Robert Rodriguez cooked up for Grindhouse in 2007. The basic idea was to star Danny Trejo as Machete, a Chicano version of James Bond, an unstoppable, unkillable one man army being sent on high risk missions with his deadly machete. It was a silly idea and got the appropriate laughs during Grindhouse. But Rodriguez and Trejo weren’t done with the idea. So, in the same manner as Hobo With a Shotgun, another successful joke trailer from the 2007 movie, the guys went ahead and did a full production based on the original premise. 2010’s Machete was the result, and it was actually pretty successful at the box office, as well as on home video. Encouraged by that success, Rodriguez and Trejo teamed up again for this sequel, based loosely on the promise of further movies made at the end of the 2010 film.SPOILERS HERE: Machete Kills isn’t that interested in telling a story beyond the basics needed to get Machete from one action set piece to another. Within two minutes of the opening bell, the gunfire and bloodletting has begun, and the movie features what feels like an endless parade of opportunities for Machete to get into crazier and crazier fights. Also along for the ride here are Mel Gibson, Charlie Sheen, Michelle Rodriguez, Demian Bichir and Tom Savini, each clearly enjoying the opportunity to ham it up while either helping or taunting Machete, or both. The movie features cameos by William Sadler, as well as Walt Goggins, Cuba Gooding Jr, Lady Gaga and Antonio Banderas as a very special assassin hot on Machete’s trail. There’s a wildly over the top performance by Sofia Vergara as a madam with an axe to grind, and it’s in this performance that the movie really feels like it’s straining to be outrageous and funny but not quite getting there. The appearance of Mel Gibson is also an odd one – he’s enjoying playing a James Bond villain, but the performance feels a bit forced, and it’s a tough moment to remember that we’re looking at someone who used to be a matinee idol back in the day. It was one thing to watch Jimmy Stewart and Burt Lancaster age into elder statesman – it’s another to watch Gibson playing this kind of material. Danny Trejo himself does what he can, but it’s a limited performance of what is really a one-note character. Which isn’t a criticism of Trejo – just a note that the main character of this piece has very little going on other than the on-screen carnage. MORE SPOILERS: All of this might work at an extremely short running time – say, under 90 minutes. Given how little story there is, and given the shallowness of the characters, one might think it would be best to keep things clipping along quickly and not dwell on anything. Sadly, this movie clocks in at nearly an hour and fifty minutes, including at least 20-25 minutes of padding along the way. Even action movie buffs are likely to be checking their watches at some point after the 30 minute mark, as the movie never really builds any momentum. Where even an action parody will build along the way from smaller set pieces to bigger ones, Machete Kills presents a nearly random assembly of engagements, even as the story seems to be indicating it’s trying to find a climax. And then, just as suddenly as the movie started, it simply ends. One gets the impression that Rodriguez and Trejo are setting the audience up for a third go-round, as shown by the joke trailer for their next opus: Machete Kills…In Space! Given the limited performance of this movie at the box office, one can only wonder if that sequel will ever happen, or if Machete has made his last swing.Machete Kills will be released on Blu-ray and standard definition on January 21st. The Blu-ray has everything from the standard DVD, and adds high definition picture and sound.

Machete Kills is presented in a 1080p AVC 1.85:1 transfer (@ an average 32 mbps) that presents Robert Rodriguez’ crisp cinematography in solid high definition. Multiple environments and flesh tones are presented accurately, which is ironic, given that the movie starts with the distressed-film look of Grindhouse (to set the tone) and then segues into state of the art HD images. The various greenscreen composite shots come off well, as do some shots where intentionally bad rear-projection is employed. (At one point, Mel Gibson’s Vaz takes Machete on a tour of his plant via landspeeder, and the background behind them is notably, intentionally, a projection.)

Machete Kills is presented in an English DTS-HD Master Audio 5.1 mix in English (@ an average 4.5 mbps, up to 5.4 mbps), which makes gleeful use of all the speakers in the home theater, including the subwoofer. Given the style of movie, it’s no surprise that the surrounds are regularly filled with gunfire or loud music, and the subwoofer constantly makes its own comment on the action. This is definitely not a movie to watch late at night if you are sharing a wall with your neighbors.

The Blu-ray presentation of Machete Kills comes with a pair of special features, both presented in high definition: a collection of deleted scenes, and a making-of featurette. The Blu-ray packaging also includes the DVD of the movie, which has the same special features, albeit in standard definition.Deleted and Extended Scenes – (20:10 Total, 1080p) (AVAILABLE BOTH ON DVD AND BLU-RAY) – This is a collection of deleted material from the movie, including some full scenes from the movie that are now augmented with additional footage. As can be expected, there’s nothing critical here. If anything, one could have wished for this section to have been larger and the movie itself to have been shorter. The scenes may be viewed individually, or via a “Play All” function. Making Machete Kills – (20:20, 1080p) (AVAILABLE BOTH ON DVD AND BLU-RAY) – This is the standard making-of featurette one would expect. It includes the usual film clips, intercut with on-set video and bits of interviews with all the main players in the movie. The usual mutual compliments are passed around, with all the cast talking about how much they enjoyed working with Robert Rodriguez, and how much fun they have had working on his movies. There’s no real information about the actual production here until you look past the interviews to just watch the on-set bits. And there you can see a little more of the actual conditions – including a fair amount of greenscreen work and what look like fairly small sets overall at the Texas facility. Amber Heard does offer a nice quote about auditioning for the movie in Spanish, while some of the cast seem to think of Machete as a Chicano movie hero…DVD Copy – A second disc is included in the package, holding the standard DVD of the movie, presented in standard definition in an anamorphic 1.85:1 picture with Dolby Digital 5.1 sound in English (448 kbps). The special features are included as well. The DVD also contains a Previews menu, holding trailers for Hit & Run, End of Watch, Silent Hill: Revelation, Silent House, The Host, A Haunted House, Killer Elite and The Grey.Digital Copy – Instructions are included in the packaging for downloading a digital copy of the movie to your laptop or portable device. Subtitles are available for the film and the special features, in English, Spanish and French. A full chapter menu is available for the film.

Machete Kills is an occasionally entertaining movie, clearly assembled with a lot of affection for the material by a strong director and a willing cast. It’s problems stem from it trying too hard to go over the top, and from its bloated length. Robert Rodriguez is a much more accomplished director than Roel Reine, but movies like this don’t allow him to show many examples of that. Fans of Rodriguez and of Danny Trejo will likely want to rent this to see it for themselves. Fans of Lady Gaga will undoubtedly enjoy her cameo. The Blu-ray features solid picture and sound. The only issue here is the movie itself.

Did a little research on the film's theatrical distributor, Open Road. Apparently, it is a co-venture between Regal and AMC, which I find a bit interesting, since in the golden days of cinema, most of the theaters were owned by the studios.
You must log in or register to reply here.