That’s all folks! In the third and final volume of Warner Bros.’ high definition cartoon collections, Bugs Bunny shorts make up over one-third of the selections. Equally beloved characters from the Looney Tunes pantheon aren’t exactly shortchanged, but cartoon collectors wanting more breadth and variety may wind up feeling a little disappointed in this last installment, even though the Platinum Collection never quite lived up to everyone’s expectations. 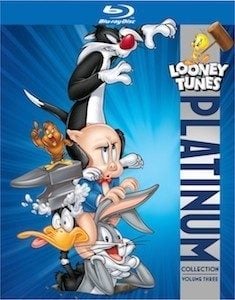 Less than ideal sales figures for the second volume of the Platinum Collection, which came out almost two years ago, put production of this third installment in jeopardy. But after several fits and starts it’s finally come to market, albeit with some budget-related limitations. Namely, there are only four shorts making their debut on disc, as opposed to the 10 offered in the previous release. While the Platinum Collection was never about debuting cartoons from Warner Bros.’ archives, but giving previously available classics the high definition treatment, collectors – for better or worse – have always hoped the studio would strike a balance between the two ambitions. Though most would say it’s failed in that regard, especially with the meager amount of new material in this final effort, only the most stubborn will have passed up the first two volumes, given what they offer in terms of technical quality and extras. The same holds true for Volume Three – it’s not what some had hoped for, but picking up the release, and thereby finishing off the series, will be a foregone conclusion for the majority of collectors.Disc One is dominated by shorts starring Bugs Bunny; 18 out of the 25, to be precise. Each is bound to induce nostalgia, but the ones that particularly strike a chord with me include “Hiawatha’s Rabbit Hunt,” “A Corny Concerto,” “Bugs and Thugs,” and “Knighty Knight Bugs” (not surprising, most of them were nominated for Academy Awards).The remaining seven shorts on Disc One are classics in their own right, celebrating Father’s Day with the Three Bears (“A Bear for Punishment”), following Charlie Dog to the Deep South (“Dog Gone South”), and (making its optical disc debut) exploring how far Yosemite Sam would go for a buck (“Honey’s Money”).Disc Two offers more variety from Looney Tunes’ pantheon of characters and star stalwarts Porky Pig, Daffy Duck, Elmer Fudd, Sylvester the Cat, Tweety Bird, Speedy Gonzalez, Wile E. Coyote, Road Runner, and Foghorn Leghorn. Three cartoons – “Life with Feathers,” “Tree for Two,” and “Beep Prepared” – are new to optical disc. The final three – “Rhapsody in Rivets,” “High Note,” and “Nelly’s Folly“ are Academy Award nominated shorts with more artistic concepts and aesthetics.

All 50 cartoon shorts are accurately framed at 1.33:1 and presented in 1080p with the AVC codec. While viewers will certainly spot instances of dust and dirt, physical “imperfections” from the hand-drawn animation process, and a faded quality to some of the older pieces, nothing should be considered distracting or problematic if one is aware of their history. In fact it’s a little surprising the pieces look as good as they do, with their deep, saturated colors, solid contrast and black levels, and consistently healthy levels of grain. Problems that were sometimes found in the past DVD collections – namely digital noise reduction, macroblocking, and compression noise – are nowhere to be found, giving the animation a beautiful overall sense of depth and transparency. For those of us who grew up watching the cartoons broadcast over standard definition TV, this is undoubtedly the best they’ve ever looked, while for those who may have seen them screened theatrically, it’s the best they’ve looked in a long, long time.

Dialogue in the Dolby Digital 1.0 track is consistently clear, detailed and intelligible. LFE is non-existent, but the tracks exhibit good depth and dynamic range, with few instances of strain or distortion. There’s slight variations in levels and tonality from piece to piece, but considering the variety of material, that’s not exactly surprising. While a lossless option would have been nice in principle, the lossy track gets the job done without any major offenses.

Many of the items in the vast complement of extras will be familiar to owners of the Golden Collection DVDs – audio commentaries, isolated music and effects tracks, and various behind-the-scenes featurettes. The lion's share of material has been previously released, but there’s a new commentary for the debuting short “Honey’s Money.”[DISC ONE]Audio CommentariesAudio Programs"Behind the Tunes” FeaturettesDocumentariesHair-Raising Hare Storyboard Reel (7:49, SD)[DISC TWO]Audio CommentariesAudio Programs“Behind the Tunes” FeaturettesDocumentariesFrank Tashlin’s Storybooks

After the previous two volumes, collectors should know what to expect with this third volume of the Looney Tunes Platinum Collection. Though everyone might not agree with Warner Bros.’ selections, it’s hard to deny the quality of the presentation and breadth of special features included. If that’s not enough to make a sale, Volume Three is a no-brainer simply because it finishes off the Platinum series.

Great review, but a depressing one. I've lost hope of getting a complete collection of Loony Tunes. And disc one with all that Bugs Bunny sounds like a chore to watch.

I'll be picking it up, but I'm waiting for a dirt cheap sale. no need to buy it at full price seeing as sales don't matter, there series is done.

One thing I thought to mention in the review, but spaced, was the notion of having Looney Tunes go the route of Warner Archive. It'd be even nicer if they'd allow you to pick and choose what to put on the disc, but that's probably asking too much.

Archives is a possibility. My problem is they have already baled on the series, what, three times now? Will the archives be blu, or will they continue on DVD with where the Golden Collections and Super Stars series left off? Do we support a volume in the archives only to have it cancelled there too?

I think there'd be less chance of cancellation on Archives because it would be burn on demand and they wouldn't gain anything by pulling the title.

If it's back to DVD. The blurays aren't burn on the demand though are they?

They are. Look for the "Made to Order" icon on the listing. For example:

Ah okay. I never go on the site since being Canadian, we're not worthy of purchasing from the Archives direct. we have to pay through the nose on third party sites.

Well, the only animated title so far is Young Justice, which means Looney Tunes would class up the joint.

Again its a double edged sword... The strictly chronological approach doesn't work for Warner Bros. because the first decade is at best pedestrian and worst absolutely godawful and would hardly sell. And the character specific method just seems to annoy the collectors market which is, unfortunately, all that's left anyway. So really its a no win for them outside BOD.

Made to Order is a stock logo for WA. So it doesn't automatically mean DVD-R for their DVD releases. They do most of their DVD sets as pressed discs for the initial run although very few have run out of the initial pressing. All of their Blu-Rays are pressed so far. From what I understand BD-R is not a possible option.

Cameron Yee said:
They are. Look for the "Made to Order" icon on the listing. For example:

It will be interesting to see what they do when the pressed BDs run out for a title. Are most thinking they will just make the title "out of print?"

I would think, since they've already created the 'mould/plates/stamp/pressing' (sorry, don't know the precise terminology) they would just press another small run.

My concern with the Archives is not disc format or release order, but restoration. Video quality has been outstanding since Golden Collection 1, minus the few missteps pointed out in this review. Will the Archives offer anything more than off-the-shelf quality? There's no way they'll give full digital restorations via that route, but there's no way I can go back to VHS expectations. Especially not for these timeless treasures.

Traveling Matt said:
My concern with the Archives is not disc format or release order, but restoration. Video quality has been outstanding since Golden Collection 1, minus the few missteps pointed out in this review. Will the Archives offer anything more than off-the-shelf quality? There's no way they'll give full digital restorations via that route, but there's no way I can go back to VHS expectations. Especially not for these timeless treasures.
Click to expand...

There's no guarantee about the future, but the Blu-rays which have been released through the Archive to date have been outstanding.

Thanks Richard, but the Looney Tunes released so far have all premiered via regular retail channels and thus are (mostly) full restorations, and in HD. We'd need to judge films originating from the Archive, though it's probably safe to maintain that they wouldn't be full cleanups.

Warner Archive blu-rays have had full restorations thus far. High quality standards equal to WHV. It's a different animal from the MODs.

With maybe a few exceptions WA has not used off the shelf copies for any of their Releases since 2011. They took the feedback they received seriously. Since 2012 they have been re-mastering nearly all their Movie, TV and Animation releases. If they are going to Re-master Obscure Hanna Barabera titles like Space Stars and Help Its the Hair Bear Bunch and Filmation titles like Gilligans Planet then why wouldn't they re-master Looney Tunes if WHV allows them to release them. They have been holding up several classic HB titles for a few years because of re-mastering issues and a desire to restore the Saturday morning shows to their original versions with all the connecting parts. Something they have done on a few releases already and something WHV would never do. I believe WA is starting to surpass WHV when it comes to quality presentations especially for lesser titles.

I'm not sure what degree of remastering Hanna Barbera titles either require or undertake, but back in the heyday, I recall Golden Collection restorations being reported at about $10,000 per seven-minute cartoon. One member here, ThadK I believe, not long ago reviewed some of the later Super Stars discs and reported that not even those were all proper restorations.I understand the points being made about WA and their habit of remastering titles, even for animation, but for now I'll remain skeptical as to how well the Looney Tunes would be treated. They're a special case, and should not be released without full digital restorations no matter the outlet.

It's a pity we couldn't have had a cartoon title card gallery for the TV broadcasts as an extra on one of the DVD or Blu-Ray sets. I've put together a gallery here. It is representative of the many different title card formats, but hardly comprehensive.http://kevinmccorrytv.webs.com/bbrrgallery.htmAdditional cards can be found here.http://kevinmccorrytv.webs.com/bbrr.htm
You must log in or register to reply here.

Jul 2, 2021
Dixon Smith
D
D
PRICES SLASHED ON ALL CLASSIC DVDs AND BLU-RAYs, INCLUDING CRITERION AND MASTERS OF CINEMA