One of the great pleasures of home video is the ability to pull up whenever one likes films that were star-making properties for certain actors. We can see, for example, Shirley Temple's first real splash in a feature film in Stand Up and Cheer or Mae West taking everyone by surprise in Night After Night. Though Freddie Bartholomew was probably the most famous of the male child stars of the mid-1930s and received top billing in Henry King's Lloyd’s of London, it was Tyrone Power whose startling good looks and undeniable on-screen charisma captivated audiences and which led 20th Century Fox to give a true star build-up to the actor. As for the film, it’s a rags-to-riches saga that holds one’s attention mainly through a powerful cast of leading and supporting players. The story is fairly predictable, but watching these A-list actors in a quality production march their way through these expected paces is still quite diverting. 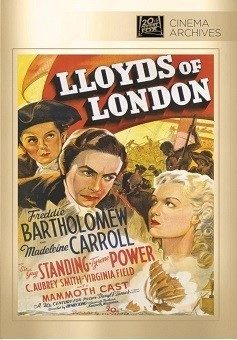 Learning of an upcoming scam to bilk the insurers at Lloyd’s Coffee House in London of thousands of pounds, young scalawag Jonathan Blake (Freddie Bartholomew) walks one hundred miles to London to report the upcoming swindle. Once he’s proven right, one of Lloyd’s underwriters John Julius Angerstein (Sir Guy Standing) takes a fatherly interest in the young boy and brings him on as an apprentice. Thirteen years pass and Jonathan (Tyrone Power), now a charismatic and enterprising young man, spearheads a series of ideas that brings power and prestige to Lloyd’s as London’s number one brokerage and insurance firm. When war breaks out with France, Lloyd’s bets heavily on Jonathan’s canny knack for predicting positive outcomes, based on his early childhood friendship with Horatio Nelson (Douglas Scott ) who has grown up to command His Majesty’s Fleet as Admiral Lord Nelson (John Burton). But Nelson begins suffering a series of defeats against the French which brings Lloyd’s to its knees, and it’s only through some crafty tricks of Jonathan’s that the firm stays afloat though that may soon come to an end due to Jonathan’s bitter romantic rival Lord Everett Stacy (George Sanders) who blackmailed Jonathan to buy into Lloyd’s once he caught Jonathan with Stacy’s wife (Madeleine Carroll).The success of Jonathan Blake’s professional life is contrasted quite obviously with the uneven nature of his personal life in the script by Ernest Pascal and Walter Ferris (based on a story by Curtis Kenyon). Jonathan juggles two women: the married Lady Elizabeth played by Madeleine Carroll and the infatuated, unfulfilled Polly (Virginia Field) who works at his brokerage. Both the personal and the professional sides of the plot are interesting though the Production Code demanded that Blake’s dalliance with a married woman (once he learns that she’s married) had to be handled off screen and only be suggested through subtext (the gorgeous Polly, who has a charming, ingratiating scene in a gambling club as she masquerades as a lady, gets cheated in the scenario; such a pretty, charming character deserved more elaboration). The rise-near fall-and rise again of the firm is quite expected with very little in the way of freshness, but tying it to the insurance of the fleet and the firm’s potential ruination should England lose the war against Napoleon does allow some action scenes of the war at sea to keep one’s attention. Director Henry King garbles some of the plotting here and there not always making it clear the firm’s position on matters large and small, but the big picture is clear enough. And though Jonathan Blake is a fictional compilation of several real-life young men, the story does have, in addition to the real-life John Julius Angerstein and Lord Admiral Nelson, a parade of famous real-life characters parading through it including Benjamin Franklin, Samuel Johnson, Boswell, the Marquis of Queensberry, and painter Sir Thomas Lawrence.Freddie Bartholomew appears only in the film’s first half hour as the plucky, sensitive young lad eager to do a good turn, and he’s as effective as always. While Tyrone Power likely isn’t any more believable as the adult version of Bartholomew as Mickey Rooney was growing up into Clark Gable in Manhattan Melodrama, on his own Power’s first star role (he’s billed fourth) finds him completely at ease in the romantic and earnest portions of the movie but a little stiff and inexperienced in some of the later, more dramatic turns of events (some of the film’s dialogue seems daunting for him), and his slight English accent comes and goes. Still, the camera loves him, and it's easy to see why he was such a hit in this movie. As the love interest of two men, Madeleine Carroll is lovely and lilting though actually no more so than Virginia Field’s Polly who, as mentioned earlier, doesn’t quite get her dramatic due. Sir Guy Standing is a wonderful surrogate father as Angerstein with audience sympathy remaining with him even when he and Jonathan find themselves on opposite sides of an insurance issue. George Sanders even in 1936 has his caddish persona down to a tee as the repulsive Lord Everett Stacy. C. Aubrey Smith has a couple of fun scenes as the randy Queensberry, and Una O'Connor squawks with the best of them early-on as Jonathan’s harsh aunt. Other very familiar studio contract players that give the film a most welcome sense of acquaintance are Gavin Muir, E. E. Clive, Miles Mander, Holmes Herbert, and Leonard Mudie.

The film’s theatrical 1.37:1 aspect ratio is faithfully presented here. There is plenty of grain on display especially in scenes with lesser contrast, but sharpness in general is quite good (except when approaching the end of each reel – noted by the reel change markers – where things sometimes turn alarmingly soft). The grayscale is above average with especially bright whites even though black levels vary more obviously. There are some slight scratches here and there, a few missing frames, and some occasional line twitter. The film has been divided into chapters every ten minutes so there are 12 chapters present here.

The Dolby Digital 2.0 sound mix is decoded by Dolby Prologic into the center channel. While dialogue is clear enough to be heard and doesn’t clash with the music and sound effects, there is modified hiss present through most of the film, and there are occasional pops and some muffled crackle as well.

Tyrone Power’s undeniable camera appeal comes through with blazing obviousness in Lloyd’s of London making his soon-in-the-making superstardom easily understandable. The film may seem a trifle long and extended, but the lushness of period detail and a sterling array of expert character actors make it a genuinely entertaining way to pass a couple of hours.

Glad they used a quality transfer for this. Not like there was much doubt for this particular title, but good news nonetheless.

I've always liked Tyrone Power but I've never realised that this film was his big break-through movie. I've never much liked the ever ice-cold Madeleine Carroll. I wonder if she warms up a bit in this film.

Robin9 said:
I've always liked Tyrone Power but I've never realised that this film was his big break-through movie. I've never much liked the ever ice-cold Madeleine Carroll. I wonder if she warms up a bit in this film.
Click to expand...

Well, she's married and virtuous, so she can't really turn up the heat much. I must say, if you couldn't tell from the review, I actually preferred Virginia Field and couldn't understand why Ty's character didn't see her as a love interest instead of just a pal once it became clear the woman he loved was married and unlikely to be divorced.

First as a star at any rate. Technically it was his cameo in Girl's Dormitory that garnered him enough attention as a potential matinee idol to get DFZ to try him out as the starring lead in Lloyds of London.


First as a star at any rate. Technically it was his cameo in Girl's Dormitory that garnered him enough attention as a potential matinee idol to get DFZ to try him out as the starring lead in Lloyds of London.
Click to expand...

Not really an error. While the publicity posters leave out the apostrophe, the actual title on-screen uses the apostrophe, so I had a decision to make which to use, and I used the way it's spelled in the title of the film on-screen.

Interesting to learn of the punctuation inconsistency Matt.
Don Ameche was originally slated for the leading role, but Henry King- one of Hollywood's unsung directors- championed Tyrone Power and thus helped him to become a star. He worked with him on many occasions after this (CAPTAIN FROM CASTILE, PRINCE OF FOXES, JESSE JAMES, KING OF THE KHYBER RIFLES).
Although made in 1936, according to the imdb, it premiered at the Cathay Circle theater in Los Angeles in January 1937. It was nominated in the Best Art Direction and Best Film Editing categories at the 1937 Academy awards ceremony for 1936 productions, and up for the Mussolini Cup for Best Foreign film at the Venice Film Festival in 1937. (I'm guessing the name of this award was swiftly changed in the war era!)
On the disc of THE BLACK ROSE in the first Tyrone Power set (produced back in the days when Fox treated their classic titles with great respect and care), there is a fascinating featurette with the late Linda Christian (Power's second wife) and three of his four children. One is Tyrone Power (IV), born after his father's sudden death on the location set of SOLOMON AND SHEBA (after many takes of a sword-fight scene with George Sanders), who looks a good deal like his father and was in some movies (eg. both COCOON movies and a regular role on THE BOLD AND THE BEAUTIFUL). By the way, longshots of Tyrone Power can still be seen in SOLOMON AND SHEBA, one of the few Yul Brynner movies in which he sports hair, which King Vidor felt was a lesser film without Power.
I have read that one of Fox's cameramen said that Power was the only actor he ever photographed who did not have one bad angle.

Amen to Power's good looks. His long eyelashes never cease to amaze me.
Anyway, I was fortunate to see Fox's glorious 35mm archive prints of the above mentioned films directed by Henry King (indeed unsung), and watching them now, in unrestored, faded contrast or color prints, makes me weep.
I'll stick to my happy memories.

I'm not sure I was even aware that Freddie Bartholomew was considered the lead in this movie! I always considered it a Tyrone Power film. Bartholomew also gets a prominent place in the 1935 Garbo version of Anna Karenina, even though Anna's son is a very minor character in the novel.

Billing is often based on one's status as a star and one's recent successes at the Box Office. Tyrone Power is certainly the lead but it was his first major role. Contractually, Freddie's agent (or MGM, who was no doubt loaning him to Fox) would have insisted on top billing due to his recent successes (eg. DAVID COPPERFIELD)
You must log in or register to reply here.