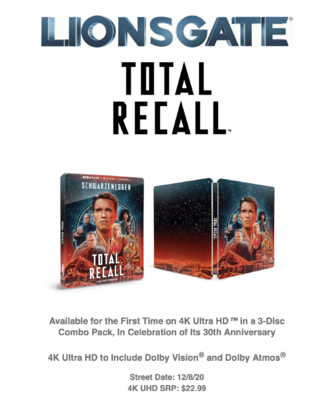 Undertaken by STUDIOCANAL, the restoration was supervised by Paul Verhoeven himself. The restoration crew paid particularly high attention to preserving special-effects continuity, as Total Recall was one of the earliest films to use computer-generated images for special effects winning the Special Achievement Award for Visual Effects at the 1990 Academy Awards®.

Available for the very first time in this absolutely stunning format, the Total Recall 4K Ultra HD Combo Pack will include a never-before-seen exclusive documentary feature as well as two brand-new featurettes. Experience four times the resolution of full HD with the 4K Ultra HD Combo Pack, which includes Dolby Vision, bringing entertainment to life through ultra-vivid picture quality. When compared to a standard picture, Dolby Vision can deliver spectacular colors never before seen on a screen, highlights that are up to 40 times brighter, and blacks that are 10 times darker. Additionally, the 4K Ultra HD Combo Pack features Dolby Atmos, which will transport viewers from an ordinary moment into an extraordinary experience with moving audio that flows all around them. Fans will feel like they’re inside the action as the sounds of people, places, things, and music come alive with breathtaking realism and move throughout the space.

The Total Recall 4K Ultra HD Combo Pack will be available for the suggested retail price of $22.99.

OFFICIAL SYNOPSIS
Fully reimagined in stunning 4K for its 30th anniversary — and remastered in Dolby Vision and Dolby Atmos — Paul Verhoeven’s out-of-this-world sci-ﬁ thrill ride can now be experienced like never before! In this splintered-reality mind-bender, it’s the year 2084, and construction worker Quaid (Schwarzenegger) is haunted by dreams of Mars, a place he’s never been. Against his wife’s (Sharon Stone) wishes, Quaid goes to Rekall, a memory-implant company that promises a thrilling virtual trip to the red planet. But what Quaid “remembers” is that he’s a secret agent whose cover has been blown…and that he must return to Mars at any cost.

I can only hope the iTunes HD digital I purchased in July, upgrades to 4K later this year.

Hopefully there will be a non-Steelbook version, I assume?

StarDestroyer52 said:
Hopefully there will be a non-Steelbook version, I assume?
Click to expand...

Not at that MSRP. Initially, I misunderstood your comment, I think this Steelbook is it.

Okay, I see why I'm not crazy for Steelbooks I'll be grabbing this version. Wanted to see if there would be a non-Steelbook version since maybe its just me but I always have the hardest time getting the discs out of them. The MSRP is affordable enough there and I guess I can get an replacement case or something.

I wonder how much of it is going to be Bruce bashing the Munich Symphony Orchestra.

For those interested, the score to "Total Recall" started recording in Munich. Sessions didn't go well, as the musicians were having difficulty with the music. Only two cues (the main title and "The Aftermath) were used in the film from these sessions. There were numerous attempts to record "Clever Girl" and eventually the decision was made to move scoring to London with the National Philharmonic Orchestra. Scoring was completed there without incident.

In 2015 I produced an expanded release of the score for Quartet Records and edited together a performance of "Clever Girl" from the German sessions.

I don't like a lot of packaging, no disc needs a steel box.

So weird. I randomly started watching this yesterday and wondered if a 4K would be upcoming. Great news.

I just hope we get a 4K iTunes upgrade on this. However, since it's Lionsgate releasing the disc, who knows unless the rights to the streaming version of the film lie with someone else.

$23 for a 4K of a movie I want, that’s not bad. I expected a higher price. It doesn’t look like any of the extras are new, but the 4K has the commentary on it and DOLBY ATMOS. Hot spit! I’m in.

"Available for the very first time in this absolutely stunning format, the Total Recall 4K Ultra HD Combo Pack will include a never-before-seen exclusive documentary feature as well as two brand-new featurettes."

I dislike the steelbooks (too hard to remove the disc from the spindle without bending the disc), but I might have to pick this one up. Hopefully the 4K will do the film’s colors justice.

Well, I ended up getting this from BestBuy. Paid about $23, hopefully Basic Instinct is next before the end of the year.

Is this a BB exclusive?

Johnny Angell said:
Is this a BB exclusive?
Click to expand...

It's not mentioned in that press release so I'm assuming it's not.

StarDestroyer52 said:
Well, I ended up getting this from BestBuy. Paid about $23, hopefully Basic Instinct is next before the end of the year.
Click to expand...

...With an Ice Pick so you can get the disc out of the steelbook