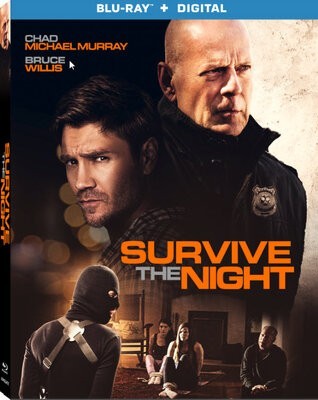 From an executive producer of Live Free or Die Hard and A Good Day to Die Hard comes the tense home invasion thriller with shocking twists Survive the Night, arriving on Blu-ray™ (plus Digital) and DVD July 21 from Lionsgate. This film is currently available On Demand.

Chad Michael Murray and Golden Globe® and Primetime Emmy® winner Bruce Willis (Golden Globe®: 1987, Best Actor – Television Series, “Moonlighting”; Primetime Emmy®: 2000, Best Guest Actor, “Friends”) star in this film about a disgraced doctor (Murray) and his family who are held hostage at their home by criminals seeking immediate medical attention, on the run from a robbery gone awry. The Survive the Night Blu-ray and DVD will be available for the suggested retail price of $21.99 and $19.98, respectively.​
OFFICIAL SYNOPSIS ​
Screen legend Bruce Willis (Die Hard franchise) drives the action in this gripping home-invasion thriller. After two brothers commit a robbery that goes wrong, one of them, Mathias, is mortally wounded, forcing sibling Jamie to stalk a trauma doctor named Rich (Chad Michael Murray, “One Tree Hill”) from the hospital to his home. While holding Rich’s wife and daughter hostage, Jamie forces Rich to operate on Mathias. For the family to survive the night, Rich must team up with his estranged tough-as-nails father, retired sheriﬀ Frank (Willis), in order to gain the upper hand and turn the tables on the criminals.​
​
You must log in or register to reply here.