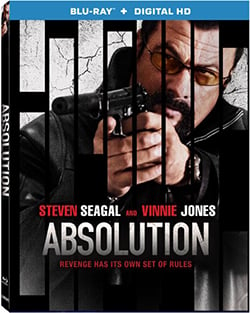 Action icon Steven Seagal stars in Absolution, arriving on Blu-ray™ (plus Digital HD), DVD (plus Digital) and Digital HD July 7 from Lionsgate Home Entertainment. The film is currently available via On Demand. Byron Mann (TV's "Arrow"), UFC Heavyweight Champion Josh Barnett and Vinnie Jones (X-Men: The Last Stand), bring the heat in this action-packed adventure directed by Keoni Waxman (Maximum Conviction). With bonus material including a "making of" featurette, an audio commentary and behind-the-scenes interviews with the cast, the Absolution Blu-ray and DVD will be available for the suggested retail price of $19.99 and $19.98, respectively.

When a contract killer (Seagal) encounters a girl on the run from a mob boss (Jones) with powerful political ties, he is torn between protecting the girl, and remaining loyal to the government agency that hired him for the mission.

Steven Seagal - A Good Man, Maximum Conviction, Under Siege, Above the Law

Rating: R for strong violence, language and some drug use