Roger Ebert was undeniably one of the most influential writers of the 20th century, forever changing the way we discussed and appreciated movies. Director Steve James (Hoop Dreams) takes Ebert’s memoir Life Itself as the starting point of his documentary on the late film critic’s life, warts and all. 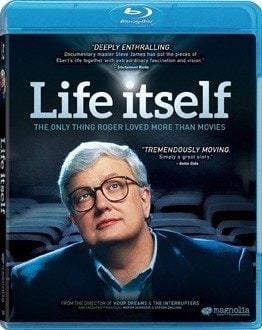 One of my fondest movie-going experiences was seeing Apocalypse Now in 70mm at the Cinerama Dome in Hollywood during the theater’s 25th anniversary celebration in 1988. I had seen the movie before on VHS, but this was my first time experiencing it on a large screen with surround sound. But what made the experience even more special was having Roger Ebert seated behind me, occasionally providing a running commentary to the person seated next to him. It was fascinating to hear him provide tidbits of trivia or comment on a performance, but it was never distracting or intrusive, and everyone within earshot didn’t seem to mind.

When Steve James decided to make a documentary from Ebert’s autobiography, Life Itself, he had likely envisioned a much different film, one that showed a man who managed to overcome addictions and major health issues and come out stronger than ever. That was not to be the case, as Ebert found himself admitted to the hospital for a hairline fracture to his hip just as James was about to begin shooting, sidelining him for several weeks, and eventually uncovering metastasized tumors along his spine that would ultimately take his life four months later. The film, Life Itself, follows Ebert’s life, and would become the final chapters of Ebert’s book.

The film begins with Ebert in the hospital, a man who, despite his health issues, has enormous humor, passion, and courage, all while his family and friends help to take care of his everyday needs. We then begin to see, through old photos, home movies, archival clips, and excerpts from his book read by Stephen Stanton, a young man who loved the written word, publishing his own neighborhood newspaper, leading to editing the University newspaper, and eventually to the film critic position at the Chicago Sun-Times. Along the way, he would write the screenplay for Russ Meyer’s Beyond the Valley of the Dolls, as well as several books, and getting paired with rival Chicago Tribune film critic Gene Siskel on a locally produced PBS show called Opening Soon (which would be retitled Sneak Previews when PBS took the show national).

James was given almost complete access to Ebert and his wife Chaz, and the result is a fascinating and bittersweet documentary, warts and all, of a man and his journey through life, with help from interviews with colleagues, fellow film critics (including Richard Corliss, who wrote a scathing essay on Siskel and Ebert’s “Thumbs Up/Down” rating system for Film Comment), and filmmakers (the best-known being Martin Scorsese, whom Ebert more or less “discovered” almost 15 years before naming Raging Bull one of the best films of the 1980s). Much of the film’s humor comes from the butting of heads by Siskel and Ebert in not only clips from their various movie review series, but outtakes from those shows, as well. And to give a better insight into that relationship, James includes interviews with Siskel’s widow, Marlene Iglitzen, revealing what we all thought all along, that it may have started out as volatile, but became more of a sibling rivalry, with Siskel being the older brother Ebert never had.

Magnolia Home Entertainment’s 1080p transfer is about as good as this film is likely to look, utilizing a relatively high bitrate AVC encode. All of the new footage shot specifically for the film looks great, with deep blacks and consistent colors, with no anomalies such as interlacing issues or compression artifacts. The archival footage is what it is, mostly taken from heavily duped standard definition analog video, but still looks quite good.

Life Itself is essentially nothing more than people talking to the camera or each other, and the DTS-HD Master Audio 5.1 track reproduces that dialogue very clearly and directs it mostly to the center channel, using the surrounds to enhance the music tracks by composer Joshua Abrams.

Deleted Scenes (1080p; 22:23): A total of 15 scenes are included, obviously cut for time, have not been timed or color corrected, so may appear to have a haze to them. The one deleted scene to definitely check out is Johnny Walker, which is reminiscent of a joke with a long-delayed punch line.

Sundance Tribute (1080p; 6:54): Using some of the best interview clips from the movie, this short piece was shown at Sundance when Ebert received the Vanguard Award in June 2013. The clips here have also not been timed or corrected.

Interview with Steve James (1080p; 10:41): James essentially interviews himself, talking directly into the camera about his experiences making the movie.

AXS TV: A Look at Life Itself (1080p; 2:22): The theatrical trailer interspersed with interviews of Steve James and Chaz Ebert.

BD-Live: It’s hard to believe some titles still include this feature, but when activated, returns with the message “Check Back For Updates.”

Anyone who loves movies should add this to their list of films to see, and, frankly, I’m surprised Life Itself was overlooked as a nominee for Best Documentary at this year’s Oscars, especially since it was Siskel and Ebert who had lobbied for a change in the motion picture academy’s rules for nominating and voting in this category after they felt too many good films were overlooked and the films that won were “too safe.” Highly Recommended!!

Living in the Chicago area my whole life i did every Friday buy the Suntimes newspaper just to read his reviews and sometimes Gene's too at the Tribune and then watch the show they both had here on our local PBS station. I did talk to him once on a local radio show asking him why Citizen Kane was voted the best pic ever made so i have lots of good memories of him. Saw the documentary when it was broadcast on CNN last week and liked it alot with lots of unseen footage of Roger and Gene together so this is a must buy for me.


I'm looking forward to seeing this.

Also, another must buy for me.


I had the opportunity of chatting with Roger Ebert online one time, and he included our discussion as one of the entries in his Little Movie Glossary book. The only thing being that in the published book he states my name as Raul Marquez, Maryland where on our chat I signed as Raul Marquez, MD (the doctor title) I still get a laugh out of that one.


I have read most of his books and even though I disagree with some of his choices for Great Movies, I can still understand why he included them in his books.


I also saw this documentary on CNN and I knew I had to buy it. Unfortunately Best Buy decided not to sell it locally and I had to order it from Amazon.

Exceptional documentary. A must see! Thank you, Todd, for this wonderful review.
A

I really enjoyed this. Siskel and Ebert meant a lot to me. I started watching them as a kid in the 80s and contrary to what other critics thought (as noted in the film), they didn't dumb down film critique for the masses, they helped open the eyes of film goers to different movies and different ways at looking at movies.

Raul Marquez said:
Also, another must buy for me.


I had the opportunity of chatting with Roger Ebert online one time, and he included our discussion as one of the entries in his Little Movie Glossary book. The only thing being that in the published book he states my name as Raul Marquez, Maryland where on our chat I signed as Raul Marquez, MD (the doctor title) I still get a laugh out of that one.
Click to expand...

I too used to chat with Roger online, back in the days when he had a forum on Compuserve. My claim to fame is that he mentioned me in his review of Copland way back in 1997.

Richard Gallagher said:
I too used to chat with Roger online, back in the days when he had a forum on Compuserve. My claim to fame is that he mentioned me in his review of Copland way back in 1997.

Hi Richard (long time no see.... since we met at the airport on the return trip from the last HTF meet!),


Yes, I also chatted with him on CompuServe. Also with Dean Devlin who ended up producing Independece Day.


BTW, On CompuServe is where I first met Robert A. Fowkes (RAF)

This is a birthday buy for me!!!!!
You must log in or register to reply here.