You could be forgiven for never having heard of Les Blank. As much as the subjects he chose to explore, he and his films largely exist on the periphery of celebrated American film works. Though as you watch any one of the fourteen films restored and presented here, don’t be surprised if a smile grows across your face as there is a joy and an unbridled lack of inhibition in the subjects as they celebrate their place in this world. Criterion’s work here, presenting in fine quality, a collection of exceptional films by the late Les Blank, is top-notch. 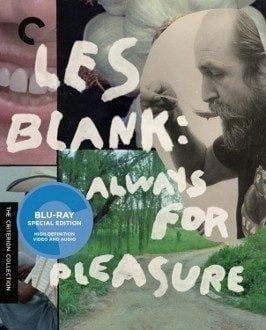 “Cook and wash, and work in the garden, and feed the hogs and chickens, turkey, work the flowers too.”

Les Blank saw himself, not as a documentarian, but rather a filmmaker whose subjects happened to be “real people.” After forming his own production company, Flower Films, in 1967 (now called Les Blank Films,) he sought to explore the periphery of so-called mainstream American life, finding slices of rich, textured, affecting humanity – subjects often off the beaten path – and captured them with a loving curiosity. Rarely seeking to explore the why or how, Blank used the camera to examine the ‘what,’ nudging an unexpected reality and rawness of lives, cultures, moments, and delicacies from hundreds of smiling and sad faces, celebrating their pulsing, beating heart of humanity. He gave voice and image to areas of the American landscape forgotten, ignored, or simply otherwise undiscovered by film – and for that, as lovers of film – we are indebted.Throughout his life, Les Blank filmed almost forty documentaries and short-films. Of those, Criterion has assembled and restored a marvelous collection of fourteen films that show-off his wide-ranging curiosity, and yet still capture the threads and themes that connect each of his productions. Included here are The Blues Accordin’ to Lightnin’ Hopkins (1968,) God Respects Us When We Work, but Loves Us When We Dance (1968,) Spend It All (1971,) A Well Spent Life (1971,) Dry Wood (1973,) Hot Pepper (1973,) Always for Pleasure (1978,) Garlic Is as Good as Ten Mothers (1980,) Sprout Wings and Fly (1983,) In Heaven There Is No Beer? (1984,) Gap-Toothed Women (1987,) Yum, Yum, Yum! A Taste of Cajun and Creole Cooking (1990,) The Maestro: King of the Cowboy Artists (1994,) Sworn to the Drum: A Tribute to Francisco Aguabella (1995.)The fourteen films on offer are connected by culture and music, and while each captures a unique element of life, in a corner or field of America, Blank’s connection to the American southeast, the vibrant side of Louisiana – the music, the food, the Acadian (Cajun,) people – is something he returns to time and again. Idiosyncratic is word often used to describe the subjects of his films, and that’s a perfectly apt descriptor. Everything from the cultural symbolism of women with gaps in their front teeth (Gap-Toothed Women,) to the adoring fans of Garlic and its use across cultures in cooking (Garlic Is as Good as Ten Mothers,) is happily explored. With other subjects that include Polish American Polka music (In Heaven There Is No Beer?) and the rhinestone suite clad singing cowboy (The Maestro: King of the Cowboy Artists,) making this collection absorbing, unglamorous, and beautifully rich with life.A visual essayist, interested in letting the sights and sounds of any moment – including impromptu jam sessions, where the beaten sounds of the blues flow supernaturally from wood, strings, fingers and soul, or where the free-flowing bow against fiddle playfully set toes-a-tapping – Les Blank was one of the most honest, unrestrained makers of film about people. Through a collage of images, the occasional story told on camera, fleeting question and answers that might strike a more traditional documentary film feel, Blank’s productions document moments in time, and watching them is a walk through history itself.

Each of the fourteen films is presented in their original 1.33:1 aspect ratios, in new digital transfers created in 2K resolution. Dust, debris, scratches and other issues have been largely removed, though some flaws remain in a few shots – these, however, are fleeting. Starting with the first film, the oldest of the collection (The Blues Accordin’ to Lightnin’ Hopkins,) it is clear that the level of detail is going to shine. Though filmed with modest means, naturally lit, the films exhibit a wonderful grain structure, appropriate levels of detail, and while the colors may appear somewhat muted, especially in the earlier works, some of that can be attributed to the year, location, and conditions.

Criterion provides a pleasing, of not thoroughly examining collection of special features, the highlight of which is the collection of seven short-films, further capturing the legacy of this unique filmmaker. Once again, the accompanying booklet containing another fine essay, this time by film scholar Andrew Horton, is welcome.Excerpt from Les Blank: A Quiet Revelation, an upcoming documentary by Gina LeibrechtNew interviews with director Les Blank’s sons, Harrod and Beau; Blank documentary subject Gerald Gaxiola (a.k.a. the Maestro); filmmakers Skip Gerson, Maureen Gosling, Taylor Hackford, Tom Luddy, and Chris Simon; and chef and author Alice WatersBlank’s short films:-Lightnin’ Les (1968)-Mr. Charlie, Your Rollin’ Mill Is Burnin’ Down (1968)-The Sun’s Gonna Shine (1968)-More Fess (1978)-Julie: Old Time Tales of the Blue Ridge (1991)-My Old Fiddle: A Visit with Tommy Jarrell in the Blue Ridge (1995)-The Maestro Rides Again (2005)Booklet with descriptions of each film and an essay by film scholar Andrew Horton

Wholly absent expressions of cynicism, criticism, praise, or ignorance, this collection of Les Blank films shows off this filmmaker’s marvelous fascination with people, music, culture, and their chemistry when combined. Stripped of boundaries, uninhibited by expectation, and unconcerned with standard documentary form, the result is a fascinating journey into humanity that I encourage you to take.

Great to read this seeing as I just blind bought the set on the B&N sale. I'm one of those weirdos who enjoys documentaries yet am completely unfamiliar with Les Blank. I'm nearly done Criterion's massive Zatoichi set, so I think I'll start spinning these once a week in Zatoichi's place.

Thanks again for the review!

Russell G said:
Great to read this seeing as I just blind bought the set on the B&N sale. I'm one of those weirdos who enjoys documentaries yet am completely unfamiliar with Les Blank. I'm nearly done Criterion's massive Zatoichi set, so I think I'll start spinning these once a week in Zatoichi's place.

You are most welcome. I think you will be pleased with the set. I must say that there were a couple of moments (during Spend it All,) that I had to look away as they killed a pig for a feast (perfectly reasonable, but I just don't have the stomach for it.) But your constitution for such things may be less wobbly than mine
You must log in or register to reply here.