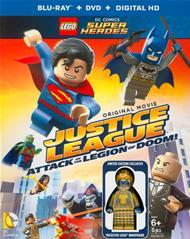 This new Lego film is designed for all ages, with just enough to keep older audience members engaged. The heroes (and villains) regularly crack wise with each other, with Flash and Green Lantern having an especially silly rivalry ongoing between them. Superman's boy scout reputation is similarly played tongue in cheek in his interactions with Batman. Screenwriter James Krieg(Justice League: The Flashpoint Paradox) knows these characters and their mythology intimately, and his familiarity with this world shows on screen in the entertaining script that draws from and pays homage to the original Superfriends TV series.

Justice League: Attack of the Legion of Doom! is presented in a 1.78:1 aspect ratio in 1080p with the AVC codec. Image quality is very fine with the computer generated animation served well with rich colors and good contrast on the computer models and backgrounds.

The English DTS-HD MA 5.1 is a very nice mix with the dialogue, music, and effects blended well. The voice acting is very good, and the actors' efforts are served well with dialogue always presented audibly in the mix.

Special features include trailers for Justice League v. Bizarro League(1:35) and Batman Unlimited: Monster Mayhem(1:43), and the featurette "Click, Zap, Boom! Creating the Sound Design"(19:51) which features the director and Foley artists discussing creative choices for use of sound effects in the film.

DC Comics Super Heroes - Justice League: Attack of the Legion of Doom! is an entertaining film that skews towards a younger audience but delivers enough to engage all ages. The video and audio presentation are very good, but there is little in the way of special features to supplement this release. This film will be particularly enjoyable for younger superhero fans but will also be of interest to devout super hero fans of an older age.

Watched this last night. Good, silly fun.
You must log in or register to reply here.