The fourth season of the bonkers, timewarping DC ensemble series will premiere Monday, Oct. 22 at 9/8c on The CW. 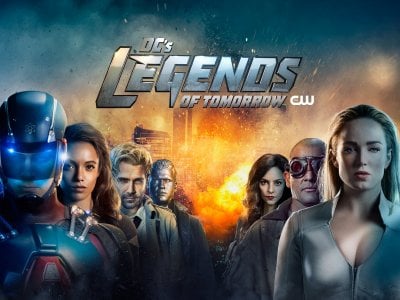 ​
The third season ended with a giant talking stuffed animal -- conjured by the combined power of the Zambesi totems -- to destroying the evil time demon Mallus. The final confrontation was only possible because Rip Hunter sacrificed himself to buy the Legends time, and Damien Darhk sacrificed himself to save his daughter's soul. Having completed their mission, Amaya decided she could no longer put off returning to 1942 and her destiny. The plan had been for Nate to wipe her memory, but she decides that she can't bear not to remember, since the memories are all that she'd have left of him. The lovers part with a kiss, and Nate returns to the Waverider. Him and the rest of the remaining crew finally get that vacation in Aruba. But before they get a chance to relax, John Constantine drops a severed demon head on the stand in front of them. It turns out that when Mallus escaped his time prison, he wasn't the only supernatural threat to take advantage of the opening into Earth-1.

Brandon Routh, Caity Lotz, Amy Pemberton, Tala Ashe, Nick Zano and Dominic Purcell are all returning as series regulars. Maisie Richardson-Sellers is also returning as a series regular, but will be playing a new character named Charlie, a doppelganger from another dimension who slipped through the same rift as the demons.

Jes Macallan, who recurred last season as Time Bureau chief and factory-issued clone Ava Sharpe, has been promoted to series regular. She is not joining the Waverider but rather continuing to run the Time Bureau from a new "West Wing in space" set. Courtney Ford, who recurred last season as Damien Darhk's demon-possessed daughter Eleanor "Nora" Darhk, has also been promoted to series regular.

Keiynan Lonsdale will not be returning as a series regular for Season 4, but will appear in the fifth season premiere of "The Flash".

After sharing showrunner duties with Marc Guggenheim for the first three season, Phil Klemmer will serve as sole showrunner for the fourth season.

Joining the team this go-round will be:
Also cast for the new season:
Sara deals with the fallout of her father's death in the season finale of "Arrow" between the "Legends" third season finale and fourth season premiere. It will be be referenced on this show, but she'll have already done the bulk of her grieving when the new season begins. The upcoming season will feature more Beebo, more Gary, Woodstock, the Beatles, and a unicorn.

"Legends of Tomorrow" will not be one of the participating shows in this year's crossover event.

No crossover. Good news! (I’ll only be watching LoT, and that’s a maybe, of the CW DC shows.)
Expand signature
Unique shirts, mugs, and more that celebrate board games (and more) with a typographic slant

DaveF said:
No crossover. Good news! (I’ll only be watching LoT, and that’s a maybe, of the CW DC shows.)
Click to expand...

In this interview with TVLine, Caity Lotz confirms that "Legends" isn't participating in the crossover because it has too large of an ensemble, the logistics are nightmare, and when you add in the characters from 2-3 other shows there isn't the opportunity to do good character work with the Legends themselves.
Reactions: DaveF

It was apparent during the last crossover when only a few of the Legends went to Barry and Iris's wedding that there were too many characters in the crossover. Hopefully what Caity also said about maybe one or two characters from the other shows visit the Legends.

FAN: Hi, my name is Gavin, and if you guys could be any other superhero, which one would you be?

Also, I just redeemed the digital copy that came with the Blu-Ray of Season 3, and the new series poster on Vudu is EVERYTHING: Great trailer. Really has me hyped for this season.

Always so much crazy fun.

A delightful season premiere. Their individual hippy garb made me laugh out loud. They did look like costumes (too clean) though I remember lots of clothes at the time just as outrageous, just not so brand new looking.

"Did Constantine get you to squeal?"
"I wish."

This is the most delightful show on television right now, and I missed it so, so much.

Back to the Future is probably the most culturally-pervasive time travel movie there is, so getting the guy who played Biff Tannen to play Nate's asshole father was a brilliant bit of casting. And if you've seen some of Thomas F. Wilson's other work, you know how gifted of a comedic performer he is.

"Supergirl" is saturated with political commentary right now, and very little of it works. I get the sense that the writers on that show want to be relevant, but haven't quite settled on what they want to say. By contrast, this episode had exactly one moment of political commentary. And it was pointed, and it was poignant, and it was deeply personal. And it spoke volumes about Zari’s relationship with Ray that she trusted him enough to share something so vulnerable.

The introduction of Constantine as a full-time presence sharpens the already abrupt tonal shifts. The show brings him into a lighter space that we usually see for the character, but when he's alone he brings the show to a darker space than we usually see. That stinger at the end with his body being contorted and the bloody message on the mirror could have been straight out of the character's NBC series. And this show, so far, has done a much better job of portraying him as a smoker without actually showing it.

He also adds a destabilizing element to the Sara/Ava relationship that makes it more interesting. Just when I'm getting bored because things are getting a little too domestic, there are dancing knuckle bones on the kitchen counter.
Reactions: holtge

Had some good laughs tonight with the fairy godmother and Salem witch trials. Not sure the resolution was completely satisfying (I thought the mother HAD to die to fulfill actual history), but seeing Ray turn back from a pig was worth tuning in for. Love this show's sense of the absurd.

Matt Hough said:
Had some good laughs tonight with the fairy godmother
Click to expand...

They're doing a good job teasing whatever happened to Constantine between seasons. It must be quite a threat that the fairy godmother would rather be sent to hell than risk its wrath.

Not sure the resolution was completely satisfying (I thought the mother HAD to die to fulfill actual history)
Click to expand...

The show did a clever there. Jane Hawthorne was not one of the fourteen women and six men executed for witchcraft during the Salem Witch Trials. So by changing history, they actually made it conform more closely to real history.

but seeing Ray turn back from a pig was worth tuning in for.
Click to expand...

My one hesitation with this season so far is that it looks like Nate's going to off with Ava on Time Bureau subplots instead of taking part in the craziness aboard the Waverider. Seeing how much bro chemistry he has with Ray in even pig form, I'll hate not having him in the mix with the Legends as much, especially since:

Love this show's sense of the absurd.
Click to expand...

My favorite bit in the whole episode was Mick chafing at Constantine's blatant lack of courtesy around the Waverider.

Was it my imagination, or as the villagers were taking down the scaffold, did I see someone carrying coconuts (and hear a clomping sound)?

Yeah, "bonkers" is a great way to describe this show, and it's great. Despite the craziness in each episode, each character gets their moment and that's what connects with audiences. I can't think of another show that's this much fun to watch every week.
Expand signature

I don't have time enough to watch all these DVDs!
Reactions: holtge and David Weicker

I was amused that Ray Palmer was turn into a pig.
Brandon Routh was born and raised in Iowa, the leader pork producer of the USA.

"Hold on a minute, there's your magic man right there. Obsessed with riches, given to mischief, that Irishman there's a leprechaun."
"So sorry, are you being serious or racist?"
"Both, love."

This show is just so much fun. I was worried about Nate being stripped of what made him interesting at the Time Bureau, but he's just brought the Legends' flair for disorder to the Bureau.

They've gotten a lot of mileage out of Gary's missing nipple, but I'm still loving it.

The first time I encountered Maisie Richardson-Sellers was on "The Originals", the CW's gothic soap opera. Claire Holt, the actress who originated the role of Rebekah Mikaelson -- the world's oldest female vampire -- was unavailable, so the writers came up with a plot whereby her soul possessed the body of an evil voodoo witch. Holt was great in that role, so Richardson-Sellers had big shoes to fill. But she did brilliantly.

After a character so dramatic and wounded and brutal and bitterly funny, Amaya seemed so constrained, so buttoned-up. I grew to love that character too, but I missed seeing her really just tear through a scene. Charlie possesses many of the qualities that made Rebekah Mikaelson so interesting to watch, and I can't wait to see what Richardson-Sellers does with the character.

For "Doctor Who" fans, it was fun seeing Rani from "The Sarah Jane Adventures" all grown up as this episode's iteration of Charlie.

Yes, a very fun episode. Square Ray trying to be down and dirty is always good for lots of laughs, and the camaraderie these actors have with one another is just so fresh and invigorating. The hour usually seems to fly by. Last night's certainly did.

Loved the UK Punk scene setting. It was inspired.

Not sure I love that Maisie Sellers-Richardson is going to be playing a different character this season. Do we know for sure that Amaya isn't coming back?
Expand signature

I don't have time enough to watch all these DVDs!
You must log in or register to reply here.