The third season of the timewarping DC ensemble series will premiere Tuesday, Oct. 10 at 9/8c on The CW.

The second season ended with the crew of the Waverider breaking a cardinal rule of time travel -- don't cross your own timeline -- to stop the Legion of Doom and restore the original flow of history. After restoring the timeline (and resisting the impulse to bring her sister back to life), Sara depowered the Spear of Destiny. The Black Flash finally caught up with the time remnant of Eobard Thawne and erased him from existence. Having saved the day, the Legends erased the events of the second season from the memories of Leonard Snart and Damien Darhk and returned them to the exact moments in history that Thawne had snatched them from. Rip Hunter departed the Waverider to follow his own agenda. The remaining crew decides to celebrate their hard-earned victory with a vacation in Aruba. But before they get there, the time stream destabilizes and the Waverider violently crashes in present day Los Angeles, which is littered with animals and buildings from the distant past and future. Having broken Rip's rules of time travel, the crew was left with the daunting conclusion that they had broken time.

Arthur Darvill will no longer be a series regular, but he will recur throughout the third season. Wentworth Miller will also be back for a few episodes, but it will be a different iteration of his character.

Joining the team this go-round will be:
Also cast for the new season:
Kuasa, Amaya's great-granddaughter and the sister of the 2017 Vixen, will be one of the villains of the third season. There have also been tentative discussion about Matt Ryan appearing as John Constantine at some point this year, schedule permitting. Sara was bisexual on "Arrow", but has been pretty much exclusively involved with women on "Legends". Her bisexuality is something that the writers want to reestablish this season.

Tracy Ifeachor will play Kuasa, the sister of Mari McCabe (the 2017 Vixen) and the granddaughter of Amaya (the "Legends" Vixen), Entertainment Weekly reports. The role was voiced by Anika Noni Rose in the "Vixen" animated series.

Grodd to menace the Legends team.

For anybody interested in seeing the adventures of Amaya's granddaughter in the present day, The CW is airing the "Vixen" animated serial in a two-hour block this Wednesday:

The 2017-18 crossover event will be entitled “Crisis on Earth-X”. Unlike last year's crossover, which only featured a brief scene at the tail-end of the "Supergirl" episode, which was then mostly repeated on "The Flash", this will be a true four-way crossover telling one story over four episodes on two nights.

"Last year, it was like, you know, Flash showed up on 'Supergirl' and then it was an episode of 'The Flash', an episode of 'Arrow', and an episode of 'Legends'," Stephen Amell told audiences at the Salt Lake Comic Con. "But this year is just a four-hour movie."


While heroes from the four CW shows are gathered for the wedding of Barry Allen and Iris West, the Reichsmen from Earth-X crash the festivities with a deadly agenda. Earth-X, which will be featured in the upcoming animated CW Seed series "Freedom Fighters: The Ray", is another Earth where Nazi Germany won World War II. Between Earth-1 and Earth-38 in the multiverse, it features twisted doppelgangers of heroes from both Earths. These include Overgirl (a doppelganger of Supergirl), Blitzen (a doppelganger of The Flash) and a dark doppelganger of Green Arrow. Joining the side of good will be a new superhero, The Ray, played by Russell Tovey, who will also voice the character in the animated series.
“We conceived this year’s crossover to be evocative of the annual Justice League/Justice Society crossovers we grew up with and looked forward to as kids,” said executive producers Marc Guggenheim and Andrew Kreisberg in a statement. 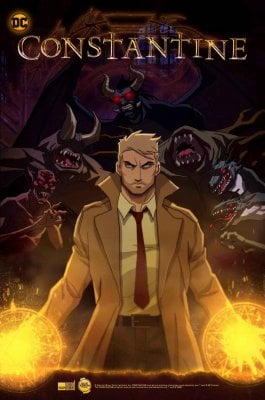 John Constantine will appear in third season of "Legends of Tomorrow"

It's an absolute joy to have this show back. I loved this episode from beginning to end.

Really enjoyed tonight's episode. Not because it's great TV or anything, but it's just plain fun. And you know what, that's ok and enough for me.
Reactions: Richard V and JohnS

DavidJ said:
Really enjoyed tonight's episode. Not because it's great TV or anything, but it's just plain fun. And you know what, that's ok and enough for me.
Click to expand...

Yes, a lot of fun. The show knows what it is and doesn't hide it. "Sometimes we screw things up for the better" - now that's a motto.

Had a smile on my face and multiple chuckles from beginning to end. They have hit exactly the right note with this show, and I'm beginning to like it better than the other CW DC Universe shows. Mick Rory is the glue that holds this show together. At first I thought the producers had made the wrong choice by keeping Mick over Leonard, but I was totally wrong. Mick is by far the more fun character, although Leonard is the more complex one.
Expand signature
Yeah, well like, that's just your opinion, man.

I just read that Victor Garber is leaving the series sometime this season. What's that going to mean for Firestorm?

Matt Hough said:
I just read that Victor Garber is leaving the series sometime this season. What's that going to mean for Firestorm?
Click to expand...

Just to give everyone a heads-up: The nature and exact timing of Victor Garber's departure as Martin Stein is floating around the internet right now. So if you don't want to get spoiled, tread carefully.

I continue to be fascinated by the idea that the "proper" timeline includes a dystopian future. We've already seen that Star City is a lawless dystopia in 2046, and now we see that Seattle is a dystopian police state in 2042. "Arrow" has frequently hinted about A.R.G.U.S.'s less than savory tactics, and now we see what they'd be like if let off the leash to embrace their worst instincts.

In the comics, Zari Tomaz is the Egyptian superhero Isis, loosely adapted from the seventies Filmation series that was paired with "Shazam!" on Saturday mornings. Given that ISIS has a whole different connotation these days, my guess is that she won't suit up as her alter-ego.

Amaya's ancestor in the vision was played by Maisie Richardson-Sellers's real life mother, Joy Richardson, who is probably best known for playing the last pregnant woman on Earth in Alfonso Cuarón's film adaptation of Children of Men. Very cool.

With regard to the water witch:

She is quite obviously Kuasa, Amaya's granddaughter. Kuasa was murdered wearing the water totem of Zambesi, so it makes sense that she can manipulate water now that she's been resurrected.

Strange that Ray remembers fighting along side her, and even references it at one point in the episode, but doesn't seem to recognize her when he comes face to face with her.
Reactions: NeilO and DavidJ

Adam Lenhardt said:
In the comics, Zari Tomaz is the Egyptian superhero Isis, loosely adapted from the seventies Filmation series that was paired with "Shazam!" on Saturday mornings.
Click to expand...

Nick Zano stole practically every scene he was in, tonight. LOL on several occasions.

P.S. The inside jokes are hilarious as well (Martin Stein and Mick Rory)
Expand signature
Yeah, well like, that's just your opinion, man.

Matt Hough said:
I just read that Victor Garber is leaving the series sometime this season. What's that going to mean for Firestorm?
Click to expand...

Since it seems like in almost every episode these two halfs of a whole hero are physically separated (and therefore can't become Firestom) even when going on dangerous missions, probably not much.
Expand signature
Compromise where you can. And where you can’t, don’t. Even if everyone is telling you that something wrong is something right, even if the whole world is telling you to move. It is your duty to plant yourself like a tree, look them in the eye and say, no. You move. - Peggy Carter

Oh boy, how much fun is this show? The Ray-as-a-kid episode was a delight. More of a straight ET remake than a Stranger Things-type homage, but still tons of fun. (Nice Aliens references too.) For my money, a more good-natured, light-hearted good time cannot be found anywhere on television.

And I'm glad to see that (perhaps)
Stein's exit won't have to mean Stein's death.
That will be refreshing.
Expand signature

I don't have time enough to watch all these DVDs!
Reactions: Richard V and DavidJ

I was afraid this week's episode wasn't going to be any good, but I had an absolute blast with it.
Reactions: Richard V

I was really bothered by the entire Stein story. How can he miss the birth of his grandchild when they travel through time? Like for some BS reason the events of 2017 can be missed if he is in the 80's while they happen? Are you kidding me!? He should be able to be having adventures with the Lengends for years and then return to 2017 on he day he left if he wants. Sorry, that kind of stuff just drags this otherwise fun show WAY down for me. Unfortunately, they seem to do this kind of stuff a lot.
Expand signature
Compromise where you can. And where you can’t, don’t. Even if everyone is telling you that something wrong is something right, even if the whole world is telling you to move. It is your duty to plant yourself like a tree, look them in the eye and say, no. You move. - Peggy Carter
You must log in or register to reply here.