What a strange compilation of actors, genres, and styles is Kaz I Kiriya’s Last Knights! An inarguable samurai story resituated into a nebulous European middle ages fictional country and featuring an international cast of performers all speaking English but in their own unmodulated accents makes for one big goulash of a film. As a medieval knight adventure tale, it has some merit in the acting and directing, but there’s nothing particularly special about the story: the kind of downfall and redemption tale that’s been around longer than any of us has been alive. 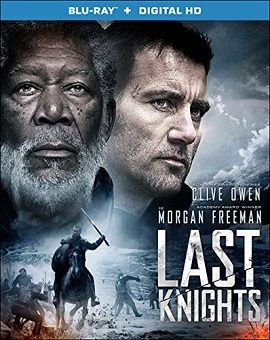 Refusing to pay an exorbitant bribe to his Emperor’s (Peyman Moaadi) chief minister Gezza Mott (Aksel Hennie), Lord Bartok (Morgan Freeman) and his chief warrior Commander Raiden (Clive Owen) are stripped of their family name, and Raiden is commanded to execute his master. After doing so at his master’s command, Raiden is a broken man degenerating into a guilt-ridden husk of his former self and falling into gambling and drinking his way to oblivion. Mott, however, is terrified that Raiden is simply biding his time before retaliating since it was Mott’s idea for Bartok and Raiden’s punishment. He has himself surrounded by thousands of guards behind a heavily guarded fortress with an iron door for protection, but even detailed reports of Raiden’s degradation aren’t enough to mollify his fears. But the remaining knights once under Bartok’s command haven’t been idle during the year since they were split apart. They’re massing to attack Mott’s fortress whether Raiden joins in the fight or not.

Beginning with an aggressive battle showing the speed and strength of Bartok’s knight brigade, the film then has a lengthy middle section detailing the fall of the house of Bartok and the drunken debaucheries of Raiden until he’s aroused from his stupor and finds something in life to live for again – his honor. The script by Michael Konyves and Dove Sussman doesn’t do an adequate job helping us understand exactly what it is that rouses Raiden from the depths of his despair, and it’s also shortchanged its audience on revealing background about this world that he’s plopped us down into with its touches of European and Far Eastern cultures all mixed together. But the action stuff all works well, even the climactic storming of the fortress that owes no small debt to many James Bond and Jason Bourne infiltration missions despite this taking place centuries ago. Kaz I Kiriya’s direction is stronger in the action sequences than it is in the domestic scenes where Raiden’s idyllic life with his wife (Ayelet Zurer) is lovely but uninteresting and Mott’s bullying and abusive behavior of his wife is only served in glimpses of her facial and bodily bruises. Key information for character building is missing throughout, and it gives the film a sort of an empty epic feel: grand action set pieces but nothing meaty and significant to hold it all together.

Clive Owen’s sincere devotion to his master and subsequent agony over what he’s forced to do is well constructed by the actor, but the script doesn’t give him even more on which to build a truly memorable hero. As this feudal lord, Morgan Freeman’s very American accent seems a bit disconcerting surrounded by the mixed ethnicities surrounding him, but there’s no denying his forcefulness and power when he faces down his adversary with a controlled but pointed verbal tongue lashing that’s a highlight of the movie (but then, he’s famous for those, isn’t he?). Aksel Hennie is a little stiff as the cowardly, bullying Gezza Mott, but we certainly wait all movie long for him to get his comeuppance, and we aren’t disappointed. Tsuyoshi Ihara playing the chief warrior guarding Mott who has the climactic duel with Owen’s Raiden is the mostly strong and silent type and makes an imposing adversary for Raiden. Peyman Moaadi as the determined Emperor and Cliff Curtis as Raiden’s best friend both make significant contributions to the film’s power.

The film’s theatrical aspect ratio of 2.40:1 is faithfully presented in a 1080p transfer using the AVC codec. With blue and green screen work being tantamount to achieving this story set in the Middle Ages, there’s some inherent softness and inconsistent contrast present in order to blend live action footage with CG backgrounds though close-ups reveal great amounts of detail in facial features and hair textures. Color has been desaturated a bit to suggest an earlier era, and the overall palette of the movie (shot in Prague) is icy grays with pale skin tones. Black levels aren’t notably outstanding but are certainly more than adequate. The movie has been divided into 16 chapters.

The DTS-HD Master Audio 5.1 sound mix isn’t quite reference quality with split surround effects not always utilized during scenes that aren’t battle-oriented. Martin Tillmann and Satnam Ramgotra’s music does get nice separation into the fronts and rears and offers quite a bit of power on occasion. Dialogue has been well recorded and has been placed in the center channel.

Behind the Scenes of Last Knights (22:03, HD): one of those mutual admiration society featurettes with all of the principal cast and crew praising each other’s efforts, discussing the 50-day shoot in freezing Prague, and sharing memories of the combat training. Among those speaking are director Kazuaki Kiriya, producer Luci Kim, cinematographer Antonio Riestra, production designer Ricky Eyres, costume designer Tina Kalivas, and actors Clive Owen, Morgan Freeman, Cliff Curtis, Aksel Hennie, and Peyman Moaadi, among others.

A Look at the Special Effects of Last Knights (5:04, HD): a succession of shots from the film showing overlays of effects work as the completed scenes are built in the computer.

A curious but certainly watchable attempt to merge medieval tales of derring-do with a samurai tone, Last Knights is neither great nor terrible, and fans of the stars or of the mixed genres might want to consider a rental for this one.

Sigh.
You must log in or register to reply here.