The long-running French play La Cage aux Folles by Jean Poiret was brought to the screen by director Edouard Molinaro and screenwriter Francis Veber with unexpectedly great success. In its day, La Cage aux Folles was the highest grossing foreign film in American history, and the story later served as the basis for a rousingly successful Broadway musical penned by Jerry Herman and Harvey Fierstein and a broader Americanized film remake The Birdcage directed by Mike Nichols. In this era of marriage equality debates and non-traditional families, the story of La Cage isn’t much of an eye-opener, but take that back a few decades, and it’s easy to see why the play and its subsequent film version were so radical. 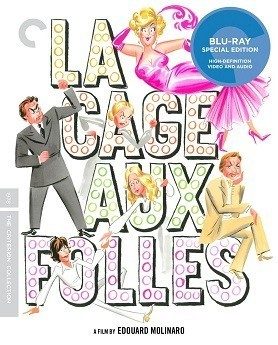 Gay couple Renato Baldi (Ugo Tognazzi) and Albin Mougeotte (Michel Serrault) together own La Cage aux Folles, one of the most glittering and celebrated nightclubs in St. Tropez, and Albin serves as the star attraction: Zaza, a female impersonator. Renato’s son Laurent (Rémi Laurent) from a long ago one night stand with Simone Deblon (Claire Maurier) announces that he’s engaged to Andrea Charrier (Luisa Maneri), the daughter of the arch conservative Minister of Moral Order (Michel Galabru). During the first meeting of the parents, Albin through a series of slapstick circumstances is forced to masquerade as Laurent’s mother Simone and surprisingly charms the straight-laced father of the upcoming bride though how long he’ll be able to pull off the charade is anyone’s guess.While Poiret’s original play has been opened up for the screen (views inside the drag-based nightspot and in the streets and shops of St. Tropez) and outfitted with some new gags (all of the farcical business at the Charrier home as Simon Charrier attempts to avoid reporters pressing for a statement about a disgraced politician), the basic story remains, and all of the stage highlights are also present here including the famous sequence involving Albin’s lessons on masculinity (though Jean Gabin as the model of masculinity has been changed to John Wayne). You won’t find many scenes warmer than when the La Cage family brings in a celebratory cake, but in at least one instance, the American musical version beats this film: in the musical, the son finally realizes the error of his selfish, thoughtless demand for Albin’s banishment and apologizes to the man who had been a major part of his upbringing; this film offers no such redeeming moment for Laurent and is the poorer for it.As Albin, Michel Serrault won just about every prize a French actor could win in his own country for this performance, but in retrospect, there seems to be a bit too much shrieking and mumbled dialogue (fortunately, there are English subtitles available) though one certainly does lose his heart to Albin when he comes out dressed as the uncle trying mightily not to embarrass his beloved son. Some of the other performances ring a little truer including Ugo Tognazzi’s understated Renato (he was the box-office name of the cast but didn’t like the material and did the movies only for the money; his French is dubbed in the film by Pierre Mondy) and Michel Galabru’s frantic government minister who gets wonderfully in the spirit of the farce and milks it as much as he can. Benny Luke’s Jacob isn’t as flamboyant as later stage and screen incarnations of the character would prove to be, but he’s certainly a welcome presence every time he makes an entrance. Rémi Laurent as Laurent does well enough in the fairly colorless role of the thoughtless son.

The film is presented in a 1.66:1 aspect ratio and is offered in 1080p resolution using the AVC codec. Because of the varying consistency of the contrast throughout the presentation, scenes can look sharp or foggily soft (don’t lose heart during the opening credits: it does sharpen up from those highly diffused images) and often change without warning. Color is the most vibrant it’s ever been with this title, but that still doesn’t always result in consistently saturated hues. Skin tones are mostly realistic. Black levels are only average, but compared to the previous DVD releases, there has been major clean-up done here, and it looks the best it ever has on home video. The film has been divided into 21 chapters.

The PCM 1.0 (1.1 Mbps) sound mix won’t ever win any prizes for startling fidelity. Much of the film was post-synched, so the voices and music (a delicious score by Ennio Morricone) and sound effects don’t always lie entirely comfortably together. (In fact, the English subtitles are a godsend since the music sometimes is the dominant feature on the mono track even during dialogue scenes.) As with the video, there has been obvious audio clean-up which has rid the track of most of the hiss, distortion, and other age-related problems found on the DVD versions of the movie.

Edouard Molinaro Interview (18:33, HD): the director tells his backstory and what led him to directing the film in the first place before offering up some startling information about the film’s production. This interview was recorded in 2013.Archival Footage (HD): The comedy team of Michel Serrault and Jean Poiret are presented in three television sketches:Laurence Senelick Interview (22:49, HD): the noted author and historian gives a brief history of drag and explains how La Cage aux Folles on stage and screen deviated from the established norms for the genre.Theatrical Trailers (4:05, HD): a montage of the French and American trailers for the movie.18-Page Illustrated Booklet: contains cast and crew lists and critic David Ehrenstein’s trenchant essay on the film.Timeline: can be pulled up from the menu or by pushing the red button on the remote. It shows you your progress on the disc and the title of the chapter you’re now in. Additionally, two other buttons on the remote can place or remove bookmarks if you decide to stop viewing before reaching the end of the film or want to mark specific places for later reference.

Though the Jerry Herman/Harvey Fierstein musical delves more deeply into both the farcical elements and the heart at the story’s core, the original film version of La Cage aux Folles should certainly be seen, and this new Blu-ray treatment from Criterion presents the movie in its best-ever home video incarnation with some most interesting bonus features as an additional lure. Recommended!

Thanks for another great review, Matt!

Thank you.
You must log in or register to reply here.