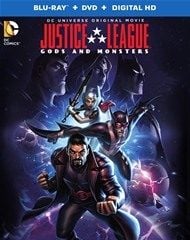 The Justice League finds itself under scrutiny from humanity after a series of murders of noted scientists point directly to Superman, Batman, and Wonder Woman as the most obvious suspects for these crimes.

Superman, Batman, and Wonder Woman comprise a harder-edged Justice League in this alternate version of the DC heroes. Superman is not Clark Kent, and not even the son of Jor-El, but still a son of Krypton whose father was General Zod. Batman is Kirk Langstrom, a scientist who made himself a vampire after an experimental injection intended to cure his cancer has unintended consequences. Wonder Woman is Bekka, daughter of Highfather of the New Gods. Students of the DC mythology who are familiar with the names of Ray Palmer, Victor Fries, Will Magnus, Amanda Waller, and others will recognize familiar yet different versions of these characters in Justice League: Gods and Monsters.

Superman(Benjamin Bratt), as the son of General Zod, was never found by kindly Jonathan and Martha Kent upon his arrival on Earth, and the sum of his heritage and environment have turned him into a Superman who uses lethal force routinely. This Superman does not even have the alter ego of Clark Kent to ground him and tie him to humanity, and his relationship with Lois Lane(Paget Brewster) is anything but romantic. The Batman(Michael C. Hall) is a vampire who frequently kills as a logical consequence of his nature. Wonder Woman(Tamara Taylor) is a daughter of Highfather(Richard Chamberlain) of the New Gods whose betrayals and disappointments have made her a fierce and unforgiving warrior.

The screen story requires some patience, which is ultimately rewarded, as the nature and origins of these unfamiliar characters with familiar names is revealed gradually rather than immediately as is the case in many superhero origin stories. We learn the details of Superman's altered origins in the beginning, but Batman and Wonder Woman are revealed and explained later.

Justice League: Gods and Monsters certainly earns its PG-13 rating as the body count and language demonstrate that this movie is intended for a teenage and adult audience, and not the preteen set. This film is among the best of the DC animated movies that have been released, and the violence is not gratuitous but in service to the story being told, as this Justice Leagues consists of harder and more ruthless characters than the traditional versions of these heroes. I see some influence from George R.R. Martin's Game of Thrones in this narrative, which may be all that further needs to be said regarding the tone of this film. The mystery propelling the story has a few twists and turns before the heroes confront the true villain in an epic showdown.

Story creators Bruce Timm and Alan Burnett have distinguished themselves in DC animation over the last 20 years following their stellar contributions to Batman: The Animated Series. In Justice League: Gods and Monsters, Timm and Burnett have created some fascinating characters that will undoubtedly be seen more in the future, both in the web series Justice League: Gods and Monsters Chronicles and in a tie-in comic book series. Note to Warner Brothers: please let Timm and Burnett do whatever they please with the DC superheroes, as their interpretations (and reinterpretations) of these characters are consistently entertaining.

Justice League: Gods and Monsters is presented in the AVC codec in a 1.85:1 screen aspect ratio. There are no compression artifacts to speak of, but the fine line artwork of the animated figures shows aliasing when characters are in motion, as this animation style does on other DC animated releases. The presentation influenced by animator Timm's designs makes fine use of primary colors which are conveyed divinely on this release. Although the video presentation is very good on the main feature, and most of the special features, the episode included of Superman: The Animated Series from the DC Vault appears to have been transferred low res from videotape. The actual episode, "Brave New Metropolis", is great, but the video quality is lacking. One hopes that future selections from the DC Vault will be of better presentation quality.

The wealth of special features includes all of the following:
Sneak Peek at Batman: Bad Blood(11:45): Footage from the animated feature due for release in the near future on Blu-ray and DVD with actor Jason O'Mara, producer James Tucker, and director Jay Oliva which is a sequel to Batman vs. Robin.

Alternate Realities: Infinite Possibilities(19:24): This featurette has Michael Carling, creative director of DC Animation, and Dan DiDio, co-publisher of DC Comics, and screenwriters Bruce Timm and Alan Burnett speaking about the history of alternate realities presented in DC Comics.
Calculated Risks: The Making of Justice League: Gods and Monsters(23:37): The producers of this film talk about the challenges of creating this brave new alternate world.

The New Gods(22:13): This featurette presents a brief history of writer/artist Jack Kirby's creation of the New Gods in 1970.

DC Comics Vault: Consists of the following 4 animated episodes in standard definition: "Phantoms"(22:25) from Legion of Superheroes and "Brave New Metropolis"(21:19) from Superman: The Animated Series.

Also playing by default at the beginning of the Blu-ray disc are trailers for Batman Unlimited: Monster Mayhem(1:43), Scooby Doo and KISS: Rock and Roll Mystery(1:33), LEGO Dimensions(2:32), and Justice League: Throne of Atlantis(2:00).
Also included are a DVD and a paper insert with a validation code for Ultraviolet for those consumers enamored with storing their media by server.

Alan Burnett and Bruce Timm have done it again with Justice League: Gods and Monsters, an entertaining reinterpretation of the original Justice League. The video and audio presentation are very good, and there are enough special features to leave you wanting more.

Justice League: Gods and Monsters is also available as part of a limited edition gift set that includes a statuette of Bekka aka Wonder Woman.

Anyone who enjoyed the Batman, Superman, and Justice League animated series with which Timm and Burnett were involved will certainly enjoy Justice League: Gods and Monsters, and this release comes highly recommended.