After 20th Century Fox dropped the Mr. Moto series of B-film mysteries, the studio searched for a low budget replacement and happened on Brett Halliday’s Michael Shayne, a wise-cracking private detective who was starred in a series of seven Fox B-pictures before a break and a resumption of production at another studio. Herbert I. Leeds’ Just Off Broadway was the penultimate Shayne mystery at Fox, and judging from some of the absurdities present in the movie, it’s obvious the series was running out of steam. 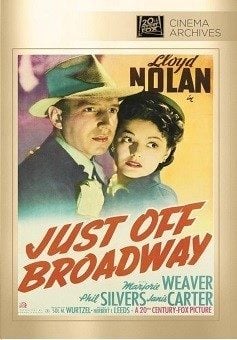 During a high profile murder trial, an important defense witness (Leland Hodgson) is murdered on the witness stand in the middle of his testimony. He had been taking cues from club owner/gangster George Dolphin (Don Costello) seated in the gallery, but a knife through the heart thrown from some distance by an expert ends his testimony abruptly. One of the jurors, private detective Michael Shayne (Lloyd Nolan), jumps from the jury box and hides the murder weapon and then later sneaks out of his jury-sequestered room to investigate the identity of the knife thrower to see if indeed the two cases are connected. Assisting him in his midnight investigation is intrepid girl reporter Judy Taylor (Marjorie Weaver), but when her photographer Roy Higgins (Phil Silvers) recognizes Shayne as one of the jury, it’s a cat-and-mouse chase through the evening and early morning to gather clues to solve the mysteries and elude Higgins so Shayne won’t be cited for contempt of court.It’s a decent little mystery that screenwriter Arnaud D'Usseau has concocted for this B-movie thriller, but with only about an hour to do all the investigating (with another body or two turning up en route) and wrapping up, there really isn’t enough time to delve very deeply into the clues and suspects to give the viewer an honest chance of solving the crime before Shayne announces his solution (and it’s a doozy of a denouement). The idea of Shayne's sneaking out of his sequestered surroundings is fun (movie private eyes always skate around the rules), and Shayne and Judy Taylor have the combative give and take that makes mysteries like this one both familiar and entertaining, but having Shayne near the end of the movie stand up in the jury box and proceed to interrogate witnesses as if he were the lawyer (with neither the judge nor the opposing counsels uttering a word in protest) is beyond absurd and spoils whatever fun the previous fifty-five minutes or so might have generated. Producer Sol M. Wurtzel’s go-to director Herbert I. Leeds handles the chases and fights with economy and ease; he even works in a song number by Rita Darling (Joan Valerie) in a nightclub sequence that provides plenty of opportunities for Phil Silvers to stumble and bumble around as the clumsy photographer.Unlike two-fisted investigators like Sam Spade or Philip Marlowe, Lloyd Nolan’s Michael Shayne isn’t much of a fighter or a lover. Nolan offers his usual competent performance and even tosses off a couple of funny putdowns, but a more dynamic actor (or a more dynamic performance from Nolan who was certainly capable of it) would have gone a long way toward giving the film more personality and verve. Marjorie Weaver’s Lois Lane wannabe isn’t too terribly irritating once one resigns himself to her determined insertion into the case (though she cancels her one extremely helpful assist with one bone-headed blunder), and Phil Silvers even in 1942 was already plying his familiar catch phrases and persona in this otherwise nondescript role. More full of character are Don Costello as the threatening hood, Alexander Lockwood as the knife thrower who figures so importantly in the case, and Richard Derr and Grant Richards as opposing counsels.

The film is framed at 1.33:1. Sharpness is above average for the most part, but the grayscale features very mediocre black levels and inconsistent contrast which sometimes gives the image a milky quality. There are specks, debris, and occasional scratches, and the reel change cues are also present. The film has been divided into chapters every ten minutes so there are 7 chapters present here.

The Dolby Digital 2.0 sound mix is decoded by Dolby Prologic into the center channel. The mono mix features well recorded dialogue which is never a problem to hear and understand even with the low level hiss present and numerous pops and occasional crackle also present on the soundtrack.

There are no bonus features present on this made-on-demand disc.

Fans of the Michael Shayne films will no doubt want to have this even if it isn’t nearly as good as some of the earlier entries in the series. This Fox Cinema Archive release is rather average all around from the film itself to the audio and video presentations.

Thanks for the review Matt. This and Time to Kill are at the top of my missing list and my copy is on its way. From your comments it doesn't seem that the DVD has been given the same treatment as the previously released titles which may explain why it hasn't already been released. I hope that Time to Kill follows shortly. This series follows the Rathbone Holmes films in my esteem.

The Shayne character in the Brett Halliday novels was a much tougher character than the way he is portrayed by Lloyd Nolan. Even so, I'm a bit disappointed that we apparently are never going to see Volume 2 of the "Michael Shayne Mysteries" set which was released in 2007 (and now is available for $6.75 through Amazon).

However, maybe this means that Fox will release Time to Kill, the only Fox Shayne film which has never received a home video release. In fact, I've never even seen it on the Fox Movie Channel.

My copy has arrived unexpectedly before Christmas. The first time I have seen it and very enjoyable. Picture quality is quite good but not up to the standard of the previous releases. I doubt it will be improved but a nice early Christmas present.

I had forgotten that I have a bootleg copy of Time to Kill on DVD. It's a bit ragged in spots but watchable. It's based upon a Raymond Chandler novel, "The High Window," and Shayne takes the place of Philip Marlowe. It's a fast-moving, interesting mystery and I hope that Fox gets around to giving it a legitimate release. It was remade in 1947 as The Brasher Doubloon, which is a Fox Cinema Archive title.

I've been waiting to see the last two MICHAEL SHAYNE movies for years and wouldn't even have known this was around if not for this review. Thanks SO much, Matt!!
You must log in or register to reply here.