Adapted from Henri-Pierre Roché’s novel, Jules and Jim is rightfully considered one of the greatest films ever made. Influences resonate still to this day in films that explore complicated relationships and the passing of life’s sweet but often brief moments of delighted freedom. The skillful direction by Truffaut has, by their admittance and their work, influenced greats like Scorsese, and his embrace of filmmakers as authors of their work helped shaped directors like Steven Spielberg, Brian DePalma and Francis Ford Coppola. Though it must acknowledged that Truffaut was clearly influenced himself by greats such as Renoir and Hitchcock (and thus influenced begat influences, ad infinitum), it is hard to overstate Truffaut’s contribution to the great cinematic art. And Jules and Jim is an excellent example of that contribution. 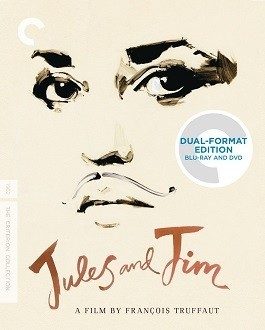 “I’d rather have won all this”

Jules and Jim, two educated, literarily inclined men from different countries become fast-friends through a chance meeting in France. Jules, from Germany, is quite reserved, lacking assertiveness and not at all adept at finding and meeting women; Jim on the other hand is quite assured. A confident French man more comfortable with his looks and practiced at brief encounters with beautiful women. Their quickly struck friendship is conduit for great conversation and mutual respect and admiration.A pleasant, leisurely life for the two changes when Jules meets Catherine, a free-spirited, vivacious, and lovely young woman. Irreverent, spontaneous and quite special, she infects the heart and spirit of Jules, and upon her first meeting with his friend, Jim as well. Through 25 years we watch these three; separation by the Great War, the marriage of Jules and Catherine, the birth of their child, and the deep complications that draws to the surface of Jim’s attraction to Catherine.Director Francois Truffaut has long been applauded for his central role in the founding of French New Wave cinema. Following a strong first few films, including the extraordinary The 400 Blows, Truffaut successfully cast off many conventions of cinema with the fascinating Jules and Jim. This film is a study, over time, of three friends whose relationships stay the same and change all at once. They are rapt by a short period of bliss in their lives and are never able to accept that the time has passed. They are perhaps unable to change, or too afraid of what change will do to them. They grip that joyful period of their lives with such jealous ferocity that all other considerations of life are secondary – this includes relationship and sexual convention. Truffaut positively dives into their lives using a free and, at times fluid, use of the camera that grants us permission to peer into their lives; to become a part of the trio rather than merely observers. It’s wonderfully, and at times painfully intimate.One of Truffaut’s gift as a filmmaker, perhaps born from his frustrations of French cinema’s staid and risk-averse trappings he observed as a riling film critic, is in understanding moments and how the camera, and the art and craft of film, can capture and convey those moment for audiences. Witness as the three race down a long footbridge. Using fast cuts, close-ups, and expressions from his actors, he shows us a key moment and tells us a great deal with very little by way of dialogue.Jules and Jim as a narrative is told with such a brisk, almost urgent pace, that one might be inclined to offer a complaint that Truffaut is speeding through the lives of the three central characters. And he is, but it isn’t wrong to do so. Though we see them over the course of 25-years, we are no less involved in their world, their weaknesses, and the burden of their feelings. At one point, the low and reflective voiceover describes the relationship between Jules and Jim as a “Long, uninterrupted conversation”. And it is. Dialogue is often sparkling between the characters, pressing at times, playfully sparring before sinking to pensive, regretful, wistful and worried.Though titled Jules and Jim, it is the pull and lure of Catherine that underpins almost everything we see in the film. Catherine, portrayed with sublime gift by Jeanne Moreau is at first a pleasant, free-spirit, but her troubled nature is not far off. When Jules and Jim first reunite following the war, they proclaim how neither had changed. But they had changed, quite deeply. Jules describes his love’s emotional woes with great sorrow and relent to Jim. And yet we still do not understand the extent of Catherine’s troubles. Yet.The Great War was a turning point for the world, and for Jules, Jim and Catherine it certainly was too. The marriage between Jules and Catherine is the beginning of the end. “We found ourselves face to face instead of merged as one”, Catherine tells Jim of her life with Jules. Jim will soon embrace the attraction to– or silent infatuation with – Catherine. He wishes for that which Jules had found so many years before. Jules, unable to live without the fire and lure of Catherine allows his life-long friend to be with her just so she will not be beyond his world. It is a fateful move. Jim, portrayed by Henri Serre, and Oskar Werner’s Jules are innately likeable. Warm characters with an embrace of life’s gifts. Both Serre and Werner, who would later appear in Truffaut’s adaptation of Ray Bradbury’s Fahrenheit 451, are terrific. Werner’s Jules is most immediately relatable, though as the lives progress his decisions do somewhat alienate us as the audience. We understand his faintness in love driving his foible, but that does not lessen our disappointment. Serre’s Jim earns sympathy much later in the film, and his performance during the final scenes is earnest.Intelligent, meaningful writing, wryly expressive and sullen, featuring refreshing filmmaking and approaches, shaking free cinematic conventions of Hollywood (and helping to injecting a freshness that still feels that way today), Jules and Jim is a beautiful work.

This high definition, 1080p transfer is excellent and is presented with a 2.35:1 aspect ratio. Superb contrast, a lovely film texture, and clean throughout mark the fine presentation. I can offer no real complaint about this new digital transfer. Created in 2k resolution from the 35mm original camera negative (in consultation with the film’s cinematographer, Raoul Coutard), the result is highly pleasingTruffaut’s use of stock footage, particularly World War I sequences, come with different ratios and are expectedly of lower quality. Part of the charm really.

The uncompressed French monaural soundtrack, accompanied by subtitles in English, was remastered at 24-bit from the 35mm magnetic tracks and the sound negative. Good depth and clean, issue-free sound is the result. Of greatest joy is listening to the wonderful soundtrack provided by Georges Delerue, one of the greatest film composers to have lived. He provided Jules and Jim with a jaunty, romantic, yearning and often melancholic score that aches with beauty – long his musical gift. Delerue maintained a strong working relationship with Truffaut – similar in ways to Williams and Spielberg’s collaborative bond, producing a number of fine scores (A suite of which can be found on the excellent Great Composers: Georges Delerue CD from Varese Sarabande).

Criterion offers a fine selection of extra features. A hybrid of previously available materials with new give a welcome deeper look into this film, impact and the contributions of director Truffaut. Of special importance is the interview with co-writer Gruault which Criterion, granted access to the original full interview, have put together a fine representations. Additionally, the archival appearances/interviews with Truffaut discussing his craft and Jules and Jim in particular is insightful. A fine selection of special features.Two audio commentaries: one featuring coscreenwriter Jean Gruault, longtime François Truffaut collaborator Suzanne Schiffman, editor Claudine Bouché, and film scholar Annette Insdorf; the other featuring actor Jeanne Moreau and Truffaut biographer Serge ToubianaThe True StoryInterviews19-minute interview with cinematographer Raoul Coutard21-minute assembled interview with Co-writer Jean Gruault from 1986Robert Stam and Dudley Andrew: A 23-minute Conversation between film scholars Robert Stam and Dudley Andrew discussing the importance of Jules and Jim.Truffaut on Truffaut: A series of archival interviews with Truffaut spanning a number of years in which he discusses his work and approach for Jules and Jim. TrailerDVD Version of the filmAccompanying Booklet: 32 page booklet which features “an essay by critic John Powers, a 1981 piece by Truffaut on Roché, and script notes from Truffaut to Gruault.”

While we may not relate to Jules, or Jim, or Catherine (though I suspect there will be those who see hints of themselves), we are nonetheless deeply involved in their journey. We may shake our heads at the weaknesses, curiously ponder the jealousies, and even wonder aloud how a person could be so enchanted as to cede what we see as their dignity. And yet, we yearn for a happy ending. Perhaps that’s the trap we fall into. Perhaps Truffaut would have wanted a happier epilogue for these three spirits locked searching for that fleeting moment of freedom and happiness that gripped them their first trip to the seaside. But alas, we cannot recapture past or lost moments. Not accepting that, this story tells us, is ruin for the soul.

Love Jules and Jim and makes me want more Truffaut released on blu-ray. There is talk of The Soft Skin being released by Criterion soon and i hope Two English Girls gets a much needed re-release since the dvd and the Criterion laserdisc looked ok but not great.

I watched this again for the first time since it was published and was pleasantly surprised at how gorgeous this looks projected, upscaled to 4K. It is simply perfect - reference quality. And the film itself is so far ahead of anything made in the 1960's, it doesn't seem to have aged at all. I wish I was French.
You must log in or register to reply here.