Known primarily for his message films featuring various social and political quandaries posed within an entertaining framework, Stanley Kramer produced and directed perhaps his quintessential film with 1961's Judgment at Nuremberg. With its important sociopolitical plot and with wonderfully realized characters, Judgment at Nuremberg ranks as probably the most important courtroom drama ever made and certainly at its best as riveting as Kramer’s last foray into the courtroom in Inherit the Wind. These two films certainly rank among the peaks of his career, and it’s possible that Judgment at Nuremberg is the finer achievement. 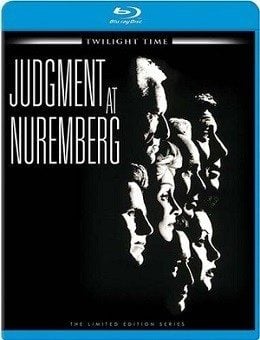 Nuremberg, Germany, in 1948: the trials of Nazi war criminals continue with the prosecution of four high ranking judges in the German judiciary: Emil Hahn (Werner Klemperer), Werner Lampe (Torben Meyer), Friedrich Hofstetter (Martin Brandt), and the head of the Council of Justice Ernst Janning (Burt Lancaster). Selected to serve as chief justice of the tribunal is an unknown Republican district court judge from Maine, Dan Haywood (Spencer Tracy). Prosecutor Colonel Tad Lawson (Richard Widmark) argues as educated adults, the judges were responsible for complicitly overseeing the murder, brutality, and atrocities committed during the era of the Third Reich. Defense attorney Hans Rolfe (Maximilian Schell) counters that the men were only upholding the laws of the land and doing the jobs for which they had been appointed. During the eight months of the trial, Haywood bends over backward to understand both sides of the argument in order to render a fair verdict, but he’s under pressure from a charming German aristocrat (Marlene Dietrich) to leave her country with some dignity and pressured from officials like Brigadier General Matt Merrin (Alan Baxter) that Germany now being an ally should be given some special consideration by letting the past stay buried in the past.Abby Mann’s screenplay is an especially ambitious extension of his Playhouse 90 drama which was produced in 1960, and he’s doubled the running of time of the original drama by including a great amount of local color as Haywood travels around Nuremberg surveying not only the destruction from the war (with echoes of the militant massed rallies echoing on the soundtrack) but also getting to experience local color and witnessing a nationalistic temperament (via pubs, recitals, and private parties) that has not abated even after the country’s total surrender. The script also plays fairly with the facts offering reasonable (albeit highly emotional) arguments for both sides that keep the ending in doubt (for those who don’t know their history or who haven’t seen the film before). Stanley Kramer’s direction is never ostentatious but rather features a camera that is slyly creeping around the courtroom during the trial and that comes in with powerful, zooming close-ups right before pivotal moments occur. The film’s most notorious moment, of course, involves the unveiling of the shocking movies taken by the liberators of the concentration camps which show irrefutable proof of the mass exterminations of millions of undesirable Europeans by the Nazis, images that speak more profoundly than a million speeches or protests of innocence and which make a powerful movie even more explosive.One of the greatest movie casts ever assembled play these pivotal roles. Spencer Tracy, in his final decade as an actor often the representative of the fair and just, exudes both of those qualities throughout but especially in the courtroom as he takes no sides but remains impartial in his deciding on objections for and against the prosecution. His presence amid such explosive emotions which swirl around him both in and out of court is most comforting and agreeable. Only two actors reprised their roles from the television version of the production: Werner Klemperer as the proudly zealous Nazi Emil Hahn and Maximilian Schell as the intense defense attorney. Though this was not his first American film, Schell shows no intimidation performing with actors of such high blown reputations, and his passionate performance earned him Best Actor awards from the New York Film Critics, the Golden Globes, and the Motion Picture Academy. Richard Widmark, in a career high point, is no less forceful and commanding as the prosecutor, and he and Schell square off in some momentous courtroom debates. In one of the less showy roles of her career, Marlene Dietrich brings a calm but stately manner to her performance as Mrs. Bertholt, and she’s most effective as she tries to convince Tracy’s Haywood that the Germans did not know what atrocities were being committed in those camps. As tortured victims of the Nazi regime, Montgomery Clift as Rudolph Petersen, a man sterilized for feeblemindedness, and Judy Garland as Irene Hoffman, a woman charged with consorting with an elderly Jewish man, bring real poignancy and a human face to the courtroom as average citizens punished for unreasonable crimes against the state. Oddly, Burt Lancaster, one of the most galvanizing of American actors in this period, makes the least impression as Ernst Janning: not a poor performance but not one in which he excels. In smaller roles, William Shatner as Haywood’s liaison, Virginia Christine as a German domestic who likewise claims ignorance of the Nazi's schemes, and Edward Binns as the senator who brings Haywood to Nuremberg make brief but memorable impressions.

The film has been framed for video at 1.66:1 and is presented in 1080p using the AVC codec. There are age-related specks and debris on occasion, but most of the image is beautifully sharp (apart from some glamour photography for Miss Dietrich) and detailed with the tweeds and herringbone coats posing no problem for image stability. Grayscale is very impressive with rich black levels and whites that are nicely under control. Contrast has been consistently applied throughout. The film has been divided into 12 chapters.

The disc offers both DTS-HD Master Audio 1.0 and 5.1 sound mixes. Both are exceptional for a soundtrack of this age, but the re-purposed 5.1 track is really the track of choice here where directionalized dialogue is especially impressive as the camera weaves around the courtroom and the voices lie in appropriate soundfields in regard to its placement. Ernest Gold’s stirring music gets a nice if not super-expansive spread through the channel array, and sound effects are nicely placed so there is no conflict with the dialogue-heavy production.

Isolated Music and Effects Track: Ernest Gold’s score is presented in DTS-HD Master Audio 5.1Overture-Intermission-Exit Music: may be selected to be played with the film (only using the DTS-HD Master Audio 5.1 track) in the main menu making the film’s running time 3 hours 10 minutes.In Conversation (19:38, SD): a 2004 sit down with Oscar-winning screenwriter Abby Mann and Oscar-winning actor Maximilian Schell (these two men claimed the only two Oscars garnered by the movie) discussing their time working on the television, movie, and Broadway adaptations of the story. (Schell played Janning on Broadway.)The Value of a Single Human Being (6:03, SD): Abby Mann reads from his screenplay stating the basic theme of his work.A Tribute to Stanley Kramer (14:27, SD): Kramer’s widow Karen Sharpe Kramer reflects on her introduction to the director that eventually led to a thirty-six year marriage. Meanwhile Abby Mann talks about how the television production (directed by George Roy Hill) inspired Kramer to buy the property and recalls the trepidation for the movie’s premiere in Berlin.Theatrical Trailer (3:00, HD)MGM 90th Anniversary Trailer (2:06, HD)Six-Page Booklet: contains black and white stills, poster art on the back cover, and film historian Julie Kirgo’s illuminating essay on the production.

A great film and one that has valiantly stood the test of time, Judgment at Nuremberg comes winningly to Blu-ray via Twilight Time. There are only 3,000 copies of this Blu-ray available. Those interested should go to www.screenarchives.com to see if product is still in stock. Information about the movie can also be found via Facebook at www.facebook.com/twilighttimemovies.

The Blu-Ray is light years ahead of the letterboxed DVD and I found "Judgment" to be far more gripping then ever before. For some reason, passing time has made the performances more striking. Perhaps because our own current events make the film's themes more contemporary then they seemed in the past. I was even moved by Burt Lancaster's passionate confession near the end of the trial. Shell's performance is as stunning as ever and Montgomery Clift gives the best performance of the latter part of his career. You are right, "Judgment At Nuremburg" has valiantly stood the test of time. Grab it while you can!

I love this film and own it on DVD. It is arguably Stanley Kramer's best work and Montgomery Clift's performance is incredibly moving.

I'd put "Inherit The Wind", which also features a great Spencer Tracy performance as a fictionalized version of Clarence Darrow, right up there with "Judgment" as two of the greatest filmed courtroom dramas ever...happy to finally have a well-made blu-ray of this and am looking forward to Twilight Time's release of "ITW" next month just as eagerly...thanks for the positive review, Matt!!!
You must log in or register to reply here.