John Wick is a symphony of murder and mayhem, a well choreographed and deftly plotted revenge story with a cast filled with famous names (sometimes in one scene roles) and views of New York City that give the Big Apple a vital, throbbing aura that is often missed in movies which are situated there. Though Chad Stahelski is the director of record on the film’s credits, the disc’s featurettes reveal him to have co-directed with his business partner David Leitch, and the men have produced a lean, mean killing machine of a movie, superbly paced without a moment of wasted time or superfluous bit of dialogue or action. 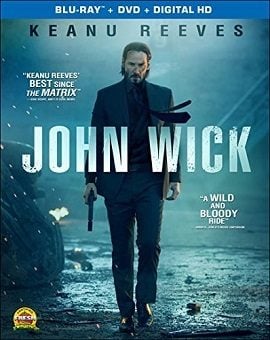 Professional assassin John Wick (Keanu Reeves) had been out of the game four years enjoying a domestic life with his wife Helen (Bridget Moynahan) when cancer takes her away from him. Before she dies, Helen arranges for a puppy to be delivered to her husband to help share his grief and lead to a spiritual healing, but an arrogant Russian mob son Iosef Tarasov (Alfie Allen) who covets John’s vintage Mustang invades his home, steals the car, and kills the dog when John isn’t willing to sell him the vehicle. With the last gift from his wife forcibly taken from him, John vows to locate Iosef and claim his life alarming mob boss Viggo Tarasov (Michael Nyqvist) to give his son 24-hour guards and put a $2 million bounty on John’s head which every hit man in Manhattan plus the multitude of mobsters also on the prowl are interested in collecting.

Derek Kolstad has created and then threaded a tongue-in-cheek fantasy world for professional assassins around this very realistic tale of cat-and-mouse stalking vengeance. There’s a crime scene clean-up crew for assassins, a luxury hotel where professional assassins can check in (for a gold coin fee, of course) and get 24-hour doctor service for their injuries, and a gangland night spot where men shooting at other men on the dance floor doesn’t stop the merrymaking one iota. The action set pieces have all been scrupulously designed using realistic karate and jujitsu moves that don’t require the elaborate wire work and CGI stunts that are typically found in today’s action thrillers and are all the more exciting since they appear often to be happening in real time and not filmed over the course of weeks. Directors Chad Stahelski and David Leitch handle both dialogue and action scenes with equal aplomb (the former is something of a surprise; the latter is more expected since they were/are acclaimed stunt coordinators in their own right; this is their first directorial effort, and it certainly won’t be their last). The writer and directors also use dramatic irony quite cleverly fooling the audience into early preconceived notions about John’s enemies and friends and turning the tables on us a couple of times during the film’s speedy running time. Though we know from past cinematic experience that there is no honor among thieves, we get something of a surprise along those lines which makes certain events later in the movie moving and occasionally even more satisfying.

As in his best screen performances, Keanu Reeves is always more formidable when he’s a man of few words, and that’s unquestionably the case here as he lets his actions speak volumes (though he does have one specific verbal face-off with Michael Nyqvist’s Viggo which allows him to display some of the enormous depths of grief that he’s carrying around). Nyqvist himself is very effective as the classy Russian mobster though he does allow his accent to slip several times. Alfie Allen is perfect as the spoiled, haughty son who bullies the wrong man, while Dean Winters gets to deliver some of his typical droll lines as Viggo’s right-hand man. Willem Dafoe has several good scenes as John’s friend/fellow assassin Marcus who’s tempted by the $2 million bounty, and Adrianne Palicki does herself proud in the action department as a feisty hitwoman who’s as formidable as any of the men. Most outstanding among the many adversaries Reeves’ John must fight is Daniel Bernhardt’s Kirill whose physicality masks very catlike reflexes which make him so deadly. In small but very effective roles scattered throughout the film are John Leguizamo as an owner of a high end chop shop, Ian McShane as the owner of the assassins’ hotel who demands strict adherence to its rules, Lance Reddick as the hotel manager, and Bridget Regan as a friendly bartender.

The film’s theatrical aspect ratio of 2.40:1 is faithfully reproduced in this 1080p transfer using the AVC codec. Sharpness is exceptionally strong throughout with lots of detail to be seen in faces, clothes, and hair. Color is slightly desaturated but nevertheless effective in giving the film a cold, steely look. Black levels are good, but there is occasional crush in the shadows in a movie which mostly takes place during the night. The movie has been divided into 16 chapters.

The Dolby Atmos sound mix (decoded on my equipment as Dolby TrueHD 7.1) is superb from beginning to end with frequent pans across and through the soundstage with the many firefights and weapon discharges pinging appropriately in the fronts and rears. A selection of rock and hip-hop tunes along with background score by Tyler Bates and Joel J. Richard fill the fronts and rears at appropriate times. Dialogue has been well recorded and has been placed in the center channel.

Dolby Atmos: I watched in Dolby Atmos using a 7.2.4 system (4 ceiling speakers). This was a very immersive mix that placed more general audio content including the score in the height channels that most Atmos titles. They made good use of the height for general location ambiance sounds, and for certain direction effects like rain, gunshots and other action related sounds. Overall an excellent Dolby Atmos presentation. -- Adam Gregorich

Calling in the Cavalry (11:58, HD): Chad Stahelski, David Leitch, and Derek Kolstad talk about the importance of casting the picture with the right actors. We also see the initial table read of the script and hear sound bites from co-stars Keanu Reeves, Willem Dafoe, and Adrianne Palicki.

Destiny of a Collective (6:19, HD): directors Chad Stahelski and David Leitch talk about how the opportunity came about to helm their first movie after having been in the stunt supervising business. Their work is praised by stars Keanu Reeves, Willem Dafoe, John Leguizamo, and Michael Nyqvist.

The Red Circle (6:26, HD): production designer Dan Leigh describes his thoughts about the layout of the gangsters’ nightclub The Red Circle, and Keanu Reeves and Daniel Bernhardt discuss their first of two memorable fights that take place there.

NYC Noir (6:00, HD): production designer Dan Leigh praises the use of New York City locations to give the film a very unique look since they emphasized locations that were either new or old giving a variety to the looks of individual scenes. Writer Derek Kolstad and actors Dean Winters, Adrianne Palicki, and Bridget Regan also praise the various locations used in the movie.

DVD/Digital Copy/Ultraviolet: disc and code sheet for either iTunes or Ultraviolet enclosed in the case.

An excellent, uncomplicated thriller is John Wick, superbly crafted and efficiently photographed and edited for the maximum in action impact. The Blu-ray release features near reference picture and sound in a package that gets a hearty recommendation.

I went into this with no expectations and despite a difficult to watch scene it was a great movie. They are currently filming a sequel in NYC. I recommend this for anyone who can handle movies with a high body count.
You must log in or register to reply here.