Jobs downloads its app to Blu-ray with an edition that’s as lightweight as both the movie and the latest iPad. The movie itself is a superficial overview of the life of Steve Jobs, making some cursory and obvious points along the way of showing a kind of “greatest hits” in the evolution of Apple Computers. Some of the performances along the way have good moments, particularly Dermot Mulroney and Lukas Haas. But the lead performance by Ashton Kutcher is sadly lacking, and the direction by Joshua Michael Stern is shockingly inept. The new Blu-ray presents the movie with solid picture and sound, along with a skimpy array of extras and one of the most unintentionally revealing commentaries ever presented on disc. 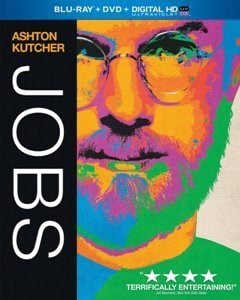 Jobs is presented in a 2.35:1 1080p VC-1 encode (@ an average 31 mbps) that excels in bringing Russell Carpenter’s lush camera work to the home theater. On a technical level, this is a lovely transfer, full of warm colors and plenty of texture. Of course, the level of detail also reveals the inadequacy of the makeup work on the “older” Steve Jobs. But that’s not a problem with the transfer.

Jobs gets an English DTS-HD MA 5.1 mix (@ an average 3.2 mbps), which mostly lives in the front channels, but uses the surrounds for the many period songs included along the way.

Jobs includes a small array of special features, including a commentary, some deleted material and a few quick featurettes totaling less than 10 minutes. The Blu-ray packaging includes the DVD edition as well as instructions for obtaining a digital or Ultraviolet copy.Feature Commentary with Producer/Director Joshua Michael Stern (AVAILABLE ON BOTH BLU-RAY AND DVD) – A scene-specific commentary is provided with Joshua Michael Stern, and it’s much more informative than I believe Stern intended. He spends a lot of time reacting to the scenes and complimenting the work of the various actors onscreen, as one might expect. He also takes the time to point out that his method of showing Jobs’ earlier years was to emphasize his own interpretation of the 1970s and to use as many lense flares as possible! He talks about how he didn’t really want to go all the way in showing the 70s as people tend to in current movies, but at the same time, he admits he went for a modified look that isn’t really 70s either. He frequently discusses the potential backstory behind ideas like finding Jobs sleeping on couches or auditing classes at college, without realizing that he hasn’t really examined those ideas onscreen. Stern notes that he completely glossed over the whole period of Jobs’ life where he reconciled with his daughter, got married and grew up a bit, because it was felt that this wouldn’t be interesting! So Stern instead tries to defend the idea that he summed up all of this material with a few intercuts of Jobs gardening, and then reminds the viewer that he’s going to inflict a few more lense flares. Frankly, this may be one of this most inadvertently revealing commentaries I’ve ever heard – even more so than Francis Ford Coppola’s angry comments on the commentary for The Godfather Part III. It’s the kind of commentary where the listener repeatedly slaps their forehead and says “He did NOT just say that…”Deleted Scenes (3:31 Total, 1080p) (AVAILABLE ON BOTH BLU-RAY AND DVD) – Three bits of deleted material are thrown in here, totaling about 3 ½ minutes. There’s a further argument with one of Jobs’ girlfriends that just gives Ashton Kutcher another opportunity to present Jobs yelling at someone who cares about him. There’s a quickie moment of Jobs returning to Apple in the 1990s and dealing with a couple of guys in a cubicle. But other material, which might have been interesting, is not included. In the commentary, Joshua Michael Stern mentions a sequence about the creation of the “Blue Box”, which might have been something to affect later innovations – but this sequence is not present here. The three quick scenes on the disc can only be viewed as a group affair – there is no “Play All” option.Ashton Kutcher is Steve Jobs (2:28, 1080p) (ABAILABLE BOTH ON BLU-RAY AND DVD) – Here we get into another annoying idea. This featurette is really just a minute and a half long, once you take out the various clips from the movie that buttress it. It’s really just an opportunity for the creative staff and Ashton Kutcher to share a couple of soundbites about their work. Given that there are three of these little pieces on the disc, you’d think they’d spare everyone the time and just combine everything into one little featurette.The Legacy of Steve Jobs (2:47, 1080p) (ABAILABLE BOTH ON BLU-RAY AND DVD) – The second of the mini-featurettes gives the guys an opportunity to talk more generally about Steve Jobs, in the midst of various clips out of the movie that extend about a minute of soundbites out to nearly three minutes of EPK time.Jobs: Behind the Score (3:22, 1080p) (ABAILABLE BOTH ON BLU-RAY AND DVD) – The third mini-featurette at least gets into mildly interesting territory. This is a quick glimpse at the work of John Debney to compose a score that would fit the character and the movie. The score ranges all over the place, sometimes evoking 60s and 70s folk music, and sometimes echoing the work of Philip Glass. Debney doesn’t have much of an explanation for this, but he does note that he was trying to find a “noble” theme for Steve Jobs. Again, this could have been rolled into the earlier featurettes and they could have just had one featurette running about 7 minutes, if even that.DVD Edition – Included in the Blu-ray packaging is the DVD edition of this movie. It presents the movie in standard definition anamorphic widescreen with a Dolby Digital 5.1 sound mix (@ 448 kbps). The DVD carries over all the bonus features, albeit in standard definition.Digital/Ultraviolet Copy – The packaging has an insert that contains instructions for downloading a digital or ultraviolet copy of the movie.The movie and special features are subtitled in English, French and Spanish. The usual pop-up menu is present, including a complete chapter menu.

Jobs is sadly not the in-depth examination of the man behind Apple Computer that viewers might have expected from the trailers and the advertising. It’s a much slighter affair, bringing far fewer rewards than one would wish from a movie running over 2 hours long. The Blu-ray at least presents the movie with solid picture and sound, and the commentary from the director is informative as to how things went this far off course. But unless the reader is looking for a case study in how NOT to make a biopic, I would recommend skipping this one and waiting for the Aaron Sorkin movie in the pipeline.