Swinging London served as the basis for a great many character studies in the 1960s. Some like Darling, Georgy Girl, and Alfie are still fondly remembered while others like Michael Sarne’s Joanna have faded from cinematic memory. At the time, the film was considered eccentric and hip, and the director made a strong enough impression on Fox executives to be assigned one of their upcoming plum projects: Gore Vidal’s Myra Breckinridge. While that latter film turned out to be an artistic and commercial disaster, the director’s two back-to-back efforts certainly are kissing cousins of one another, both focusing on unique individuals who dance to the beat of their own drums. 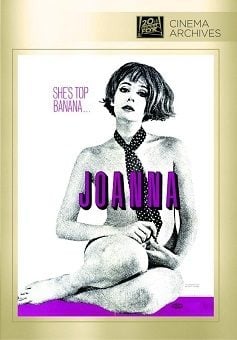 Leaving home to pursue art studies in London, Joanna (Genevieve Waite) is excited to finally have freedom to do as she pleases. She falls in with a hip crowd of swingers who party most of the time, steal the things they need to live like clothes and food, and hook up with as many men as she can handle. Joanna’s artist mentor Hendrik Casson (Christian Doermor) is her first conquest (it doesn’t matter to her that he’s married and a father), and she moves on to a cute member of her young set Dominic (David Scheur), her best friend Beryl’s (Glenna Forster-Jones) boy friend Lord Peter Sanderson (Donald Sutherland), and then to Beryl’s brother Gordon (Calvin Lockhart) who proves to be the love of her life and the man who impregnates her (her idea). But Gordon’s underworld operations make him a risky love object since hoodlums are always on his tail, and the police are always one door knock away from arresting him.

Director Michael Sarne’s screenplay focuses on the most vacuous, shallow group of people to spend almost two hours with, and apart from a slick operator like Gordon, there doesn’t seem to be an ounce of intelligence to spread around the lot of them making for an overextended romp that doesn’t really seem worth the effort. Sarne spends an inordinate amount of time watching these aimless nincompoops at play in a colorfully extended sequence in Morocco and in a series of montages set to a series Rod McKuen tunes (“Aren’t You Glad You’re Alive,” “What I’d Give for Yesterday,” “When Joanna Loves Me”) capping the film with the entire cast dancing together on a train platform to the film’s bracing title song while the leading lady cavorts (it can hardly be called dancing) in front of them. But character development is paltry, and Sarne attempts to distract us from his lack of writing craft by filling his film with cinematic tricks: drifting into and out of fantasy sequences at the drop of a hat, double exposures, negative printing, jumping from black and white (the opening credits) to vivid color (on Joanna’s entrance) and then monochrome again (during the death of one of the characters), colored gels over the lens, odd wipes to end scenes, pulling the main camera back to reveal the boom mic and a camera shooting the movie, and then that surreal musical number to end the film. It all must have seemed terribly hip and avant garde at the time, but it comes off as pretentious fluff now without a trace of real substance and grit.

Genevieve Waite plays the title role, a kind of blank-eyed innocent with a kewpie-doll voice (sort of the British version of Jennifer Tilly but without her ironic spin on line readings) who meanders through life taking what she wants and regretting nothing. Her 1960s Carnaby Street wardrobe is certainly eye-popping along with the overly made-up eye designs she shares with co-star Glenna Forster-Jones, those creations far more memorable than the performances of either of these ladies. The men in their lives fare somewhat better. Christian Doermor as the artist and Calvin Lockhart as the nightclub owner/hood both have charisma to burn and give good accounts of themselves. Donald Sutherland’s Lord Sanderson, sweet and frail, may singsong his dialogue a bit too much, but he’s another one you’ll remember fondly after the film concludes. Marda Vanne steals all of her early sequences as Joanna’s grandmother who becomes increasingly mortified by Joanna’s lack of motivation and drive to make something of herself in London.

Here’s another Fox Cinema Archive pan and scan (1.33:1) abomination of a Panavision (2.35:1) original. The opening and closing titles, of course, are squeezed to fit the Academy ratio frame, and then the remainder of the film in between crops away nearly half of the picture and blows up the rest making sharpness a forgotten entity and often missing key inhabitants of scenes due to the cropping. Color hasn’t been horribly affected with hues strong (the ladies’ fashions are all in bright, pop-art colors) and skin tones accurate but with black levels only average. There is a great deal of dust and dirt specks and debris present in this ancient television print which has been used for this transfer. The film has been divided into chapters every ten minutes so this disc contains 12 chapters.

The Dolby Digital 2.0 sound mix is decoded by Dolby Prologic into the center channel. Dialogue comes through with clear and precise style and is never compromised by Rod McKuen’s music or the atmospheric effects which are used sparsely. The songs themselves have a surprising amount of fidelity for elements of this age and are the best things about the movie. Age-related problems with hiss, crackle, and flutter have been held to a minimum.

Swinging London of the mid-to-late 1960s gets a nice display in Michael Sarne’s Joanna, but Fox Cinema Archive’s pan-and-scan representation of the original Walter Lassally cinematography hardly does it justice and is another demoralizingly poor release of a vault title for the company. The film itself is quirky and not without some minor appeal, but this made-on-demand disc is not the way to see it.

If your bluray player can play Region 2, you'd be better off with this, loaded with tons of extras, here from Amazon UK:

I enjoy this movie. One of my uncles married into a family where(literally) the women are all college educated, but have never worked and are taught how to get stuff without money.

One of those women is my cousin up here...married to a doctor. Doesn't do a thing all day long. Except swipe plastic...that is when she actually had to go somewhere...other than her iPad to buy it.

One of her cousins(the other direction...) and I "dated" in college. It was more, whatever carrot I had...that she wanted some of.