Iconic actor James Dean's short filmography consists of three films, two released after his tragic death in September of 1955, and all released over a year and a half period between March of 1955 and October of 1956. In 2005, Warner Bros compiled his collected cinematic works into a 6 DVD box set called The Complete James Dean that seemed to cover things quite thoroughly. For this seven disc Ultimate Collector's Edition, Warner not only upgrades the film presentations to Blu-ray high definition, but adds three SD DVDs filled with additional supplemental content and bundles it together in deluxe packaging inclusive of some physical extras. 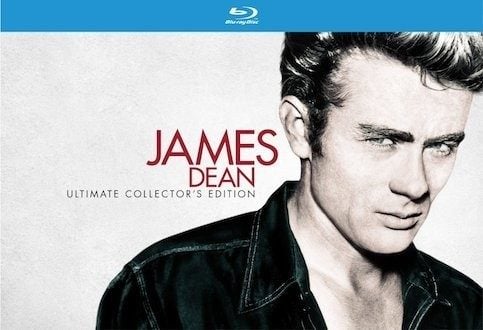 East of Eden (1955 - PG - 117 Minutes)Directed by: Elia KazanStarring: James Dean, Julie Harris, Raymond Massey, Jo Van Fleet, Richard Davalos, Burl IvesEast of Eden adapts approximately the last third of John Steinbeck's novel of the same name, telling the story of Cal Trask (Dean), the troubled young son of a father, Adam (Massey), from whom he is consistently thwarted in his bids for his father's affection in World War I era Salinas, California.In James Dean's tragically truncated film career, all three of his films were made for iconic Directors. Elia Kazan's East of Eden was Dean's first feature performance and is my personal favorite. It holds up well not just because of Dean's mesmerizing performance as the conflicted Cal Trask, but also because of consistently great supporting work from actors such as Julie Harris, Raymond Massey, and Jo Van Fleet. As a director, Kazan had a knack for drawing nuances out of actors, and would carefully cast actors in parts large or small for maximum effect. Kazan also wisely chose to focus on the novel's final act rather than try to capture its epic multi-generational scope in a single feature film. The family conflict at its center is the stuff of classic drama and more than enough to fill a feature length film.Rebel Without a Cause (1955 - PG-13 - 111 Minutes)Directed by: Nicholas RayStarring: James Dean, Natalie Wood, Sal Mineo, Jim Backus, Ann Doran, Corey Allen, William Hopper, Edward PlattRebel Without a Cause finds Dean in a contemporary (for 1955) setting playing Jim Stark, another troubled teen sliding towards juvenile delinquency as he lashes out at the world in frustration due to a dysfunctional family and lack of acceptance at his new school.Despite and maybe because of its at the time contemporary setting, Rebel Without a Cause plays a bit more dated than East of Eden. That being said, it certainly plays better today than most entries in the juvenile delinquent genre from the 1950s. An early scene where Dean's character Jim has an explosive outburst at his squabbling parents suggests that the melodrama may be headed over the top, but Director Nicholas Ray retroactively earns this indulgence as the film plays out. Honest to goodness teenagers Natalie Wood and Sal Mineo play kids with their own set of hangups and function well with Dean as they form a kind of surrogate family as the film progresses.Giant (1956 - G - 201 Minutes)Directed by: George StevensStarring: Elizabeth Taylor, Rock Hudson, James Dean, Carroll Baker, Jane Withers, Chill Wills, Mercedes McCambridge, Dennis HopperGiant, adapts Edna Ferber's controversial novel about a Texas cattle rancher named "Bick" Benedict (Hudson), who marries strong-willed eastern debutant Leslie (Taylor). The film tracks their relationship for nearly three decades as they contend with family travails, social upheaval, and a rivalry with a former ranch hand named Jett Rink (Dean) who strikes it rich when an oil well comes in on his modest piece of property in the middle of Bick's ranch.Where Elia Kazan severely truncated John Steinbeck's epic novel East of Eden, slimming the multi-generational story down to a relatively brief period of time. George Stevens embraced the multi-decade scope of Edna Ferber's Giant with both arms. The film proved to be both a box office and critical success, culling 10 Oscar nominations including a win for Stevens as Best Director. It remains an impressive achievement to this day, but in retrospect, Stevens may have bitten off more than he could chew. The film loses quite a bit of dramatic momentum when it jumps ahead in time for its second act, introducing the audience to several new characters (or at least ones that were infants when they were introduced earlier). Stopping the film in its tracks in this way gives audience members a chance to contemplate the creaky social issues soap opera elements of the story which is not a good thing. A conclusion that shifts the focus back to the core relationship of Bick and Leslie with a touch of humor and ambiguity helps to set things aright by the end, though.

All three films are presented with 1080p AVC-encoded high definition transfers in their original theatrical aspect ratios. For East of Eden and Rebel Without a Cause, this is a very wide 2.55:1. For Giant, this is a side-matted 1.66:1.Subtle improvements are noticeable across the board from previous DVD releases of all three films, but not the kind of dramatic improvements one might hope for considering the upgrade to high definition. Limitations in the single strip color stocks of the time and poor condition of the original negatives (which likely could not have been used at all were it not for modern digital restoration tools) for the earliest two films leave grain a little heavier and the overall image a touch softer than ideal, although consistent with films of their era. That being said, better rendering of the grain structure results in a mild improvement to sharpness for ...Eden and ...Cause. Contrast is handled expertly in the digital video domain, which is especially critical for East of Eden due to Kazan's technique of strategically lighting so that sections of the CinemaScope frame are in near total darkness during key dramatic sequences.Of the three films, Giant demonstrates the most marked visual improvement over its DVD predecessor. Unfortunately, due to inherent limitations in the way the film's negative was assembled, huge portions of the film consist of soft and artifact-heavy dupe footage. Opticals, inclusive of crossfades, are rendered on an inferior dupe stock that is not only substantially softer than the standard footage in the film, but frequently exhibits pronounced "Mackie Lines", giving a bright glowing "aura" to areas of high contrast. In an effort to create more seamless opticals, the lab used the dupe footage for entire shots extending from the first hard cut before the optical until the first hard cut after it. Director George Stevens was fond of both long takes and crossfades, resulting in whole scenes exhibiting the "dupey" artifacts.

East of Eden and Rebel Without a Cause are presented with Dolby Digital 5.1 tracks derived from their original multi-track stereo soundtracks. They feature a decent stereo spread across the front three channels with only modest and occasional activity in the surrounds. The soundtrack for Rebel Without a Cause reportedly had to be assembled from the magnetic tracks of release prints, but sounds remarkably good, all things considered.Giant features a DTS-HD MA 2.0 presentation of the same 2.0 stereo track that was created for the Two-Disc Special Edition DVD release. It sounds like re-processed mono with more harm than good coming of the efforts, especially with respect to Dmitri Tiomkin's score. It is not by any means an unlistenable disaster, but it is unlikely to please fans of either stereo tracks or original mono tracks.

The James Dean Ultimate Collection Blu-ray set upgrades all three films to high definition with modest audio and video benefits compared to their 2005 SD DVD releases in the case of East of Eden and Rebel without a Cause, and a more dramatic video upgrade in the case of Giant, which is unfortunately still plagued with film artifacts inherent to its negative. All substantial extras are carried over from the 2005 DVDs, with a previously unavailable Dennis Hopper interview present as a notable addition to the Rebel Without a Cause disc. In addition to the film supplements, the disc includes three SD DVDs with documentaries, two on James Dean, and one on Director George Stevens.The collection is a no-brainer recommended purchase for fans of the actor who do not own any of the previously released DVD Two-Disc Special Editions, but for super fans who most likely already own the 2005 DVDs and documentaries on Dean and Stevens, it is not as easy of a recommendation due to the modest visual benefits (which become more significant the larger the display on which the viewer watches the films), and lack of any must-have new special features.