By the beginning of the 1980s, the miniseries truly ruled the airwaves. After such stunning successes as Rich Man, Poor Man, Roots, Holocaust, and I, Claudius, the miniseries continued into the new decade with another sensational line-up of programs. Nominated during the 1980-1881 season for the Limited Series Emmy Award were such well regarded programs as Tinker, Tailor, Soldier, Spy; Masada, and Rumpole of the Bailey. And the inevitable winner that season was a program which mesmerized many millions of viewers for five successive nights on NBC, a miniseries nominated for fourteen Emmy Awards: James Clavell’s Shogun. 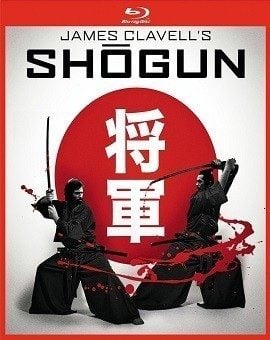 Based on the epic novel by James Clavell, Shogun starred Richard Chamberlain, who with his performance in this program continued his reign as the unofficial King of the Miniseries during the 1970s and 1980s (The Man in the Iron Mask and The Count of Monte Cristo preceded Shogun, and The Thorn Birds and The Bourne Identity would follow). He plays Blackthorne, an English pilot (later to be dubbed Anjin-san), steering a cargo ship bound for the Americas in 1598 when a typhoon washes him and his men overboard near the coast of Japan. Though a complete alien in this strange but fascinating place, he wrestles constantly with the mores of the odd land and only slowly adapts to the customs and rituals of the samurai-dominated society. He comes under the special protection of one of the island’s two reigning feudal lords: Lord Yoshi Toranaga (Toshiro Mifune). Blackthorne introduces the samurai to European customs, the knowledge of geography he possesses, and the threat to his power by the Catholic presence in his country, sent from the king of Portugal to pave the way for his eventual takeover. To aid their visitor in accustoming himself with the country, Toranaga assigns Mariko (Yôko Shimada) as his cultural attaché teaching him the language and customs and translating for him anything he doesn’t understand. She, though lovely and quite charming, is also married to the lord’s right hand man Lord Buntaro (Hideo Takamatsu), and as the attraction between Mariko and Blackthorne grows, her position grows ever more dangerous.

As is the case with all miniseries of the day, the narrative takes its time spending lengthy quarter hour sequences on character exploration and the minutiae of everyday life, all courtesy of Emmy-nominated writer Eric Bercovici. It’s this rich and robust delving into a foreign culture of centuries ago that gives Shogun much of its enduring appeal, especially since we know all of the threats that come to the leading character in the opening hours can’t possibly lead to his death. How would the producers fill in the remaining hours of running time were he to fall victim to the violence that is perpetrated against other characters throughout the series: beheadings, crucifixions, seppuku, impalings, boiling in water: just about every possible violent method of death gets its moment of glory in the epic. In fact, the many co-existing stories of various political intrigues and the clash of church and state are more interesting now than the extended romantic subplot which is sweet and earnest but not as deeply involving as perhaps it was wished. Another positive aspect of the show is that subtitles are not used to translate Japanese speech. When a translator is not a part of the scene (which is rare), narrator Orson Welles clues us in on what is being said as well as providing background information pertinent to the situations where he intervenes.

Richard Chamberlain received fine reviews, a Golden Globe, and an Emmy nomination for his work in this epic piece, but in retrospect, he seems far too American and far too modern to be wholly convincing as a 17th century British sailor. That isn’t to say that he doesn’t invest heavily in the emotional and dramatic nature of the story, but he still seems somewhat miscast (Sean Connery and Roger Moore were the producers’ first two choices, but neither was interested in a lengthy television shoot). Toshirô Mifune adds another fascinating performance to his career achievements capturing the fun, dynamism, and (ultimately) treachery of his Lord Toranaga. Yoko Shimada as the delicate Mariko seems tentative at first but slowly weaves a captivating spell that has the viewer fully appreciating her performance by the end of the story. John Rhys-Davies as the Portuguese counterpart to Chamberlain’s Blackthorne steals every scene he’s in, his every appearance pure pleasure even when he’s got nefarious, ulterior motives. Vladek Sheybal plays the scheming Captain Ferriera with directness but perhaps a slight lack of restraint, but Japanese comedian Furankî Sakai is surprisingly grounded and authoritative as the alternately supportive and jealous Yabu. Alan Badel makes an earnest Father Dell'Aqua while Damien Thomas as the enigmatic Father Alvito also makes a very positive impression over the course of many hours. We lose marvelous character actor Michael Hordern’s Friar Domingo in the first installment, but he’s quite memorable in his few scenes.

The program’s original 1.33:1 television aspect ratio is faithfully delivered in this 1080p transfer using the AVC codec. Color saturation levels and richness in delivery are the most striking aspects of this release with very natural skin tones and loads of detail in the hair, clothes, and facial features of all of the characters. Sharpness is on the whole excellent, especially in medium shots and close-ups, though long shots, especially extended establishing shots, are often soft and ill-defined. Black levels can be very good but are not consistently so, and some scenes in very darkened conditions have a bit of a digitized look about them. Still, despite occasional dust specks and a tiny bit of moiré, it’s usually a strikingly pleasing picture that’s offered for viewing.

The disc offers two English language choices: DTS-HD Master Audio 5.1 and lossy Dolby Digital 2.0 mono (which Dolby Prologic decoded into the center channel). The mono track seems fairly anemic with weak highs and no bass to speak of. While the lossless 5.1 track offers a wonderful, effective spread of the Maurice Jarre score and the sound effects across the front soundstage, there isn’t a dynamic envelopment for the listener through the rear channels. Rather they catch spillover from the fronts with the music and an occasional effect. Dialogue has been excellently recorded and has been placed in the center channel. The lack of much LFE channel usage is prevalent in this mix as well. It is, however, free from any age-related problems with hiss and other artifacts.

The Making of Shogun (1:19:51, SD): writer Eric Bercovici, director Jerry London, cinematographer Andrew Laszlo, and stars Richard Chamberlain, Yôko Shimada, and John Rhys-Davies discuss pre-production script writing, casting, location scouting in Japan and shooting in the primitive Toho Studios, working with the locals and the custom gap that existed between American crews and Japanese crews, the Emmy-winning costume designs, the building of the two ships used in the production, controversies over violence and standards, special effects work, production snafus, the post-production problems, and the program’s rapturous reception. The thirteen-part documentary can also be viewed in individual segments.

Selected Scene Commentary (SD): Emmy-nominated director Jerry London provides comments on seven selected scenes from the nine-hour production. Though he has a few anecdotes to relate, they’re all rehashed from the “making of” featurette discussed above. He also spends an inordinate amount of time describing what we’re seeing in the scene or providing story background before he gets to any real information about the filming. The scenes must be selected individually.

Rich in atmosphere but somewhat sluggish in narrative pacing, James Clavell’s Shogun is one of the most fondly remembered miniseries in television history. This new Blu-ray release offers a definite step-up in picture and sound quality from the last DVD release of 2010. For fans of the program or those who are curious enough to chance a rental, definitely recommended!

Absolutely terrific review Matt, thanks! Will keep my eye out for this one, we were captivated by it when it first aired, not sure I can set aside enough time to watch it in full again tho!

very exciting! I missed this orignally. I think ma read the book and loved the movie. And I can't even get her to watch any martial arts stuff these days.

Some TV mini-series productions were shot with 1.66 or 1.75 in mind for re-release in other markets, for example, Lonesome Dove, which works fine at 1.78. Any idea how this one might fare if one cropped it to a wider ratio?

I may have watched a little bit when it first aired, but I was in no way ready to appreciate it like I am now. Looking forward to it.

I didn't try it at 1.66:1, but I actually think it might work quite well. There seemed to be more than enough headroom to accommodate it.

I was about seven when this came out and still remember the family watching it. I can't say I've seen the whole thing, though, so I will definitely add this one to my viewing list.

For everyone lucky enough to be too young to have seen this when first shown I endorse the recomendation and look forward to a re-visit.

Anybody else received this with a Candian, bilingual slipcover from Amazon.com directly? (The keepcase underneath is 100% English).

Matt Hough said:
I didn't try it at 1.66:1, but I actually think it might work quite well. There seemed to be more than enough headroom to accommodate it.
Click to expand...

Shogun was actually edited down to a feature-length movie, and released theatrically, in some foreign markets. For many years, it was this feature-length version that was available on home video.

Just a quick addition to the Chamberlain miniseries monopoly: Centennial, which aired in 1978 and included Chamberlain in its first 4 parts out of 12.And I've got to ask as I can't resist: The Count of Monty Crisco? The only time I've heard that title was in the St. Elsewhere episode "The Count"...

Looks like the good old reliable spell checker needs to bone up on its historical fiction.

Amazon is now selling this BD release for $25.91 so I pulled the purchase trigger.
You must log in or register to reply here.