It's Always Sunny in Philadelphia: The Complete Season 8 DVD Review

The nincompoops at Paddy’s Pub continue their own unique brand of idiocy in season eight of It’s Always Sunny in Philadelphia. With the cast members of the long-running FX series (next season moving to the new FXX network) firmly in place and spreading their own brand of demented glee through ten ludicrously silly episodes, season eight is, at its best, laugh-out-loud funny, and even in the episodes which don’t quite work throughout or that fall apart after a promising beginning, there isn’t one show that’s completely lacking for laughs. 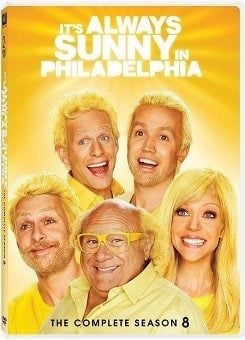 Siblings Dennis (Glenn Howerton) and Dee (Kaitlin Olson), their father Frank (Danny DeVito), and buddies Charlie (Charlie Day) and Mac (Rob McElhenney) are off on another season of wacky adventures, everything from searching frantically for a hidden Nazi treasure to a series of one-upmanship moves at a fancy Philly restaurant. Among the other hilarious plots the group gets mixed up with this season are a wedding which turns into a masterful homage of Shaun of the Dead, a psychiatrist session where each of the zanies gets examined by a befuddled doctor (kudos to Kerri Kinney for rolling with the punchlines), and the ridiculous season finale where Dennis and Frank face off against other in a mock trial that stunningly turns into a battle of evolution versus religion. Mac has lost the sixty pounds he gained for season seven, and several references to that pepper this season’s episodes. Also, unlike previous seasons, there are no two-part episodes.The four younger members of the cast plus veteran Danny DeVito are so experienced with their roles now that playing these child-adults one step above morons is entirely effortless, and their ensemble camaraderie and the obvious improvisation going on, essential for the comedy to work when the jokes are lame, is exemplary. True, a little of Danny DeVito can go a long way (he loves stuffing food in his mouth and then talking spraying masticated bits in all directions, but it’s all in the service of laughter and with fewer episodes in this season’s output, there is less of him to endure this year). On the other hand, Charlie Day has been given a little more to do this season, and he’s frequently the funniest member of the cast.Here are the ten episodes from season eight spread over two DVDs in this package. The names in parentheses refer to the participants in the audio commentary for that episode:1 – Pop-Pop: The Final Solution (Glenn Howerton, Charlie Day, Rob McElhenney)2 – The Gang Recycles Their Trash (Glenn Howerton, Charlie Day, Rob McElhenney)3 – The Maureen Ponderosa Wedding Massacre (Glenn Howerton, Charlie Day, Rob McElhenney, editor Josh Drisko)4 – Charlie and Dee Find Love5 – The Gang Gets Analyzed (my favorite episode of the season)6 – Charlie’s Mom Has Cancer (Glenn Howerton, Charlie Day)7 – Frank’s Back in Business8 – Charlie Rules the World9 – The Gang Dines Out10 – Reynolds Vs. Reynolds: The Cereal Defense

The 1.78:1 television aspect ratio is presented in anamorphic widescreen. Even though Fox chose to send DVDs rather than Blu-rays for review, the sharpness is quite exemplary throughout the run of the season. Colors are stable and consistently hued, and flesh tones are natural and appealing. Apart from some minor moiré, there are no visual artifacts to spoil the visual presentation. Each episode has been divided into 5 chapters.

The Dolby Digital 5.1 sound mix is more stereophonic than surround in nature. The rear channels capture some echoes of the music which offers an ironically lush sound to contrast with the crass and classless endeavors of these loons. Ambient sounds don’t get much attention in the surround sound mix. Dialogue has been securely recorded and has been placed firmly in the center channel.

Audio Commentaries: four episodes contain commentary tracks (see above list for participants), but they don’t really add much information to the proceedings with the guys seeming to be merely going through the motions rather than giving any kind of detailed information about shooting that particular episode. Only obsessive fans of the show will find these very edifying.Three Deleted Scenes (4:40, SD): presented in montage formLady House: The Lost Premiere (6:17, SD): a deleted subplot featuring the TV moms of Charlie and Mac in a sitcom with accompanying laugh track.Frank Reynolds: How to Be a Warthog (1:33, SD): Frank Reynolds (Danny DeVito) offers video tips for business success.Fat Mac: In Memorium (2:05, SD): cast members (not in character) comment on the differences between Slim Mac and Fat Mac.Promo Trailers (SD): FX dramas, Archer.

Moronic comedy can be good for one’s constitution every once in a while, and even though this season isn’t up to the best of the episodes during the show’s long run, It’s Always Sunny in Philadelphia offers both inanity and wit in this season eight package.