I've tried to connect my new Sony UBP-X700 to my WIFI network. When I scan for available networks, my home network shows up. BUT for some reason the machine is insisting this network is not security protected (see photo). Because of this the player doesn't ask me to enter a password to connect to the WIFI, so of course the connection fails. My network IS password protected. I've reset the modem and rescanned with the player - same result. I've connected the player to the internet via my iphone hotspot without any problems and made sure I've the latest firmware, which I do. Anyone know what's going on here?
Many Thanks 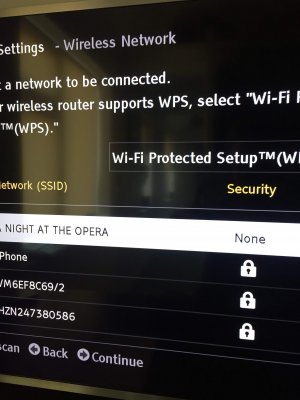 That's a new one. I have that player, but I've never had that problem with it. Found my home network just fine and locked in securely.

Is it possible that your modem has lost its security settings?

Edwin-S said:
Is it possible that your modem has lost its security settings?
Click to expand...

Every other piece of equipment I have from Iphone to Sonos speaker recognises the network as secured and asks for the password. I've never encountered this issue before, its perplexing.

I had a similar issue with my X700 when I initially set it up. Couldn’t get a network connection to run the streaming apps.

Anyway the new Roku Ultra made this a moot point.
D

The wifi problem I'm having with it is every time I turn on the player I have to manually reconnect it to Wifi. It won't connect to the update servers until I do. Very annoyong
You must log in or register to reply here.