Investigation of a Citizen Above Suspicion Blu-ray Review

XenForo Template Investigation of a Citizen Above Suspicion Blu-ray Review

In Elio Petri’s Investigation of a Citizen Above Suspicion, societal and political institutions come under the filmmaker’s satiric microscope in coruscating detail combining into a fascinating, sometimes funny and sometimes bitter, indictment of the status quo. With a galvanizing star performance by Gian Maria Volonté and a jauntily eccentric background score provided by the great Ennio Morricone, the film despite its age still plays with a fresh, modern kick that makes it something of a remarkable and quite notable achievement. 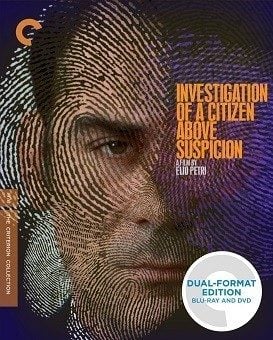 The Chief of the Homicide Bureau (Gian Maria Volonté) in a Rome police precinct murders his mistress Augusta Terzi (Florinda Bolkan) and leaves plenty of clues around her apartment implicating himself. As he’s moving up to the higher ranked role of Chief of the Political Division, he’s interested to see what kind of progress his successor Mangani (Arturo Dominici) will make on the case. Augusta’s estranged husband (Massimo Foschi) is naturally brought in for intense questioning, and the Chief masterminds the finger being pointed at a young radical (Sergio Tramonti) who lives in the same building and who had been seen by the Chief dallying with Augusta.In his script (written in collaboration with Ugo Pirro), Elio Petri has focused as much on police corruption and an almost fascist mindset in the department as he has with his twisty plot which finds the clever Chief as much as confessing the crime to the faces of his subordinates and almost defying them to try to make a case against him. Though the Chief (he’s never called by any other name in the film) and Augusta seem to be in love, flashbacks reveal the extent of their relationship going from initial attraction to erotic sex games based on actual crime scenes and then to the point when their affair begins to sour when she begins assuming the more aggressive role in their dynamic and thus leading to his motive for murdering her. It’s all accomplished as smoothly as skates on ice even filled as it is with the societal satire and anti-establishment rhetoric for which Petri, a fervent Communist, is known. And as Petri takes his constantly moving camera around various areas of the police department (a surveillance room where hundreds of phone taps are being monitored is quite fascinating, for example) and elsewhere around a very disguised Rome to keep it anonymous, one can’t help feeling at once both exhilarated and disgusted by this unsullied assault on the class system allowing certain citizens to be above the law no matter what they do. In our current century, it’s a theme that has been explored in countless films and television dramas (as well as in real life, of course), but it was certainly a startling theme in cinematic storytelling and commentary in 1970, a time when civil unrest had pretty much swept across the civilized world.Gian Maria Volonté is riveting and charismatic as the authoritarian police chief hectoring his underlings like a neo-Mussolini and grinning snake-like as he manipulates evidence and thus the focus of the case from one innocent dupe to another. Florinda Bolkan as the murdered lover gets to display a nicely arcing range of emotions as her character grows in surety and power as the sexual politics of their relationship changes. Massimo Foschi as Augusta’s husband, possibly a homosexual though that is never proven and is merely a supposition by the Chief and others, has a wonderfully etched interrogation scene. Arturo Dominici and Orazio Oriando as police officials who move up the ladder with the Chief’s promotion but who nevertheless feel like his lapdogs make very positive impressions as they at first squirm under his manipulations and later have their eyes opened as the truth surfaces.

The film’s theatrical 1.85:1 aspect ratio is presented in a 1080p transfer using the AVC codec. Restored by Grover Crisp and his staff at Sony, the image is pristine throughout with nothing about the transfer to suggest its four-plus-decade age. Scenes meant to be softly focused are still that way while the majority of the film retains that stark sharpness typical of films from the late 1960s/early 1970s. Color is true throughout with appealing and natural flesh tones. Black levels are excellent in this very film-like transfer. The white subtitles are always very easy to read. The film has been divided into 13 chapters.

The PCM 1.0 (1.1 Mbps) sound mix is also very typical of its era. The movie was post-synched, so there is that flat, arid quality with the dialogue that is always noticeable in films of this sound era. On the other hand, Ennio Morricone's most engaging and quirky score is a treat throughout with just enough bass to make it agreeable to the ear. The dialogue is never compromised by the music or Foley effects in the mix.

Elio Petri Interview (14:32, HD): in a 1970 interview with the director for French television, Petri elaborates on the theme of the film and discusses how his political and societal views influence the projects he chooses and his methods of treating them.On Investigation (24:33, HD): film historian Camilla Zamboni offers a critical analysis of the movie and of Petri as a filmmaker through references to many of his other works.Elio Petri: Notes about a Filmmaker (1:19:51, HD): a 2005 documentary about the life and work of the director featuring comments from many of the cast and crew of his films and comments from his fellow directors and producers who reference specific aspects of his career. The documentary also features many film clips from his award-winning works.Investigation of a Citizen Called Volonté (54:46, HD): a 2008 documentary on the life and work of actor Gian Maria Volonté including comments from his colleagues, archival interviews with the actor, and clips from his films.Music in His Blood (19:00, HD): a 2010 interview with composer Ennio Morricone by Fabrio Ferzetti in which the maestro discusses the four films he scored for director Elio Petri.Theatrical Trailers (6:11, HD): two trailers – one Italian, one English-language – for the film presented in montage form.Thirty-Three Page Booklet: includes the chapter listing, the cast and crew lists, some color stills from the film, author Evan Calder Williams’ overview of director Elio Petri’s career and an analysis of the movie, and excerpts from screenwriter Ugo Pirro’s autobiography which pertain to the movie.Timeline: can be pulled up from the menu or by pushing the red button on the remote. It shows you your progress on the disc and the title of the chapter you’re now in. Additionally, two other buttons on the remote can place or remove bookmarks if you decide to stop viewing before reaching the end of the film or want to mark specific places for later reference.DVD Copy: enclosed in the case of these dual-format editions.

Winner of the Academy Award as Best Foreign Film of 1970 and the Special Jury Prize at Cannes, Investigation of a Citizen Above Suspicion is one of those films which has escaped the era in which it was made and emerges as a fresh and vital piece of cinematic art. The generous selection of bonus material included with the set also offers an in-depth look at the man behind this marvelous political satire. Highly Recommended!