Insomnia (1997), Director Erik Skjoldbjærg’s debut feature, is an absorbing and isolating narrative. Bright and harshly lit settings wash the dark and brooding subject matter – a brightness born of the endless midnight sun of the location setting. The story of death, lies, mistakes and secrets, is thoroughly original and unexpected, featuring a forceful performance by Stellan Skarsgård (Thor, Good Will Hunting.) Remade in 2002 by Christopher Nolan (Inception,) with Al Pacino and Robin William’s in the lead roles, the original is more assured and unsettling than the American recreation. 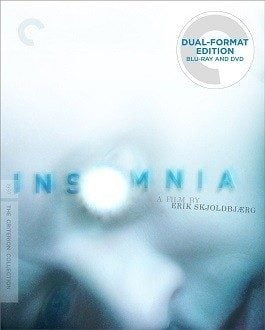 “You get used to it. You just have to avoid mixing your job with your personal life…”

A murder in Northern Norway city of Tromsø is attended by two seasoned detectives from Sweden, the reticent, stern Jonas Engström (Stellan Skarsgård,) and the friendly, if easily distracted, Erik Vik (Sverre Anker Ousdal.) Tromsø is in the season of endless daylight – where the sun never falls below the horizon, night is like day and the day never ends. Engström struggles with the midnight sun, unable to sleep, unable to rest. His tiredness wearing down his resolve. But the investigation goes on. The victim was a schoolgirl, Tania, who had been the recipient of expensive clothes and the attentions of a wealthy suitor. Her boyfriend is the obvious suspect, but Engström’s instincts tell him otherwise. Matters are complicated when Engström accidentally shoots and kills his fellow officer and friend Vik, in the fog of a sting operation. He chooses to conceal his fault, blaming instead the man they were pursuing, the key suspect in the murder of the girl. A local detective, Hilde Hagen (Gisken Armand), with whom Engström shares an attraction, is assigned to investigate Vik’s death. And his secret soon begets lies, and his lies beget a woven story of half-truths that he struggles to stay ahead of.

Director Erik Skjoldbjærg’s debut is a strong piece of cinema; turning secrets and guardedness, normally allowed to hide, brood, and be consumed by the shadows, into a stunning internal drama, under the unrelenting glare of the midnight sun in the Norwegian arctic. Skjoldbjærg’s screenplay, co-written with Nikolaj Frobenius, provides a cold, methodical crime drama, wrapped in an isolating narrative that drives Engström’s deception and descent. It is the brightest film noir you are likely to see.

Insomnia is expertly paced. Moving briskly from the arrival of the detectives to the first sharp and unexpected turn of events, the film allows the story’s central crime to shift out of the fore – but remain a driving element. And no sooner do we adjust to the shift, the investigation turns to a local crime author, Jon Holt (Bjørn Floberg), and with this development the film again stridently shifts from expectations, and proves itself to be a bold, unpredictable piece of storytelling.

Insomnia also heralds a blisteringly taut turn by Stellan Skarsgård, as he maneuvers the anti-hero detective character between the lines of reason and morality, allowing his Engström character to stagger a descent into an unrevealed personal madness. His insomnia, under the light from which he cannot seem to hide, causes him to see things, fall prey to a wandering imagination, with visions that betray his inner demons. It’s marvelously restrained and unraveled at the same time. Gisken Arman’s Officer Hagen is a fine supporting performance as she balances the cold truths of detective work with a demure quality, attracted to Engström, subtly flirtatious but committed to the investigation. Sverre Anker Ousdal’s relatively short turn as Erik Vik leaves a mark. A likeable, warm detective – quite the opposite of Skarsgård’ seemingly joyless Engström. He adds during his time a lightness to scenes that allows the darkness following his demise to become more pronounced. Bjørn Floberg’s crime author Jon Holt is agreeably unusual. Suspected of murder, he opportunistically takes advantage of the pursuing detective’s mortal mistake, but the power he is able to lord over Engström isn’t merely a means to an end – it produces a curious ballet of mutual interest and Floberg’s demeanor and novice experience here are produced in fine form.

Insomnia features thoughtful, assured, and precise direction, partnered with cinematography by Erling Thurmann-Andersen that creates cold spaces and paints scenes with harsh lights and muting colors. Within the cool and moody locations, these filmmaking skills create an unusual setting against which this bright ‘noir’ unfolds.

Insomnia, presented in its original 1.85:1 aspect ratio, is stunning in high definition. The harsh, at times bleached palette of the production would be ripe for revealing unwanted digital tinkering, sharpening and other ‘enhancements,’ but no such faults are present. What we have, digitally transferred, created in 4K resolution “on an ARRISCAN film scanner from the 35mm original camera negative,” offers terrific detail. The opening shot of the two Swedish detectives on the arriving flight to Tromsø reveals of skin pores, corduroy jacket fibers and brightness that doesn’t bloom.

Dirt, debris, scratches etc., have been manually removed (as is common in the process for Criterion releases) and the pristine image is near-flawless.

Criterion offers Insomnia with the original 2.0 surround soundtrack, remastered at 24-bit a 35mm LTRT magnetic track. As with the image, problems (clicks, thumps, hiss, etc.,) have been manually removed. The audio provided is in Norwegian and Swedish with English subtitles.

Of the mostly atmospheric audio, punctuated by dialogue (and the finale fracas,) the greatest joy here is listening to Geir Jenssen’s darkly toned soundtrack. Much like David Julyan’s bleak, electronic score for the Christopher Nolan 2002 remake, the music offers an underlying sense of tension and, at times, a dazed pulse as backdrop for Engström’s insomnia-driven disorientation.

Noted in the accompanying booklet regarding the audio: “Please be sure to enable Dolby Pro Logic decoding on your receiver to properly play the Dolby 2.0 surround soundtrack.”

Two Short films by director Erik Skjoldbjærg: Two interesting short pieces from his time at the National Film and Television School in London, they are demonstrative of Skjoldbjærg’s technique and confidence behind the camera (with excellent framing, particularly in Close to Home.)Trailer

The parallels drawn in the story between the killer and Engström’s actions to cover his tragic mistake are a fascinating deviation from the standard crime and detective drama. The compelling nature of this film comes from the creation of the internal drama; the turmoil and compulsion of self rather than the outward dramatic narrative elements. Fine filmmaking create the space for this internal drama to play out, but it is Stellan Skarsgård’s portrayal that give it weight and angst. Certainly the external events create, then compound, the inner struggles of Engström, but they did not create who he is or his natural inclination to see himself as outside the rule of law. And that reality sets Insomnia apart. Recommended.

I'd been very much looking forward to seeing this original version when I bought the Criterion DVD several years ago. Well, it was perfectly good and all that, but it didn't quite blow me away like I'd expected it to.

Last week I popped in the Blu-ray for just a quick look (my practice with everything new, whether I'm going to be watching it right away or not), and I'll use the same word Neil used above: I was stunned. Everything looked and sounded incredible, but the damned thing was pulling me in, right from the get-go. Couldn't watch right then, but I'll be back to do it properly within a couple of days.

I'm so looking forward to getting this. Used B&N's half off sale, but of course the free shipping is much slower than Amazon prime, so mine is still "in transit" though according to the latest update it should be out for delivery within the next day.

Watched tonight, and am thrilled to have this one.

Haven't watched the two short films yet, but the new conversation between director and actor is wonderful. It's only 20 minutes in length, but there's not a wasted word and I found it fascinating and totally worthwhile.