Inside Out 3D Blu-ray Review

The most sophisticated and adult film yet in the magnificent string of Pixar creations, Inside Out is another of the studio’s marvels of humor, humanity, and heart. With a story that almost any adult can readily identify with either as a parent now or as a former child and with enough of interest for the smaller fry in the household, too, Inside Out proves once again to offer a little bit of something for everyone and marks another feather in the cap of the Pixar magicians. 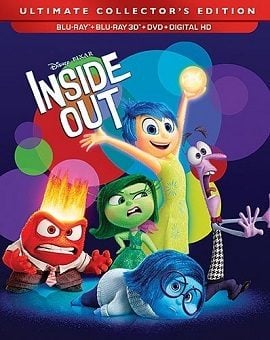 keep case with leaves in a lenticular slipcover

Having lived a life of relative happiness for eleven years, little Riley (Kaitlyn Dias) and her parents (Diane Lane, Kyle MacLachlan) pull up stakes from Minnesota for her father to start a new business in San Francisco. This disruption in her normal life causes her mind’s emotional center to run frantically amok. Until now, Riley had been mostly spirited through life by Joy (Amy Poehler) with the emotion doing the heavy lifting for the youngster leaving other emotional masters like Sadness (Phyllis Smith), Anger (Lewis Black), Fear (Bill Hader), and Disgust (Mindy Kaling) basically playing minor roles in her maturation, but now on the verge of becoming a teenager, more complicated mixtures of her five emotional components are necessary, something Joy is having a devilishly hard time accepting. What’s worse, the bumbling Sadness stumbles around enough to have her and Joy accidentally transported out of the mind’s headquarters leaving only the three more negative emotions there to cope with Riley’s growing dissatisfaction with her new life and her growing desire to run away back to the home she loves and misses. Joy is frantic to get back to the command center hopefully to right the ship, but the road back is a long and treacherous one that will require Joy to learn a few things about the world so she can better guide Riley as she becomes an adult.

The screenplay by Pete Docter, Meg LeFauve, and Josh Cooley is actually a complex tapestry of science and imagination, and the pictorial representations of Riley’s Mind: the headquarters for her emotions, her personality islands established by the strongest facets of herself (her family, her goofiness, her interest in hockey, her friendships), her abstract thoughts, her train of thought, her core memories, long-term memories, fading memories, and subconscious thought are so imaginatively conceived and executed that seeing the film multiple times will be a must to fully appreciate the genius behind the concepts and the executions of this one-of-a-kind animated movie. There’s a treasurable moment on her way back to headquarters where Joy, Sadness, and Riley’s imaginary friend Bing Bong (a cotton candy elephant-like creature voiced by Richard Kind) take a short cut through Riley’s abstract thoughts which, as they go deeper into the chamber, change from 3D to 2D to 1D (one of the most effective sequences in the 3D version) that Illustrates the enormity of creativity that’s garrisoned at Pixar. But that’s just one example of the delightfully unexpected marvels that await a first-time viewer, and further discussion of the twists and turns of the lengthy, treacherous trip back to home ground might spoil the many surprises which await the curious. But, there’s no surprise that this film, like almost all of Pixar’s efforts, places the greatest value in lessons that touch both the brain and the heart with Joy (and us viewers) learning that a successful life can’t be only about happiness and, in fact, must cede more quality time than one might like to another strong emotion. Director Pete Docter had a monumental task in deciding how much to focus on the emotions and how much to show us of Riley’s world and experiences. It’s a tricky balancing act, and he’s handled it deftly.

The voice casting is sublime. Amy Poehler is a dazzling Joy, but each of the other emotions, especially Lewis Black’s Anger and Bill Hader’s Fear, have their spotlight moments where they take the show and run with it. If Mindy Kaling’s Disgust is just okay, Phyllis Smith’s Sadness begins rather irksomely with her clumsy bungling and inability to express what she’s trying to relate, but the role grows on you as the movie runs, and it’s quite a surprise when the emotion actually blossoms in the film’s final quarter. The three human characters are well acted by Kaitlyn Dias, Diane Lane, and especially Kyle MacLachlan who gives dear ole Dad a lot of personality in only a few scenes. Richard Kind is a hoot as the fuzzy pink Bing Bong.

The film has been framed at 1.78:1 for this home video release and is presented in 1080p resolution using the MVC/AVC codec. Naturally sharpness is exceptional throughout the presentation with the CG animation now able to represent fuzzy creatures and unusual hair strands with all the detail of live action filmmaking. Color is gorgeously saturated but never over-the-top, and black levels are richly deep and inky. Contrast has been consistently maintained throughout making for an incomparable picture. The movie has been divided into 28 chapters.

As with other Pixar 3D efforts, the animators are much more interested in depth than in forward projection. Depth is quite astounding in many places of the film, and characters and objects and backgrounds have been strategically placed for optimum impact (as mentioned above, the “abstract thinking” sequence is one of the highlights of the film’s animation). There is occasionally an extended arm or a foot that seems to momentarily come forward, but such effects never linger for the viewer to relish, and lots of opportunities for the colored memory orbs to float out before us or to cascade down at us aren’t exploited for visual impact.

There are three English soundtracks offered: DTS-HD Master Audio 7.1 (which was utilized for the purposes of this review), DTS-HD High Resolution 5.1 (which seems to be the default track), and Dolby Digital 2.0 stereo surround. Almost from the first moments, directionalized dialogue is a notable occurrence and is most welcome whenever it happens though most of the dialogue is in the center channel. Michael Giacchino’s sometimes sprightly and sometimes moody themes get wonderful placement in the fronts and rears, and split surround effects are also atmospherically placed for maximum impact.

Lava (7:12, 3D HD): the short which accompanied Inside Out in theaters finds a Pacific Ocean volcano singing of his desire for a companion volcano.

On the 2D feature film disc (in addition to Lava in 2D):

Audio Commentary: director Pete Docter and co-director Ronnie Del Carmen (who are joined for a time by director of photography Patrick Lin) discuss the story and its major changes over the course of its four-year production process.

The Women of Inside Out (11:22, HD): many of female members of the cast and crew including star voices Amy Poehler, Phyllis Smith, and Mindy Kaling, writer Meg LeFauve, and production supervisor Dana Murray among others describe what the importance of the story and their work on it has meant in their lives.

Mixed Emotions (7:17, HD): director Pete Docter and co-director Ronnie Del Carmen describe how their discussions with scientists and educators influenced the design of each of the emotions used in the picture.

On the 2D Bonus Features disc:

Mapping the Mind (8:24, HD): Pete Docter, production designer Ralph Eggleston, producer Jonas Rivera, co-director Ronnie Del Carmen, and others discuss their ideas for picturing the machinations of the memory for the movie.

Our Dads, the Filmmakers (7:25, HD): the daughters of director Pete Docter and composer Michael Giacchino talk about their fathers’ work from their own perspectives and watch as the film comes together near the end of production.

Into the Unknown: The Sound of Inside Out (7:09, HD): director Pete Docter, producer Jonas Rivera, sound designer Ren Klyce, and sound editor Shannon Mills discuss the difficulty of coming up with a complete sound palette from scratch for each of the Pixar movies and show some tricks of the trade to get the unusual sounds they need for certain moments in the film.

The Misunderstood Art of Animation Film Editing (4:43, HD): Pete Docter, story supervisor Josh Cooley, and film editor Kevin Nolting talk about the arduous task of cutting the film down and the placement of image and sound for optimum effect.

Mind Candy (14:26, HD): a delightful series of blackout sketches featuring the Emotion characters in a parade of sight gags and (mostly) pantomime comedy.

Deleted Scenes (16:53, HD): four story ideas that didn’t make it past storyboard stage are introduced by director Pete Docter who explains why they were excised.

An exceptional Pixar effort, Inside Out is unquestionably one of the year’s best films (an Oscar nomination for Best Picture wouldn’t be completely out of the question and a nomination for Best Animated Feature seems a foregone conclusion), a wise and witty look at the emotions which rule us all in a way that can appeal to everyone from eight to eighty. Highly recommended!

Thanks for the review, Matt. I have this one coming to me from the Disney Movie club and am really looking forward to it.

I'm delighted that this is being released domestically in 3D. Does this foretell a new attitude towards 3D on physical media by Disney?

Johnny Angell said:
I'm delighted that this is being released domestically in 3D. Does this foretell a new attitude towards 3D on physical media by Disney?
Click to expand...

David Norman said:
Probably only is the name Pixar or Marvel precedes the names (and maybe LucasFilms/Lucasarts/SW -- whatever sublabel those might have hopefully)
Click to expand...

That's right. It seems the different production arms within the Disney organization are allowed license to release their efforts to suit their own individual needs. For that, I'm grateful.

Matt Hough said:
That's right. It seems the different production arms within the Disney organization are allowed license to release their efforts to suit their own individual needs. For that, I'm grateful.
Click to expand...

I thought even Pixar films weren't being released in 3D. The conversion of Ratatouille to 3D was not released in the US.

Johnny Angell said:
I thought even Pixar films weren't being released in 3D. The conversion of Ratatouille to 3D was not released in the US.
Click to expand...

I don't know about the catalog titles but the new movies have continued to be released in 3-D even after Disney threw in the towel.

TravisR said:
I don't know about the catalog titles but the new movies have continued to be released in 3-D even after Disney threw in the towel.
Click to expand...

I don't do 3D (unfortunately I'm one of those people with "stereo blindness"), but I liked the movie and will pick up the 2D version.

I just watched this 3D for the 1st time on my LG OLED and I was disappointed with the 3D imaging. I wasn't nearly as impressed with the sense of depth as Matt was - felt awfully flat most of the time to me.