Inside Llewyn Davis, the latest film from writers-directors Joel & Ethan Cohen, has elicited strong reactions from viewers, mostly positive but some of which are surprisingly negative. The movie has received a "fresh" rating of 94% from the top critics who are compiled at rottentomatoes,com, but the general audience has been less favorable, giving it a "fresh" rating of 76%. Knowledgeable friends who are long-time Coen Brothers fans have told me that they were disappointed by Inside Llewyn Davis, even as it was nominated for multiple Golden Globes, BAFTA, and Academy Awards. Their objections, I believe, stem from the fact that the story is less a coherent narrative than a series of vignettes which, at the end of the film, literally leaves its viewers where they started. On the other hand, the film features some quirky characters which are portrayed with gusto by excellent actors, wonderful cinematography which beautifully recreates the folk music scene in New York City during the early Sixties, and a terrific musical soundtrack supervised by T Bone Burnett. 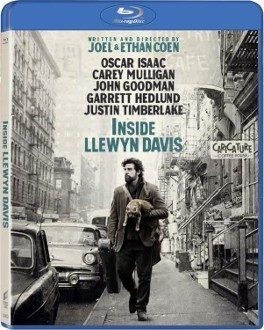 The 1080p image is encoded with the AVC codec and it looks exceptional, as we have come to expect from Sony Blu-rays. The film is properly framed at 1.85:1, with very slight black bands visible at the top and bottom of the picture. The film has a slightly soft look, which appears to be intentional, but it is highly detailed and pleasing. Colors are accurate but generally bland (the action takes place during winter and almost all of Llewyn's friends live in non-descript apartments). Nevertheless, the cinematography by Bruno Delbonnel perfectly captures the look of the early sixties, and it is enhanced by the terrific use of New York City locations.

The 5.1 HTS HD-MA audio is outstanding and Inside Llewyn Davis deservedly received an Academy Award nomination for Best Achievement in Sound Mixing. Dialogue is mostly confined to the center channel and is always clear and understandable. The soundtrack really comes alive when the music is playing, as it is given a wide and pleasing soundstage. The ambient sounds are also quite effective, in particular during the scenes when Llewyn is traveling on the subway and you almost feel as if you are on the train with him

The only extra on this Blu-ray is an impressive and informative one. "Inside Llewyn Davis" follows the making of the film from conception until its completion. The Coens point out that the character of Llewyn is based in large part upon Dave Van Ronk, a folk singer who was known as the "Mayor of MacDougal Street." The featurette gives the principal actors the opportunity to discuss their roles, and T Bone Burnett is on hand to talk about the desire of the filmmakers to film the music performances live. The featurette has a running time of approximately 43 minutes.

Fans of the Coen Brothers know that they specialize in highly original, quirky films, and Inside Llewyn Davis is no exception. Viewers who were disappointed with it almost certainly were put off by the meandering script which contains some great dialogue and humorous situations, but also leaves unresolved a number of major issues facing the characters. On the other hand, it does eventually explain why Llewyn is beaten up in the opening scene!

Sounds like my kind of movie. Definitely a purchase.

I loved this. I loved the music in it, the dark comedy, the storyline. I thought the moment where he couldn't face the idea of


Seeing his potential child in Akron
Was touching and sincere. It was one of my ten best this year. Great film.

I bought a "3-Disc Limited Edition" at a Vancouver-area HMV, for the same price as the Blu-Ray only version. It contains the Blu-Ray, a DVD with the same content, and a DVD of the concert film "Another Day Another Time". I don't see this online. Does anybody else out there have this set?

The French SteelBook contains the concert on BD.

Apparently(as of a few days ago) the French SteelBook release is supposed to be released in the UK as well(I'm waiting for it...if it hasn't appeared by May...I'll get the French)

This movie came and went so fast that I didn't even get a chance to see it theatrically.

schan1269 said:
The French SteelBook contains the concert on BD.

Apparently(as of a few days ago) the French SteelBook release is supposed to be released in the UK as well(I'm waiting for it...if it hasn't appeared by May...I'll get the French)
Click to expand...

Olympic hockey supremacy and the 3-Disc Limited Edition of "Inside Llewyn Davis" - I'm sure I could think of other positives about Canada, but for me that'll do.
The DVD of "Another Day Another Time: Celebrating the Music of 'Inside Llewyn Davis'" (1:41:21) is in anamorphic widescreen (1:78), with Dolby Digital 5.1 audio (448 Kbps). There are 18 chapters, but only a "Play" selection on the Menu screen. The sound and picture, from what looks like an HD master, are excellent for DVD.
It's a pretty great concert film if you enjoyed the music in the movie. I certainly did, though being old enough to remember what some wag referred to as "the folk music scare of the Sixties", I would say that by 1962 standards this music is pure ear candy.
You must log in or register to reply here.